The Southern XP646 is one of the smallest boats produced by the new owners of Southern Boats and it comes with a great heritage for quality, handling and good looks.

The XP646 HTO (Hard Top Open) has been designed as a boat to suit the everyday fisherman who still wants a boat that provides enough comforts for family outings. It’s very much the generic Kiwi all rounder and follows on from a similar theme found in all Southern branded boats. This model has been on the market for over five years now and has proven to be one of Southern’s most popular and enduring models. 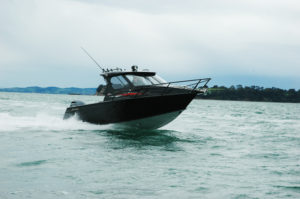 Sales today are as good as ever and although the boat has undergone some detail changes over those years, essentially it is still very much the same boat.  While not a ‘new’ boat in the true sense, it is now built under new ownership. Recently Southern Boats was sold to Aucklanders Peter Carlson and Noel Davies and the XP646 is just one of the boats on offer in the revamped model line-up. Carlson, owner of Family Boats, which was Southern Lazer’s biggest dealer, bought the company not only because he really liked the brand, but also because he could see a future for aluminium boats of such high quality on the local and overseas market. “Southern has always been regarded as one of the premium alloy brands, with an exceptionally high standard of finish and build quality, plus they go damn well”, said Carlson.
“What I want to do is maintain that upper status for Southern, where quality is more important than quantity”. Carlson says that production is now geared for about 30 boats a year from the Mosgiel, Dunedin based factory.

One of the first things he did was consolidate the model range and dropped –for now anyway – the Lazercraft name, in favour of calling all the boats Southern. He also discontinued the customised division of the business and concentrated on standard models of which there are now five. The XF576 is the only cabin version, with the XP646 (6.45m), XP696 (7.10m), XP746 (7.50m) and the top-of-the-range XP836 all hardtops that are either closed or open.

Kiwis certainly have an affinity for black and it’s a colour that in sport anyway tells the world who we are and sets us apart, so it was no surprise to see that the 646 XP that I was presented with to review was all black. It was obviously for a Kiwi owner! Interestingly, not only was the XP646 all black, but the owner had also ordered a larger XP836 and yep, it is also all black.

When you paint an alloy boat in a dark colour, especially black, you have the danger of highlighting any imperfections in the build. Not so in the Southern XP646. The hull is ‘bog free’ and the finish is exceptional. From any angle the boat shines without compromise and is a credit to the team of dedicated builders in the Mosgiel factory. Construction is all 5mm on the bottom and transom, with 4mm topsides and hardtop sides. The hardtop roof is fibreglass.

First Off The Line

The XP646 that I tested was the very first boat out of the factory under the new ownership and in black it’s certainly an awesome looking package. While all Southern Boats now come fully painted as part of the standard package, our boat was finished all over from the rubrails to the hardtop in Stealth black. The XP646 comes with a fully lockable cabin with a sliding alloy door. This not only allows you to stow gear inside with some security when you are away from the boat, but also provides privacy for anyone using the head inside. The layout is traditional, with twin berths made up of three squabs, each with storage under and all the sides and bulkheads are fabric lined so you see no aluminium anywhere inside. There are also further storage options in two deep upper shelves and the usual access hatch to get behind the dash.

The optional TMC head is built-in under the starboard squab and discharges straight over the side, although there is the option of having a holding tank. Should you have the anchor tackle bind up (unlikely due to the deep drop) under the Maxwell RC6 anchor winch, there’s easy access via a hatch in the forward bulkhead.

Protection from the Elements

Like all hardtop boats the protection from the weather, be it good or bad, is the most obvious benefit. The XP646 that I tested was the open hardtop version. In other words, it doesn’t have a full rear bulkhead with sliding or folding door, which in my opinion doesn’t really suit a boat of this size. Southern was one of the first to incorporate the more stylish fibreglass hardtops and cabins many years ago. This trend has continued still, although now only the hardtop roof is fibreglass, with the wheelhouse structure all alloy. The only other fibreglass in the boat is the helm which allows the builders to retain a nice aesthetic styling to this very visual space. Built into the hardtop is a control for the remote spotlight and a pair of Hella cabin lights, plus there’s room for a VHF if you prefer it mounted overhead.

The split level all black dash is roomy and allows for plenty of electronics and gauges. Across the top is a trio of Yamaha digital gauges which provide the skipper with everything from fuel, speed and trim to full engine mangement data. Centrally mounted below is a Lowrance HDS8 multi-function display (MFD). If you want something bigger then you could fit a 12” MFD. Our boat also came with a Fusion RA205 and the new unidock system which allows you to run both Iphone and Galaxy mobiles and a GME GX600 VHF. Strategically placed Hella cockpit and flood lights illuminate the wheelhouse and cockpit.

All the hardtop curved and flat glass, plus the sliding windows are toughened glass and the boat comes with a single, starboard-side wiper.

The seating layout is an area where Southern doesn’t mind you making your own choice and there are several. Our boat had the very traditional king/queen to port and a single, swivelling helm seat. However, twin back-to-backs are common and give you a little extra seating without encroaching too much into the cockpit.

Recently, I reviewed the larger Southern XP776 and the cockpit layout is almost identical, with the extra space certainly obvious from the wheelhouse forward. The XP646 has full length side trays either side, plus storage lockers under the aft deck. There is no underfloor space as this is all taken up with the fuel tank down the centre and bouyancy compartments either side. Dual batteries are mounted up high in one of the lockers, with the rest used for gear stowage. Alongside is a live bait tank with the picture window so you can see what your baits are doing!

I commented about the XP776 that the tubular steps either side were a great idea and so they are in the smaller XP646. Not only are they good for climbing in and out of the cockpit, but they are great to lash on items that may move about in the cockpit, such as cooler bins and even dive bottles with a custom made rack. The cockpit is finished in ribbed marine carpet that can easily be removed for fishing.

My test day was a reasonably choppy Auckland harbour with a 15-20 knot southerly, whitecaps and a nasty wee swell that took the edge off a comfortable, easy ride. This is a boat that I had to learn to drive. Firstly, when I ran at speed into the breaking short harbour chop I trimmed it hard in and pushed the throttle to about mid-range for a cruise of around 30 mph. I immediately found the ride was a little harsh, as the bow sections slammed into each wave. However, when I brought the trim back to about midway on the gauge, the whole ride and feel of the boat changed for the better and it also got quieter. The ride was comfortable, much quieter and just felt right. According to Carlson the hull is due for some changes, with future 646 hulls having the strakes stop shorter aft to decrease the stern lift and get the boat to ride more bow-up.

This is a very versatile boat that lends itself to a wide variety of uses. Fishermen will love the big cockpit, flat side decks and plenty of fishing-specific features. If you plan to go away overnighting, then there is an optional camper pack which allows you to enclose the entire cockpit. Drop down an air bed and you’ve got sleeping space for four. Toss in a freshwater shower, portable barbecue and you’ve got a really nice little weekender.

For those with a weight issue when towing, the Southern XP646 comes on a Southern all-alloy tandem axle trailer, so the all-up towing weight is certainly down on a conventional steel trailer. Towing weight is around ????kg.

This is certainly one of the better designed and better built aluminium boat brands and under the new ownership I am confident that it’s only going to get better.