It’s been eight years in the making and the final result is nothing short of outstanding. Kiwi designed and built cruisers are making a comeback and the new Admiral 10m is a boat at the forefront of that revival. When Jason Mckenzie and Steve Clement brought the Steadecraft Patrol 28 moulds off Trade Me over eight years ago, they had no detailed plans for the boat, apart from the fact they wanted to transform what was a blokes fishing boat into a more practical cruiser.

They also felt that there was a gap in the market for a boat of this size that was right on the edge of being trailerable or moored. At 3m beam, you can trail the Admiral with a special permit, but it’s more likely to be moored or kept in a dry stack.

While the basic hull was essentially retained, the original deck was completely remodelled and today’s Admiral looks nothing like the original. From the Steadecraft 28 Patrol there is virtually nothing left and while below the chine it’s unchanged, apart from a 250mm hull extension, there is no Steadecraft left to recognise.

“We built a new higher deck with more curve, put swage lines in the topsides, moved the saloon door bulkheads back 600mm to increase the cabin living space and built a one-piece inner liner, so the boat is effectively three large moulds; hull inner liner and deck, with lots of small moulds filling all the gaps”, says Steve.

The Portofino style boarding platform was also moulded as part of the deck and this increased the cockpit space considerably. Steve admits that while they had an idea of what they wanted to achieve in the end and the profile of the boat, it was very much a case of trial and error, with components made, analysed and either kept, dumped or modified. The result is a modern stylish small cruiser with soft, timeless lines that gives a feeling of being a lot bigger than it is.

“It took us eight years to finish mainly because this was only a part-time project for both of us as I was concentrating on my fibreglass business and Jason his upholstery company, so there was never a dedicated time frame to finish it”, adds Steve. In mid-2107 things started to crank up and the pressure was on to get the boat finished and launched for the 2018 summer. Well they nearly made it and the boat hit the water in early April this year. There was one goal, however, and that was to make the Hutchwilco NZ Boat Show, which they have managed to achieve. 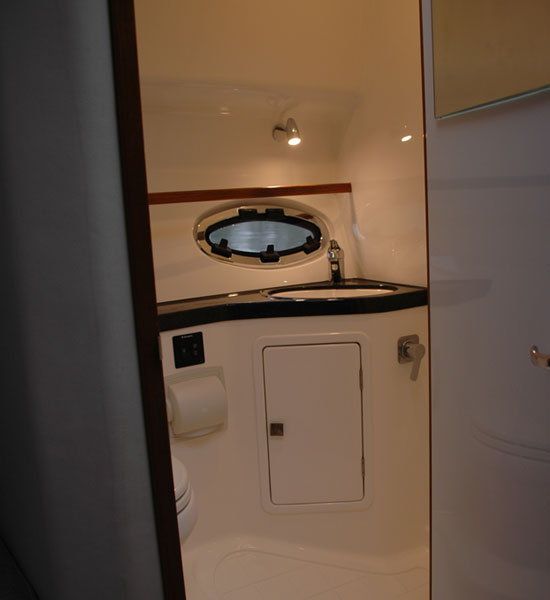 When I got to take the boat for a trial, it was raining and miserable in the morning and we only got to run the boat for a short time up the Tamaki River. First impression was the super slick transition onto the plane and how quick we achieved a top speed of 32 knots. Not bad for just 260hp. In the calm water, I found around 25 knots the ideal cruise speed.

The 12.5 deg hull is reasonably flat and is extremely responsive to the helm. One of the reasons is the Admiral 10m is fitted with a pair of Humphree X-Series interceptors, which offer stabilisation at any speed. They are not ordinary trim tabs. The Interceptor system creates a hydrodynamic lift force by intercepting the water flow underneath the hull. In that way, the interceptor creates a lift force acting on the hull instead of on the trim-device itself, which is indifference of the regular trim tab. The X-Series features ultra-fast servo actuators that react instantly to hull movements, as demonstrated in my high-speed manoeuvers. With advanced controls, the system operates very fast and with high precision.

At 25 knots I spun the wheel hard over and to my surprise, the bow dug in almost instantly and the boat hooked into a very sharp turn. The Volvo Penta DPH leg hung on tight and moments later I was on the plane and heading back down my previous track. Felt safe and the boat suffered minimal heel, although maybe I should have told my passenger before I did it!

With a complete moulded construction, the opportunities to customise the boat is limited, although items such as upholstery and timbers are owner’s choice. The builders have tried to present the optimum layout for what they feel most people would want in a boat this size and they have certainly achieved that. Perhaps the only significant changes available are in the cockpit, where you can have the choice of a central island with live bait tank, sink and bbq or wrap around seating and single access. As Steve says, not everyone is into fishing, so they wanted to be able to offer a more casual entertaining arrangement in the cockpit with plenty of seating.

However, if you are a hard-on fishing guy, then you can replace one of the transom doors for a pair of tuna tubes.

Talking fishing, the Admiral 10m has this covered, with a good size platform aft of the transom complete with a central bait station. You can add removable rails either side if you feel you want some extra security for the kids. A slide-away ladder slips in under the stern.

The accommodation is another area that came in for a lot of attention and by utilising the space under the saloon sole, Steve and Jason have managed to include a second cabin. The generous berth runs almost the full width of the hull and there is ample sitting headroom at the head of the bed. By using open treads on the companionway staircase and well placed Hella LED lighting, the aft cab feels quite open and spacious and not like a dark box.

The forward cabin has twin single berths below, with an infill to make a significant double and a single above on the starboard side. While Admiral #1 had a storage shelf to port, you do have the option of making this another berth.

Both share a dedicated head/shower compartment which has the usual features you would expect to find, plus over 2m headroom in the shower stall.

It’s one level from the helm to the transom, with excellent visibility through high windows and the lack of a rear bulkhead. Extra ventilation is available through sliding side windows as well as an overhead hatch. The main saloon is very Kiwi traditional layout with forwarding helm starboard and an aft galley port. In between, there’s side loungers and a dining table, plus further aft an entertainment centre.

The helm is a separate moulding and Steve says this was subject to a lot of changes. The result is a large facia capable taking a 16″ MFD and with plenty of space for all your other electronics and controls. The full adjustable single Hi-Tech pedestal seat, comes with seated or bolster the position. There is the option of a bench seat base with storage under.

Opposite is a settee that is long enough to make another berth and the dining table that can be either fixed or drop down. Aft, the galley is more than adequate for a boat this size and comes with a three burner hob, oven, composite surface, with storage above and below. Plates, cups and glasses are stowed in a deep slide-out drawer under the forward settee.

To starboard under the entertainment centre, complete with swing-out TV and Fusion sound system, is the fridge and if you require a freezer, then this can be incorporated into a settee box in the cockpit.

Alloy Bi-fold doors divide the cabin and cockpit and when everything is open it presents a seamless flow through the boat. The cabin top overhang has been adapted for storage of things you often need in the cockpit, such as a net, gaff, boat hook and cleaning gear. Another ingenious use of space. There is also storage both sides of the cockpit and in two large cockpit sole spaces. These are divided off from the engine bay but come with access panels to make working on the engine a little easier.

As for the power option, at this stage, it’s a single Volvo Penta D4/260 with a DPH leg and quite honestly that’s plenty. 32 knots was an impressive speed for the boat and a little more than I thought it would achieve.

It is pleasing to see another all Kiwi boat coming to market and Admiral Boats have certainly produced an outstanding example. It’s a stylish performer and certainly fits into a gap in the market for a local boat of this size. With its first public showing at the Hutchwilco NZ Boat Show, it will be interesting to see the reaction, but I’m picking that it may exceed expectations and the boys at Admiral Boats are going to have a busy time ahead with orders.