Barry Thompson makes his first ever visit to the historic Riverhead pub by water and experiences a very different style of boating transport.

IT’S AMAZING HOW you can live in a place for so long and yet still not see it all. I have boated all over the Hauraki Gulf, landed on just about every island, swum at countless beaches and fished most of the major reefs, channels and sand flats….but I have hardly ever been to the far reaches of the upper harbour. Until now.

In recent years, I have done a lot of boat testing in the waters above the Auckland Harbour Bridge, but always stop around Hobsonville and the Greenhithe Bridge. So when the opportunity to go boating into the northern most reaches of the harbour was offered, I was keen to check out what I had been missing. Our mode of transport was ideal for the journey, a custom made ‘party pontoon’ boat from Fusion Marine in Silverdale. The plan was to launch at Greenhithe and motor quietly the 4nm up to The Riverhead, stop for lunch and then return before the tide dropped too far and stranded us for the next 12 hours.

The upper harbour is extremely tidal and if you are planning a visit to the historic pub, you only have about 1 ½ hours either side of the high tide. Leave it too late to leave and you may find yourself wading through the mud to get to your boat. Judge it right and it’s a great trip. Judge it wrong and it’s a long wait at the bar.

The Fusion pontoon boat is all about space, with the full 2.5m x 7.6m floor span totally useable. In our sister publication, Alloy Boat (Issue 4) we recently ran an article on alloy pontoon boats, which are huge in the US and a growing market sector in Australia.

Unfortunately our rivers and waterway systems are not as pontoon boat friendly as places like the Gold Coast, but there are exceptions.

Fusion Marine have followed the pontoon boat trend, but with composites, from the infused 680mm pontoons – each with three watertight compartments- to all composite superstructure and deck. Trailerable weight is around 1500 kgs. The Fusion 7m pontoon boat is very much a custom built craft with the layout 100% owner driven. Boat #1 has been setup for day tripping and overnighting, with a compact galley unit, complete with twoburner stove, Engel fridge and stainless sink. A railmounted bbq on the aft rail also assists with cooking chores. 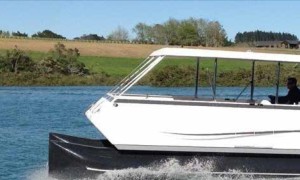 Opposite is a very neat ‘toilet tent’, which also doubles as a privacy area to change. To complement the overnight status of the Fusion 7.6m pontoon boat, there is also a pair of large single berths forward and dining table. A dropdown set of steps for ease of access to the beach is incorporated in the bow section.

The central helm has a dash large enough for the necessary instruments such as the twin Yamaha gauges for the pair of Yamaha 60hp High Thrust engines. Power is optional, from twin 25s through to twin 60s. All depends on how fast you want to go. The pair of 60hp Yamaha’s, running big blade area 11” x 14” props gave a top speed of 23 mph @ 6100 rpm. I only did that just the once to see what it would do and then quickly dropped back to a sedate ten mph @ 3000 rpm. This is a boat that deserves to be driven slowly. No rush, no pace, just a relaxed cruising mode. Quiet, calm and very very relaxing.

There is a choice of a completely open top, a soft bimini or as in our case, a composite hardtop with clears. This can be folded down for transportation or storage of the boat.

Fusion points out that the type of finish and layout style can be anything an owner wants, from simple, basic and practical to something that emulates the style and fit out of the latest US pontoon boats. Base price starts at $NZ60,000 for the boat only. 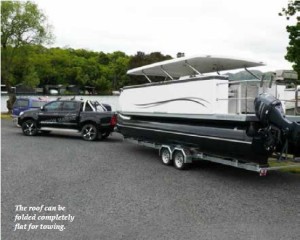 Riverhead is the township at the head of the upper Waitemat? Harbour, 31 km from central Auckland. In the 19th century, it was a centre for gum digging and a vital trading link with Helensville and the Kaipara. The river setting was also ideal for milling timber, flour and paper and in the 20th-century tobacco was grown.

The region around Riverhead and the neighbouring towns of Kumeu and Huapai is known for its vineyards. Riverhead was briefly a railway terminus in the 19th century, located at the eastern end of the isolated Kumeu-Riverhead Section. The line operated from 1875 and 1881 as a link from Auckland to regions north, with Riverhead acting as the transition point from ferry to railway. When the North Auckland Line connected Kumeu with Auckland via rail in 1881, the coastal shipping became unnecessary, and with no reason to continue operating, the railway to Riverhead was closed.

Today there are still a few two historic places left to visit in Riverhead, but it is the pub, The Riverhead, which is still attracting visitors and day trippers to the area.

The Riverhead was built on its current site before the 1870’s. It has been a house of hospitality with a continual liquor license since then, being the second oldest in the country.

Mr Thomas Deacon, who built the tavern, had a ‘liquor shop’ on the bank of the estuary to the south. This spot had shallow entry from the water, ideal for the Maori coming up the waterways so they could beach their waka on the beach. They then ‘portaged’ their craft the 3 or 4 km to the Kumeu River to gain water access to the Kaipara Harbour which they would then be able to navigate right up to Dargaville and their Northern lands. Essentially the pioneers followed this same route (because there were no roads or railway in the area at the time), but they needed deep water dockage for their 27m steamers.

Thomas Deacon saw the value in this and positioned his new tavern on the knoll and a large wharf was built to accommodate the growing numbers of people arriving and transiting through the area on their way north. Later Aucklanders would come to the same spot for their weekend breaks. There are many articles on the walls of The Riverhead showing these excursionists and the vessels they used to arrive in throughout the 1800s and early 1900’s.

The tavern has always been a favourite with both the local people and a destination for those with boats who knew how to navigate the upper harbour and a favourite drive on the weekend from Auckland, now being only 25 minutes on the motorway. However, over the years the dock fell into disrepair, before being reinstated by the new owners of the tavern, who have plans to double its size in the near future due to demand.

Ferries (The Red Boats) from Auckland come up regularly on the high tide bringing thousands to The Riverhead yearly.

The tavern was renowned through the years for its excellent hospitality, but fell into disrepair around the 1990s before being bought by Paula and Stephen Pepperell in 2010 who closed it for 9 months while they extensively renovated it.

It is now a favourite destination once more, with a variety of places to eat, drink and meet, from the Landing Restaurant, the neighbourhood Portage bar and The Boat House functions venue. The Riverhead is surrounded by 100-year-old Oak trees and has a long flowing lawn, outside bar and unique BBQ Adaso grill and wood-fired pizza oven. It is now a firm favourite attracting a wide range of people, who come to enjoy the free music, a few drinks and a relaxing meal on Sunday afternoons.

I can highly recommend you make a visit to The Riverhead, if not by boat, by land. You will not be disappointed.