This Brady 38ft trailerable power catamaran has a central module that slides inside the hulls on the trailer but extends out to make the overall beam 16ft on the water. There have been several reducible beam sailing multihulls developed over the last 40 years with the best known being Ian Farriers Trailertri’s, but there doesn’t appear to be the same development undertaken for power multihulls.

My involvement with variable beam multihulls began in the early nineties when I developed the Campa Cat series of sailing catamarans, using the trailer to bring the hulls in and out on swinging arms and swinging the middle pod section up and over the hulls when trailing.

The opportunity to revisit the concept presented itself in late 2018 when I was approached by Justin Clarke, the owner of JPC Engineering in Toowoomba. He had a vision of a sizeable trailerable power catamaran that could fold up for the road but could also be used as a caravan when transiting in caravan parks when travelling the often very long distances in Australia to remote cruising grounds.

The result was the Transformer Cat which at just under 12m, is as long as can be trailed using a light truck and turntable set up which doesn’t require permits in Australia. However, the concept will work down to 7m, which may be more practical for people towing with a large car or 4WD.

By extending the Transformer Cats beam from 2.4m to 4.8m, Justin and his family will not only gain 22sqm of extra living area over a standard trailerable width powerboat but will also obtain the relaxed lifestyle that stability brings.

The extra beam will move the accommodation layout into a level of space and privacy that cannot be achieved by either a power catamaran or monohull based on the standard trailerable width of 2.4m (8ft). 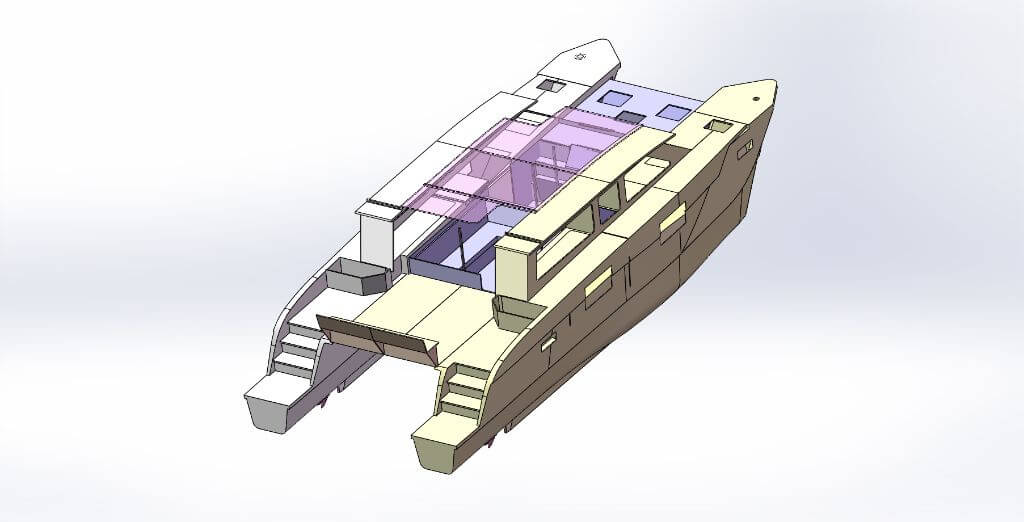 I have designed the Transformer Cat 12 with a displaning hull form to cruise economically at 15 knots and a top speed of around 18 knots, powered by 2x 70hp high torque outboards. The majority of the hulls and topside panels will be lifted from our variable dimension power cat moulds and a section with a flatter run aft grafted on to support the weight of the outboards being located further aft than my usual inboards would be. The Transformer Cat will be constructed from infused composites featuring solid glass bottoms from the keel to the turn of the bilge, with cored construction above this. The central pod section will slide into the hulls so a great deal of detail has had to be worked through in regards to how the layout will work and in waterproofing the joins. The fit-out will be lightweight using cored panels, and the interior finish will be painted for minimum weight, with comfortable simplicity the key.