Barry Thompson goes north to the picturesque Whangaroa Harbour to test Buccaneer’s latest addition to its Exess range and finds a boat that has a remarkable family resemblance.

A thick dense fog engulfed the entire historic Whangaroa Harbour as we stepped aboard the Buccaneer 565 Exess. I was a little apprehensive as to finding our way out to the harbour entrance, let alone taking any pictures. We had just driven up from Auckland, in perfectly clear skies and it wasn’t until we turned off State Highway 10 that we entered the surreal beauty of Whangaroa Harbour completely enveloped in a sea mist.

Boarding the boat at the marina, you could hardly see 20m ahead, but Buccaneer Boats MD, Gerry Gerrand was totally confident of finding his way to the heads, even when the GPS on his Formula Icon, which we were using as a photo boat, stopped picking up a signal. With the help of radar we very carefully edged our way down harbour and out into the open sea. The 565 Exess tucked in behind the launch, cautious not to stray too far off line and into the black abyss.

Anyone who knows Whangaroa Harbour knows that the entrance is not very wide and in fact it was totally missed by some of the earliest explorers who sailed right past, oblivious to the magnificent deep water harbour that lay behind the towering rock cliffs.

The dense fog remained with us right until the harbour entrance. Beyond lay a clear blue sky and calm seas. It was one of those unreal winter days that make you appreciate the magnificent boating waters we have around this country. How fortunate we were to be out amongst it all. Some days I really love my job!

The last time I was at Whangaroa Harbour was also to test a Buccaneer, the then new 635 Exess, so it was only right that I should head back to the same venue to test the very latest in the Exess range. Buccaneer first launched the Exess range in 2001, with the Exess 635 and since then has added four more new models, of which the 565 is the latest and to date the smallest to carry the Exess name. There is a definite resemblance to the 605 and in fact it’s really just a smaller version with a lower sheer angle. The cabin styling, internal layout and even the way the boats are built are all from the 605.

While the deck is mostly new, with some ‘cut and shuck’ from the 605 moulds, the hull is an unchanged 550, as used for the Esprite, Billfisher and Classic. Released in 1997 the hull was first used under the 550 Classic and as Gerry says, he couldn’t really see why he should come up with a complete new hull when the one he already had was as near as perfect as he could design for a boat this size.

The 565 branding came about as a point of difference from the existing 550 models, although dimensionally it is practically the same. The boat is actually 5.65m from just under the bow to the end of the transom.

Also, like all new models now from Buccaneer Boats, the anchor locker has plenty of fall and is big enough to handle 100m of anchor tackle from a hands free winch. This means the forward bulkhead is moved back but does mean the cabin berths are a little shorter than those on the 550 Classic – a small price to pay for the convenience of an auto anchor system. 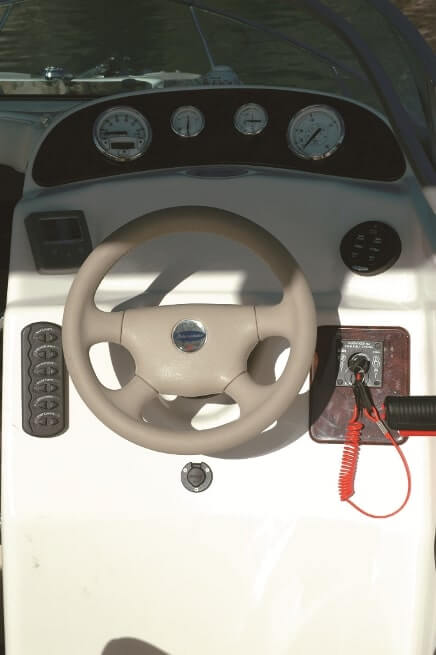 The 565 also has a full inner liner from gunnel to gunnel, which is bonded to the hull and all cavities are then foam filled for extra buoyancy. Beneath the floor is a fibreglass top hat section which is bonded to the hull using a Plexus adhesive. The 565 Exess complies with the new CPC flotation regulations. Buccaneer has also gone away from using plywood for the main flooring areas and side panels, preferring the more durable and longer lasting polymer board. In fact, the only wood left in the boat is under the stainless deck fittings and around the engine mounting area of the transom. Using a CNC router means that all the side and floor panels fit exactly ….. first time.

The 565 is rated for outboards 115hp – 150hp and depending on your needs, both ends of the horsepower scale perform well. A 115hp gives you excellent economy with enough power to pull up a skier and then there’s the added bonus of less financial outlay at the start. Top speed is around 42 mph, depending on engine choice.

For the test we had an almost new Evinrude 150 ETEC, swinging a 19” stainless prop. Best I could get on the GPS was 48.7 mph @ 5200 rpm. By trimming out, I could get the engine to rev out to 5400 rpm, but the propeller efficiency and speed dropped accordingly.

In the calm conditions we headed across to Stephensons Island at 4500 rpm @ 42mph and on the way back late in the afternoon, when the wind had picked up and there was a bit more lift on the water, I found dropping back to 4000 rpm @ 38 mph was just perfect. The four of us aboard got a very comfortable ride.

With a slight side swell on the way back from Stephensons Island I found a little starboard tab levelled the boat nicely.

I also ran our decibel meter to see what the difference was over a various rpm range. All readings were taken from a central point between the forward seats. If you are into low speed trolling then I can highly recommend the ETEC for its quietness and smooth low speed operation. At 500 – 1000 rpm our gauge recorded a very conservative 64-66 dB. At 3000 rpm this climbed up to around 84 dB, 3500 rpm to 86 dB and 4500 rpm to around 90 dB.

The 150 ETEC was very responsive throughout the rpm range and when you pull the throttle back you need to tell your passengers, as the stop is almost immediate. Acceleration is just about as quick.

As expected, in the calm conditions the 565 wasn’t really ‘tested’ and it was totally predictable at every speed. Using a combination of the engine trim and the Electrotabs trim tabs you can get the boat running really sweetly. 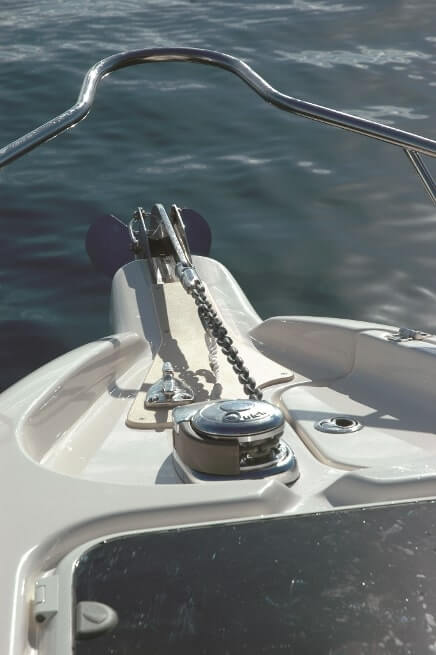 The helm position is excellent, both seated and standing, and the fold-down canopy has been designed so it doesn’t get in your way when driving. A full wrap around screen handrail is also a nice touch and very necessary when driving hard in the rougher water.

Our test boat was equipped with most of the extras on the option list, including a Thetford Porta Potti in the cabin. Buccaneer will also fit a TMC electric toilet and there is a privacy curtain available for around the cabin opening. Twin berths have a large infill to make the usual double and moulded storage bins are provided under each side squab. Extra storage is available in the wide side trays that run around the entire perimeter of the cabin. A custom-made flush mounted Weaver overhead hatch is one of the quality standard features, which include interior lights, stainless rod holders and hand rails. There are never enough storage compartments as far as I am concerned and as I have said before I always look as to where I can put my cellphone. The 565 Exess has plenty and I liked the wide fully lined trays either side of the forward seats, plus the full-length side shelves complete with fixed rod holders. Aft of the 165-litre stainless fuel tank there is also a large rear underfloor wet locker – not ideal to toss fish in but large enough to take a plastic fish bin.

However, the seating is where the 565 really delivers the goods on storage. The king/queen back-to-backs on the port side hinge up to reveal a massive dry storage area. Opposite a single swivelling bucket seat also provides some extra storage in the fibreglass base.

Due to the upstands being integrally moulded into the floor liner there are not really any seating options other than the back-to-backs and single helm, plus two aft jump seats. Another back-to-back can be fitted to replace the single helm, but the downside is that it takes up a lot useable cockpit space when fishing. However, if you are not into fishing but plan to use the boat for day cruising and family trips then the double back-to-backs would be fine. Overall, the cockpit is designed for fishing, without going to the extreme. It’s also well suited to general family boating, such as towing water toys or heading off to a bay for a day’s picnic.

The Buccaneer 565 hasn’t been introduced to replace any models, rather add to them. The 550 Classic will remain for some time yet as a ‘classic kiwi boat’, which is unquestionably one of its best selling attributes. Due to the fit-out and construction techniques used in the 565 it is considerably more expensive than the 550, but then you are getting a whole lot more for your money.

Gerry says that he would rather build fewer boats but of a high quality than just keep pumping them out the door to get the numbers up. The 565 Exess is certainly high in the quality stakes and by incorporating the very latest fibreglass building methods, Buccaneer has turned out one hell of good little boat. Its pedigree is unquestioned and winning the ‘All Purpose GRP Under 6m’ award at the Auckland Boat Show has also helped its future success. 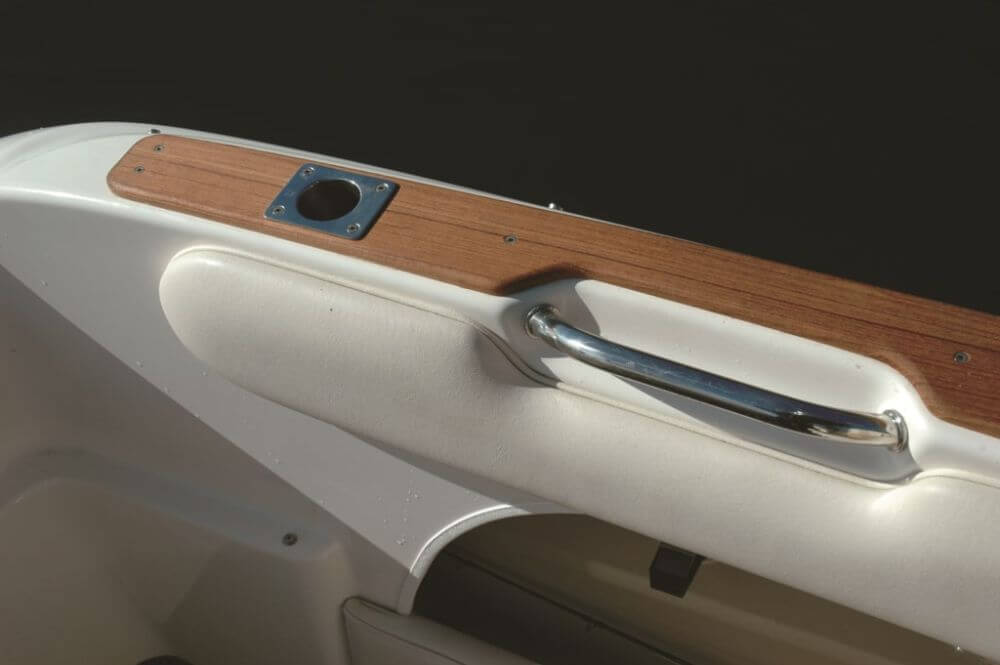