Graeme Wingate is an icon of the sport of offshore powerboat racing and while he spent many seasons through the formative years of the sport as a competitive driver, in later years he was New Zealand’s representative on the UIM, the world governing body for all forms of powerboat racing.

At one stage Graeme held an all-time record of 80 races and 80 finishes until a race in Auckland saw him destroy his Evinrude V6 with a catastrophic internal engine failure. Much like many of the local competitors, Graeme started in 1973 in a family cabin boat, and then got the ‘bug’. This led to his having a specialist race boat designed by Rex Henry. Graeme built and raced the very successful 16ft (4.88m) Coranto which was powered by a 75hp Evinrude. Coranto went on to win the D Class championship for three years, but by the late 1970s Graeme wanted to move up to something bigger and faster, so it was an obvious choice to turn to Henry for his next boat.

“I wanted a boat that would match the speed of Warwick Irvine’s Mr Inmetals, which at the time was the boat to beat in B class and we certainly achieved that”, adds Graeme. Mr Inmetals was doing 72-74mph and had an enviable reputation as a moderate to rough water boat. When Chindit was launched in January 1979 at its inaugural race at Taupo, the plan was to use the race as a shake down and not only run the motor in, but also get used to the handling of the new boat.

“We were about midway through the race when we thought we would gun it and went on to win our first race”, says Graeme. Top speed was just over 70mph, but Graeme and crew Laurie Hyland knew there was a lot more to be had as they had not done a lot of prop testing before Taupo.

The first prop choice was a thru-hub cleaver that was loaned by Ron Archer. Ron had worked his magic on the prop and despite Graeme’s trying several other props, Ron’s one proved to be the best prop for the boat.

However, before the season was over and after some serious prop research and development, a three-blade chopper had Chindit’s speedo showing around 75-76mph and the boat quickly proved to be almost unbeatable.

“We were very competitive in that first season as we learnt more about the boat, and managed to take out the class B championship, the first of a trio (1979-1982) as well as the overall New Zealand championship in the 1980-81 season, so I was pretty pleased with the boat right from the start,” says Graeme.

By the second season the crew had changed, with the young Brett Archer doing the co-driver and navigation chores. His brother Ross Archer moved into the co-driver’s seat until Graeme sold the boat at the end of the 1982 season, having set his sights on something a little more radical – a V8 outboard powered tri-hull. “This took a lot longer to build than I planned and unfortunately it was not a success, so after a disastrous 1990 World 3D championship at Auckland I parked it up until the 1992 season and finished second in the class. My son Peter also raced it for a while, with a lighter Johnson 225 (the engine that is now on Chindit), but it never proved to be competitive”, Graeme added. It now awaits a new keen owner.

At the end of the ’82 season, with three class championships and a NZ championship to his credit, Graeme sold Chindit to Aucklander Norm Jepsom who repowered the boat with a Mercury 150 to run in Class C. After the sudden death of Norm, the boat changed hands once again with offshore stalwart, John McDonald taking over the helm and he repowered the now famous offshore racer with a Yamaha 140. 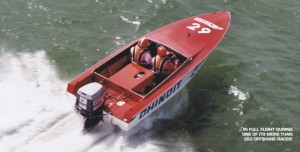 Next in line was Keith Sinclair who raced the boat for a while until his son Andrew took over the driving chores. Chindit next moved south to Thames under the ownership of Greg Crawford, before moving back to Auckland when it was sold to Joanne Lomax. Throughout its ‘new’ ownership career Chindit still remained a competitive boat no matter what class it ran in.

However, after over 30 years of racing and an estimated 250 plus races, it was showing its age. Interestingly, in its entire racing career and under a raft of owners, neither the name of the boat nor its colour scheme was ever changed.

The name Chindit was derived from 2nd World War history of “Wingates Chindits”, a special force trained in commando methods to infiltrate behind the Japanese lines in Burma. They were known as the Chindits, a name given to them by their leader, Major-General Orde C. Wingate, DSO.

Although there were improvements and modifications done to the boat over those years, essentially it remained much the same as when Graeme built it over 35 years ago, even down to the fact that the race number on the hull has always been either 29 or 290. Three years ago the boat went full circle, with Graeme’s son Peter buying it and setting about a restoration programme to bring this absolute classic back to its original and former glory.

For the past three years the boat has undergone a total makeover, from putting the tunnel back into the hull (a previous owner had filled it in with a plank), to a total repaint and reengineering. After three decades of hard racing the boat was still absolutely sound apart from some minor issues around the transom and where the battery was mounted. Construction-wise it was still perfect, a tribute to the workmanship and skill of Graeme, who built the boat under his house in evenings and weekends, while running his successful electrical and home appliance stores.

“The boat is now as original as we can get it, even going back to the cable steering, and the original steering arm, plus a Johnson 225, which is about the same horsepower as the old Johnson 235 we started with”, says Graeme. The Gibson trim tabs had to be replaced with Bennett tabs as finding replacement parts for the long since discontinued Gibson’s proved too difficult.

When the boat was designed by Rex Henry he was given an 18ft maximum overall hull measurement as that was the biggest that Graeme could build in his garage at that time. While it was a scaled up version of Coranto it did have a few tweaks that Graeme felt the boat needed, such as a finer bow entry. Part way through the build the designer had been in discussions with Australian designer John Haines who had been experimenting with a tunnel plank design. Henry approached Graeme and suggested that this might be worthwhile incorporating into the new hull.

Fortunately it wasn’t too far advanced into the build process and so Graeme was able to make the modifications to the standard deep V hull and add the tunnel. “In theory it looked good, but I was never really sure it would work until we had the boat on the water”, says Graeme.

Construction of Chindit took around 12 months, with Graeme doing all of the building himself. Kauri frames were used as the base with some laminated American oak strengthening and Oregon pine stringers and it was all covered with coachwood ply and then sheathed with a layer of fibreglass cloth. When first launched it had a race weight, including engine but not fuel, of around 400kg and even for its time was one of the heavier boats in the class.

Why has Chindit been such a successful boat? “I think one of the main attributes is that I put so much emphasis into the building of the boat, especially the strakes which I got as straight and sharp as I could and so all the planing surfaces were perfectly true, with no hooks or angles that were not meant to be there”, said Graeme.

Graeme is also quick to point out that with the help of Rex Henry they got the balance of the boat as perfect as they could so it always ran well in most conditions. In fact when first launched the crew seating was probably further forward than was fashionable at the time, but the boat proved to be perfectly balanced.

“Look at pictures of Chindit today and most times you will see it’s flying flat and not pointed skywards, which to me is a sign of a well-balanced boat” adds Graeme.

Back to the Future 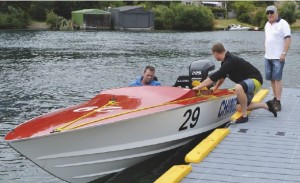 After 30 years, can Chindit still remain competitive, especially with the high-tech composite boats that are racing today? Graeme agrees that the new boats are lighter and probably quicker, but he thinks Chindit will hold its own over a season and while the first race recently at Taupo in January was more of a shakedown and learning curve for son Peter and grandson Kane, the results were encouraging.

Chindit finished 2nd in the Sport 225 class and what is surprising is that for that first race the team chose to run that original 28” Mercury Chopper propeller that was on the boat for a lot of the 1979-80 season.

Will Chindit’s name be back on the championship winning trophy for the fourth time by the end of the 2014 season? Watch this space!