Without doubt, the Clipper Explorer 50PH is a true pilothouse design with a raised upper level helm station, which is separate from the galley and saloon area. This a boat of two halves, with a distinct separation between the two, due to a solid wall dividing the upper and lower areas, unlike the Cordova Series which is Clipper’s flybridge trawler which is a one level boat from cockpit to helm. An added bonus of the raised pilothouse is there is now the height and headroom to incorporate a full beam master stateroom beneath. Brett Thurley, MD of Clipper Motor Yachts Australia, says that one of the reasons for the introduction of the new Explorer 50PH was so that existing Clipper owners could step up into a boat that was well suited for more long term passagemaking and liveaboards. “We see a very different buyer for this boat than a Cordova, one who is probably older and going to spend more time on the boat and doing longer passages and
cruising”, says Brett. So, if you are going to market a boat as true cruising pilothouse design, then you have to make sure that the pilothouse/wheelhouse is perfectly conceived both in its practicality and functionality. When I stepped up to the pilothouse on the Explorer 50PH, it was obvious that a lot of thought had gone into making the area as perfect as possible.

From the aluminium side doors for easy access to the bulwalks, the aft forward facing bench seat for the guests or a ‘second’ skipper on long passages, to the triple panel toughened glass screens with individual wipers and the comfortable Marine Tech helm chair, everything is right. The Teak and Holly sole, Anigrie timbers and lightly toned leather fabrics add a traditional look to the pilothouse. 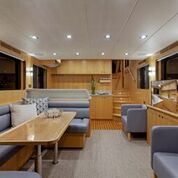 The driving position is excellent with great visibility. Although the vessel is fully air conditioned, if you like a bit of natural fresh air at times, the cross ventilation with the pilothouse doors open and a couple of overhead hatches takes care of that. What you decide to have on the helm is your choice and there are plenty of options. Our 50PH had a single Raymarine E165 Hybrid Touch MFD in the centre of the leather dash, flanked by all the necessary gauges, switches and controls. The handcrafted Teak and Anigrie steering wheel is a nice touch.

There are two basic accommodation plans offering either two or three cabin layouts. Of the first three boats sold, the owners have all opted for the two cabin layout, although there has been some variation in the stair access. In the two cabin option there is a full beam master aft and VIP double cabin forward, each with their own en-suite and large double berths. 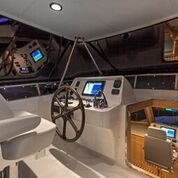 Access is via a curved staircase from the starboard side of the pilothouse.  The forward VIP has excellent headroom, copious storage and plenty of natural light. While our 50PH was finished in vertical grain Anigrie panelling in the VIP, you have other options, such as soft fabrics or shiplap panelling if you want to go for the more traditional look. In the three cabin layout there is a VIP forward with a double to port and twin bunk berths on the starboard side. Two ensuite bathrooms are shared by the three cabins and access is from the centre of the pilothouse. All bathrooms feature composite surfaces with raised porcelain bowls, teak slatted floors and large shower cubicles. If you are planning on serious passages or living aboard I would highly recommend the two cabin option as the full beam master is spacious and very cosy. It’s also positioned on the centreline of the boat, which is always a better place to sleep than in a forward or side cabin. The master has loads of storage in lockers and drawers, a separate vanity or small office area, three opening portholes and the diamond veener accents within the doors illustrate the high quality of fit and finish throughout the vessel.

Little things like that certainly make a difference. “We are continually upgrading our boats and it may be as simple as higher quality door handles, latches and LED lighting or the way the handmade air vent ducting is incorporated into the design, but every change is part of our commitment to presented our boats to the highest standards”, added Brett. 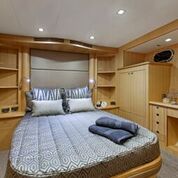 As flybridge’s go, this one is a doozie. Overhead a fibreglass hardtop covers the forward section, with Strataglass panels all round. This is a party layout, with the business end forward looking after the secondary helm, complete with double Marine Tech helm chair, (two single seats are an option) a mid section with L -shape loungers running down either side with a couple of adjustable tables (dining or coffee) and a bbq ,wetbar area aft. An Airtex double stage hatch allows you to keep the access to the pilothouse open, but offers the security especially if you have small children aboard. 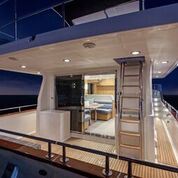 The aft deck can be used to stow the tender, with the assistance of a crane, but the owner of our boat had decided on an ADC transom lift, which I personally think is a better option, especially if you are getting on in years. The ADC rise and fall system is effortless to use and takes a lot of the hassles out of crane launching/retreiving.

The saloon layout is very conventional with the galley forward and access to the pilothouse. Should you choose the three cabin option, you will loose some galley space, but what’s left is still generous. The galley is a very traditional style U shape with all the necessary equipment such as the Smeg four burner hob, combo grill microwave oven, dual door Isotherm fridge/freezer and a composite bench top with double underbench square sink. There are storage lockers above and below as well as plenty of drawer space. Saloon seating is provided with a couple of tub chairs either side of a 40” pop-up TV, with a U shape lounger opposite. The extra large dining table has height adjustment, so you could turn this into an extra double berth. Fusion speakers are set back into the headlining, with some great sounds available when the party moves downstairs. Stainless steel rear sliding doors open into the cockpit, where there is a fridge/freezer, optional teak capping rails and in this boat the owner chose ladder access to the flybridge. Standard is a full fibreglass moulded staircase with storage built-in under.

The standard boat doesn’t come with any cockpit seating, with Brett leaving the choice of that to the owners when they take delivery of the boat. A single transom door leads to the ADC rise and fall platform, with all the necessary blocks and cleats for the tender. Brett points out that the cockpit is open to customisation and can easily be modified to suit an owner’s needs. “We can even add around 600mm to the transom if an owner want’s a bigger cockpit”. 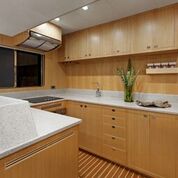 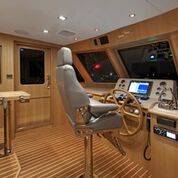 The Explorer 50PH is based on a semi displacement hull form that is slippery through the water and with a single engine returns exceptionally good performance and fuel figures. It’s a boat that carries a lot of beam forward which not only offers more internal space in the accommodation area, but also means the pilothouse is brought forward and higher than in the Cordova Series.

Handling and hull reaction is very similar to the Cordova, with an easy low transition onto the plane and with a pair of Cummins QSB 6.7 480hp engines has a top speed around 19- 20 knots and planes around 14 knots. It’s a great boat to cruise around 16.5 knots if you are in a hurry to get somewhere, but drop that back to 8-9 knots and you can sit back, relax and enjoy the journey. Having a full keel you have the option of running a single or twin engine format. Power options are limited to just about anything in the Cummins range, be it single or twin. The standard base engine package is a single Cummins QSB 380hp with an optional APU get home unit which runs from the generator, if you want some redundancy from the single engine configuration. If you are after something a little quicker, then a single Cummins 550hp will return a speed of around 17 knots. “The requests are certainly more for the twin engine package and of the first three boats sold, two owners have chosen the twin Cummins QSB6.7 480hp engine package and one a single Cummins QSB 380”, says Brett. Built in China, the Explorer 50PR is constructed in solid grp to the same high standards of the Cordova series. The flybridge is a sandwich construction to minimise weight without compromising the strength and rigidity. All fuel and water tanks are grp, with baffles and cleaning manholes. The Explorer 50PR displaces approx 25 tonnes. There is a choice of three wood finishes from the traditional Teak, the more contemporary American Walnut and the lighter Anigrie.

It is a great testimony to the brand, for the fact that the first three Explorer 50PHs sold, are all to owners upgrading from previous Clippers. With the ability to customise the internal layout, each owner has chosen a different path. In boat #2 for example the access from the cabins to the pilothouse is very different and the galley smaller. 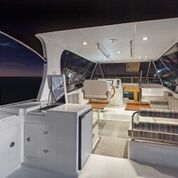 While boat #1 is what Brett would like to refer to as the standard layout, he says that just about anything is possible and he is always happy to discuss an owners requirements and do what he can to accommodate them. Also to come from Clipper Motor Yachts is a smaller 46PH which will be a little brother to the 50PH, with similar styling and layout arrangements, including a full beam master, plus there’s a 58PH.