Trailerable aluminium boats have been around for 50 years or so and while at first they were rudimentary open rowing dinghies, the larger ones even handled a small outboard. As trailerboating developed, so too did aluminium boats and by the late 1960s small aluminium boat construction was coming of age.

Since then tens of thousands of aluminium trailerboats have been built and today they account for a major percentage of all new production trailerboats built in the country. So what happens to all the boats and more importantly what sort of condition might they be in today? Aluminium boats, like timber or GRP ones, still require a certain amount of tender loving care (TLC) and left to suffer on their own can become corrosive nightmares. It may take twenty years, or it may take six months, but if an aluminium boat isn’t set up right (electrically and mechanically) and isn’t looked after then you can expect a whole leaking bucket full of problems.

In recent well documented cases, we have heard complaints about paint simply peeling off in sheets, aluminium floors being eaten away and corrosion so bad that entire hulls and transoms have had to be replaced. Today’s major aluminium boat builders generally build a good solid boat and it’s not generally until the engine, instruments, electronics and all the extras are fitted that the problems occur. However a lot of problems can be prevented if firstly the installation is 100%, right down to the type of screws, washers and spacers used when rigging the boat.

One of the most commonly asked questions with regard to second hand alloy boats is how to repair corroded areas on the boat. The simple answer is you can’t entirely, however you can prevent a major corrosion from happening if a few rules are followed. Nyalic do have a coating system that covers repairs and halting of further corrosion, ensuring the corrosion has been addressed. Any aluminium boat, by virtue of the marine environment, is liable to corrosion attack. The severity of this attack will depend basically on how well the boat has been designed and built, and on the material used and what happens to it when in and out of the water.

Some manufacturers pay little respect for corrosive traps when designing a boat and build in ‘hidden areas’ where preventive maintenance is almost impossible. The trailer boat, in addition to being drained out after use, will probably be hoseddown with fresh water and may to some extent dry out. Although fresh water does not prevent corrosion, it is not as vigorous in its attack as seawater, which contains 3% – 4% of sodium chloride. In other words if you don’t wash your aluminium boat at all, then the corrosive cycle simply speeds up.

For the boat on moorings or at a marina berth, the risk of damage by corrosion is much greater, even when care has been taken in the specification of all materials used in the construction. Often this can be caused by other vessels close by that may be expelling corrosive electrical currents that will also attack your hull. Boats operate in an environment where spray can leave a high concentration of salt on every surface it touches. In New Zealand and Australia high humidity is common, thus is provided an invitation for above waterline corrosion to become established, the existence of which may not be suspected until a failure occurs. It should be remembered that many of the well-known corrosion resistant materials depend for their immunity on the existence of a natural film of oxide on their surface. When this film is removed mechanically and is unable to re-form due to the absence of oxygen, corrosion resistance is lost. This is where the surface coatings come into play. With the availability of so many paints based on epoxy, vinyl-alkyd polyurethane resins and other high tech resins, it is advisable to obtain the advice of an expert prior to purchase.

There are a number of major forms of corrosion in alloy boats and all can be avoided in some way with care and attention to detail. Marine corrosion is both widespread and damaging in its various forms, but it can be controlled once the basic cause is established.

When any electrical current is forced to leave a metallic conductor and flow into seawater, rapid corrosion will occur where the current leaves the metal. The most common cause of such stray currents is the use of a metal hull as electrical earth, either directly or indirectly. 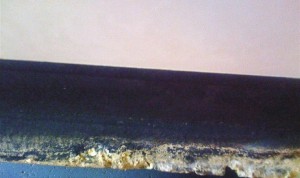 The grounding of any part of an electrical system to a vessel’s fittings is bad practice and invites corrosion. All electrical circuits in either wooden or metal hull craft should be two-wire and fully insulated, and should incorporate a separate insulated common earth lead or busbar.

Storage batteries should be isolated when not in use by removal of both leads or by means of a suitable heavy-duty double pole isolating switch. When it is appreciated that the equivalent of one ampere flowing for one year will cause the loss of approximately 9kg of iron, 10kg of copper or 35kg of lead, the importance of avoiding stray current corrosion cannot be over emphasised.

This is a common form of localised corrosion found under sand, scales, dead shellfish, old bait and fouling. It is due to a local oxygen deficiency setting up a corrosion cell, especially in crevices between metal surfaces. It is interesting to note that of all the boats I have repaired, the biggest percentage would be from this type of attack due to leaves and pine needles not having been removed from under-floor areas.

Often the areas under the floors are never looked at by an owner until really necessary. What may look like a small corrosion problem where the old Nautolex covered plywood floor meets the hull and transom, could very well be just the ‘tip of the iceberg’. Particularly in older alloy boats, where often the floor was simply screwed to a sub-frame, this problem all too frequently occurs. 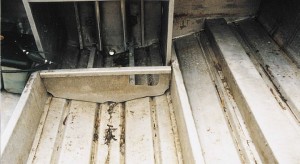 The corrosion issues with Plywood floors and attachments has occurred where tanalised ply has been used. The tanalising gives off tannic acid in solution along with other compounds which over time leach onto the aluminium causing pitting corrosion cells and ultimately holes that can be disastrous if not addressed.

It would be excellent preventive maintenance to take the time to actually lift the floor and clean out all those hidden areas, before you put the boat away.

This usually occurs at the junction of two metal surfaces, especially under lap joints, washers, rivets and loose bolts even if of similar composition. As with deposit attacks, this form of corrosion is basically due to oxygen deficiency. Corrosion products may build up to the extent of forcing joints apart. Both deposit attack and crevice corrosion can be particularly active at the noble end of the galvanic series, including the stainless steels. Stainless deck fittings, bronze washers and alloy decks don’t make for happy partners!

Galvanic corrosion is caused by the flow of electric current set up when dissimilar metals are in electrical contact with an electrolyte such as seawater. This current flows from one metal to the other through the seawater and returns through a metallic circuit or any other electrical conductor that may exist between metals.

The direction of the flow of current will depend on the nature of the materials; the one from which the current enters the water forms an anode and will corrode and the other forming a cathode, will not suffer corrosion. While the current actually flowing may be very small indeed, it is a continuous process and the resulting corrosion can reach very serious proportions.

This is the form of corrosion that can occur quite easily on the surface of any unprotected metal immersed in an electrolyte such as seawater. Minute differences of electrical potential can be set up by variations in the physical condition of the metal surface, by the shape or composition of the metal or by local stresses and work hardening.

These differences result in the formation of a number of small electrochemical cells over the metal surface from which current can flow through the metal in one direction and return through the seawater. The areas where these minute currents leave the metal to enter the water are called anodes and are corroded, whilst the areas where the current re-enters the metal are not corroded and are referred to as cathodes.

These electrochemical cells are in themselves quite small and there is often a constant interchange of the anodic and cathodic areas, resulting in a condition of fairly even all-over corrosion.

If there is no interchange however, corrosion occurs in the form of pitted areas where the pits may be relatively deep for the area attacked.

A common trend at present to ‘clean-up’ an alloy boat is by acid washing that can bring a whole new set of problems if one is not mindful of the basics in dealing with such acids. Phosphoric acids and sulphuric / hydrofluoric acid mixes are the common acids used for the cleaning of alloys and depending on the percentage of acid present will determine the ratio at which you should mix the acid with water.

Whichever acid is used, the process must be completed from start to finish, especially if one is to coat the finished product with a paint system or to a surface protection polymeric resin such as Nyalic. Acid washing will degrease and deoxidise only as well as it is applied. Streaking is a common complaint but is easily remedied by further application of the cleaner or washing off immediately with copious quantities of water.

All acid washed surfaces requiring paint finishes will also require a neutralising wash. This process will be generally achieved with a mixture of water and baking soda, followed by a detergent wash. However, other alkaline type washes are available from the acid
manufacturers. 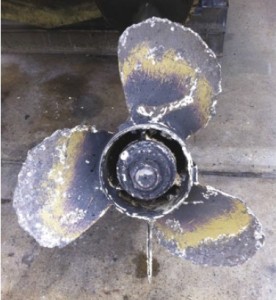 In short, seek professional advice prior to using this type of cleaning medium or risk harming firstly yourself and maybe the environment. Not to forget that if the product is overcoated with a paint system, it may do everything but stay on the alloy.

It is interesting to note that the owner of a brand new alloy boat who uses it every day and trailers it home and then fastidiously cleans it with harsh detergents and commercial cleaners is probably doing himself a disservice. The act of vigorously cleaning bare alloy boats removes the protective oxide layer and promotes the discoloration of the alloy, sometimes to the extent that it will turn almost black.

Remember that harsher detergents, being alkalis, are caustic in nature. It is better to use a soft sponge and a non-alkaline cleaner sparingly and rinse off with plenty of clean water, especially inside the boat where most of the serious corrosion is likely to have occurred.

Contrary to popular belief, aluminium boats are not maintenance free and whilst it is true they are tough and will stand the knocks and hard abuse, they still require some regular ‘TLC’. Properly looked after, an aluminium boat should last for many years and give you endless hours of enjoyable boating.

Hooked Up Down South