When you see boats like Humdinger you really appreciate just how strong the Kiwi custom boat building industry is and it also reinforces to me the exceptional high quality workmanship of local builders.

Humdinger epitomises the Kiwi classic custom boat-building heritage, which fortunately is still alive and well, despite the economic conditions. Bill Upfold is unquestionably one of the most talented of all our local designers and has for many years earned himself an enviable reputation when it comes to motor yachts in the 14-20m range and none more so than his signature aft cabin mid-pilothouse boats, of which Humdinger is his latest creation. 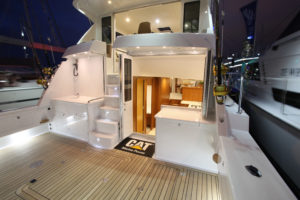 However, what separates Humdinger from most of the previous Upfold designed Elite Motor Yachts is that this boat is designed for serious fishing. Check out the 21 rod holders, twin tuna tubes, 24-volt sockets for electric reels, live bait tank, underfloor refrigerated catch freezer, dedicated tackle drawers, a brace of gold Internationals, outriggers and an Elite game chair, then you quickly get the idea that the owner has a passion for fishing. Humdinger is armed and dangerous!

That fishing is certainly not going to be confined to the local fishing grounds, with plans already to take the boat to Tonga and maybe other Pacific island fishing hot spots. With a 3200-litre fuel capacity, provision has already been made for serious passage making and long stays away.

While you wouldn’t be wrong in referring to Humdinger as a sport fisherman in disguise, Upfold points about that sport fishing boats like this are not new. The most successful game fishing boat in New Zealand ever, Lady Doreen, built in 1951, was an older style but a very similar concept to Humdinger – a good omen perhaps for the new boat.

The owner of Humdinger is someone who would kindly be referred to as a ‘high end user’ when it comes to boating and in his previous boat, a 42ft Upfold sportfisher, Kiwi Blue, he logged over 2000 hours in four years and in that time landed 36 marlin. When he went looking for a replacement he still wanted to retain the best attributes of his previous boat for sport fishing, but liked the idea of incorporating that into a mid-pilothouse design for family cruising.

After some consultation with Upfold and Scott Lane Boatbuilders, the final plans were drawn up and construction of the boat started in February 2012, with launching a few days prior to the 2013 Auckland On-The-Water Boat Show.

While Humdinger is based on a completely new hull design, the accommodation and saloon layout is very much standard for a mid-pilothouse Upfold design, although the owner has gone for single berths forward, especially for when he takes his mates away fishing. The big departure from previous mid-pilothouse boats is that it has been very customised towards sportfishing. 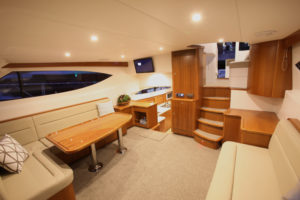 This has not only been transformed into all the fishing accessories and dedicated spaces, but also sees an aft helm in the bridge, rather than the traditional forward station. This has been done purely for fishing so the skipper has full view of what’s happening in the cockpit. A swivelling single Marine Tech Voyager helm chair is central.

The helm features a pair of MFD Raymarine 17” Hybrid touch screens plus extras such as Flir night vision camera and controls for the Maxpower bow thruster and Volvo Penta BTS (Boat Trim Systems). 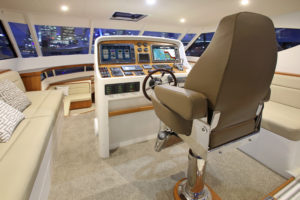 Destined to be a very popular spot during the day, the bridge has another large lounger forward and the mandatory wet bar. A neat feature is the dedicated rod locker under the port squab. The rear bridge doors also open wider than normal, thanks to four doors which concertina either side and the cockpit overhanging dodger top has been cut right back so as not to impede the vision from the helm.

Aft seats on the upper deck are also designed so that anyone sitting outside is facing towards the stern and can see any cockpit activity and also keep an eye on the trailing lures. It’s only a few steps from the bridge to the cockpit via the central stairway should you need to rush down to join the action. The overhang above the upper deck helps keep out some of the UV rays.

The cockpit is serviced with four Hella floodlights that spread a full 180-degree beam which is great when broadbill fishing at night as it allows you to see what direction your lines are running. Forward on the port side is a sink unit and Plancha barbecue hot plate, with a dedicated tackle drawer below and extra storage.

To starboard is a freezer, plus there is plenty of under coaming storage. Being a gamefisher, all hatches in the cockpit sole have inflatable seals so there’s no chance of water ingress when backing up on a fish.

A bi-folding door arrangement which opens up the boat from the cockpit to the galley is a departure from the usual drop-down window and sliding door that I have seen in other Elite mid-pilothouse boats. This really opens up the space and with no central pillar gives uninterrupted views right through to the saloon.

This is still a dual-purpose boat, catering for both family cruising and serious fishing trips and the layout reflects that. The upper bridge is set up as a very social area, with loungers and bar fridge and is destined to be used a lot during the day. The lower main saloon I would see being the popular area to relax during the evening and at night.

The layout is reminiscent of previous Elite mid-pilothouse boats, with two L-shaped loungers and a dining table to starboard, plus a pair of ottomans to offer seating for eight around the table. There’s a port side bar, with the main entertainment and switchboard in the centre between the stairway to the bridge and lower galley. Interestingly despite the aft cabin design, when sitting on the starboard side lounger in the main saloon you still have excellent visibility right through to the transom.

With the extra length in the cockpit, the aft cabin has been compromised, plus there is now no space available for a built-in dinette area in the galley, as found on the larger 16m Elite mid-pilothouse designs. The trade-off is a huge composite galley vanity running full length, which is great when you have a big crew aboard to look after.

Under the bench there’s a double fridge, gas oven and hob, dish drawer, rubbish bin and dedicated crockery and storage areas both above, below and in a large pantry. I noticed the fiddle around the Smeg 4-burner hob, to prevent the kettle from sliding away in rolling seas. The port side owners’ stateroom has a large queen size double with storage under and above, with access to a combination ensuite and day head. The way this boat is to be used it is likely to be the primary head. 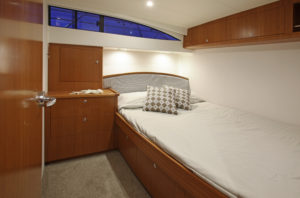 Quarter sawn teak is used throughout the boat and finished in semi-gloss varnish. Being a custom boat, you can have just about any timber you want. 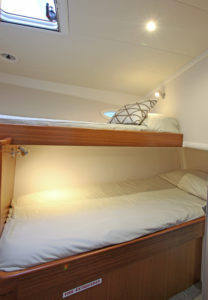 With the emphasis on fishing as well as family cruising, Humdinger has been configured with plenty of berths, spread over three cabins, plus large loungers in the saloon areas. The forward cabin has three berths with a single and ‘cuddly’ double overhead and a single below. Storage is limited to under the berths, but while no space is available for a hanging locker, the storage options that are provided are very generous. Guests share the one toilet/shower area which is finished with high gloss painted surfaces, including the vanity and recessed bowl. The shower stall with glass door is generous in size.

To starboard is the second cabin with two large singles, a dresser unit and plenty of storage under the lower berth. The rear bulkhead incorporates the custom made Seamac engine room door for dayaccess to the very spacious and fully carpeted engine room. Wherever possible Acoustica sound insulation has been used and I was impressed with the clean and clinical layout of the engine spaces, with everything easy to reach and clearly defined. My son, being a diesel engineer, I know would appreciate working in such a well-designed space. 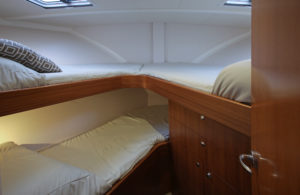 The engine room also incorporates the washing machine and a dive compressor, with the filling station in the lazarette.

Humdinger carries a traditional raised South Carolina sheer with an accentuated bow flare, a radical departure from most Elite mid-pilothouse boats. This not only gives the boat more of the look of a sportfisher, but the extra reserve buoyancy forward is a bonus when running in hard conditions. 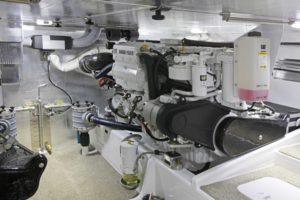 Humdinger’s hull and superstructure is built using a combination of timber, balsa and 6mm ply covered with fibreglass, with the hull finished in International 900 Ice Blue and the deck and superstructure in Vistal White. The two colours compliment well and make a change from the traditional solid white. Humdinger is the eighth Upfold Elite design built by Scott Lane Boatbuilders and like all that have gone before it, the layout is very much customised to suit the owner. He obviously knew what he wanted and the result is outstanding.