Exploring Our Kiwi Heartland By Boat

New Zealand’s coastline is studded with harbours, rivers and inlets, but it’s surprising how many boaties turn their backs on our hidden corners, like the launch owner I met in Tauranga who, in three years, had not once turned up-harbour from his marina berth.

While he had a paranoia of running aground, trailer boat enthusiasts need have no such fears. Although they may not at first appear glamorous places to explore, creeks and estuaries can provide excellent boating. If you take time to look there are plenty of quiet waters to explore. The places you will find are modest, generally forgotten, far from the beaten track, but true Kiwi heartland.

Semi-sheltered as it is, the Hauraki Gulf can blow up. Whether it’s El Nino, La Nina, or just plain El Windy, the more open waters are often no place for small trailer boats. Especially when the comfort of family, especially “Her Indoors”, is concerned. But that doesn’t mean that frisky weather need spoil your boating — especially if there’s still a bit of sun about.

This month’s Hidden Corners features three rivers or estuaries in the Mahurangi region. Each has its headwaters in the Kaipara Hills, with mouths only a few kilometres apart near Kawau Bay — one of the Hauraki Gulf’s prime boating regions. Puhoi and Matakana can be knocked off in a half day, while the Mahurangi requires a full day.

Like many of our hidden corners, these three rivers have played important roles as pioneer nautical highways. Puhoi, on the southernmost of the three rivers, lives in folklore and history as one of New Zealand’s distinctive non-British pioneer settlements. Matakana to the north, is less exotic, but probably more productive, while the Mahurangi, the largest, in the middle of the picture, developed important early regional industry and looks set for resurgence. 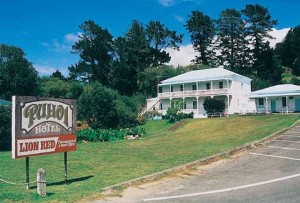 The Puhoi River is tidal and anything bigger than canoes must work the tide. As with all three rivers, the trip must be planned with the tide, starting about two hours before high water. A handy place for launching is at the popular Wenderholm Regional Park. The ramp is good, though it slopes gradually. The only trouble with this option is that the trip upriver is short and you miss the beauty of the bush-lined entrance.

If the weather is reasonable you can launch at Waiwera, or if the weather is westerly, Hatfields Beach further south, or perhaps at one of our other three rivers, or even from the Whangaparaoa bays.

Brazier Rock, a meaty reef, lies off the entrance to the Puhoi River. In a decent swell the waves break all about the rock and to the north towards the headland, so give it a wide berth. The channel is close by the steep north head and inshore you will spot a beacon marking the starboard edge of the channel. On the Wenderholm Park side waves will often break, but if you keep to starboard the channel opens up around a tight curve. Once inside, the river broadens and splits into two channels, with extensive sand flats in the centre — the port branch going past the Wenderholm ramp. Take it slowly once in the river; if you do run aground the effects will be less dramatic, besides, a five knot limit is in force and canoeists, particularly school groups, are often about.

Following the channel’s twists and turns is part of the fun and after a few (non-nautical) kilometres, and after passing under Highway One, you will see the buildings of Puhoi settlement. If you have timed it right there will still be an hour to go to high tide and you will have time to tie up and cross the road to the historic, and no less famous, timber pub, or to walk around the village.

Tide waits for no man, especially at the head of a creek, but the day can be rounded off nicely with a barbie back at Wenderholm, where the kids can plunge into the water from the rope swings beneath the pohutukawa, or swim at the clean sandy beach. 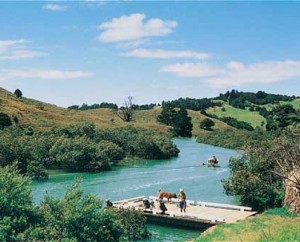 Puhoi, meaning ‘slow water’, was settled in the early 1860’s, by people of German origin. They came from the West Bohemian plain in what we now know as the Czech Republic. Promised ‘a wonderful country overflowing with milk and honey,’ the first eighty-three settlers who landed at Puhoi, on June 29 1863, were dismayed to find steep hill country, covered in dense bush, stretching as far as the eye could see.

The settlers nearly starved in the first two seasons, but were helped through difficulties by local Maori. In time land was cleared, and farming was supplemented by logging, and a split-shingle roof trade.

Communication with Auckland in the early days was entirely by sea — at first by cutters and scows. In 1876 a regular steamer service was begun, continued by the steamer Kotiti up until 1924. By the mid 1880’s Puhoi was a thriving settlement, with weatherboard houses, post office, store, school, church and pub. Three thousand acres of steep hill country was in pasture and the population had grown to 400.

Today, as commuters from as far as Wellsford make the daily journey to Auckland, and day trippers motor by in air conditioned comfort, it seems remarkable that only one hundred and thirty years ago, pioneer settlers faced a harsh struggle to settle this beautiful valley.

The best launching point for this trip is at Sandspit in Kawau Bay, or Scott’s Landing just inside the entrance. The Mahurangi Harbour entrance is guarded offshore by Te Hapua, or Saddle Island, now administered by the Department of Conservation, and a great place for swimming and picnicking. If it blows up from the west the sandy beaches opposite on the western side of the entrance will be more pleasant. Casnell (or Manganui) Island, lies further up on the eastern side of the channel, another DOC area. Signs of ancient Maori settlement are obvious in the terracing, although it is not believed to be a fighting pa site. Nearby is Scott’s Landing and ramp, and under the big macrocarpa trees, Scott House, a handsome historic colonial building. In summer the house is open for inspection.

Pushing on up river you leave Grants Island to starboard, before picking up the first channel markers. From here on, the channel twists and convolutes and a good lookout must be kept; yet sizeable yachts and launches proceed much farther yet.

As the valley narrows, mangroves crowd the banks and the river takes on some extravagant curves, marked still by sometimes faded beacons. All the while the scene closes in and becomes increasingly wooded. Coming as a surprise are the huge chimneys of the derelict Wilson’s Cement Works — used now as a small marina. Just around the bend is Robertson’s boatyard and jetties. After two more wiggles, there’s the town of Warkworth, nestled in the hills and sprawling down to the river. 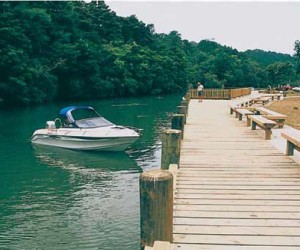 Warkworth’s civic leaders have had the foresight to once again make a focus of the quayside and river. There is now a new wharf, estaurants, cafes, trim lawns, picnic tables and good access between town and quayside. This is something often so lacking in New Zealand coastal development. The atmosphere is almost European, the scenery, definitely Aotearoa.

If your boat is large enough, there is sufficient water in the channel for an overnight stay, as long as you moor yourself carefully. It’s a charming scene and you will doubtless be the centre of attention for the picnicking motorists and riverbank strollers — not to mention an army of ravenous ducks.

In 1834 HMS Buffalo was the first recorded European ship inside the heads. She was in the area collecting and accessing kauri spars for the Admiralty. Fine stands of kauri then clothed the banks and surrounding hills.

Plentiful kauri attracted shipwrights John, Geo and Thas Darroch, builders of scows and coastal craft in the later 1800s. Further upriver Nathaniel Wilson constructed the cement works in 1884. The works used limestone quarried on site, fired by coal from Hikurangi. The works was a substantial operation, until its closure in 1902. Workers were housed near the town and two substantial residences still remain; one for the manager near the river, and the other for Wilson himself, naturally, on the hill overlooking the town.

The Mahurangi River was Warkworth’s supply line, from the town’s founding around 1853, right up until the late 1920’s. Only then did road transport make any real impact. The Coastal Steamship Co. opened up the Mahurangi service, followed by the Northern Steamship Co. The Kapanui and Hauiti were famous vessels on the run. Today, Warkworth is a thriving town, buoyed by lifestyle immigrants from Auckland, beach house owners (many can hardly be called baches now) and folks who have found a picturesque place to retire. 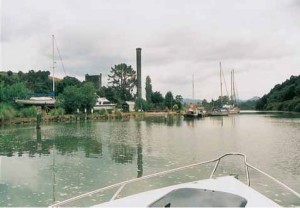 Matakana and its river mouth at Sandspit are more usually associated with Kawau Island, which forms the sheltered Kawau Bay. It’s one of the Gulf’s prime spots, so it’s natural perhaps that few boaties venture up-river. However, the main branch of the river is navigable to Matakana and the run from Sandspit is well worth doing. Though narrow, the harbour entrance is deep. Markers make it easy to spot the channel, well up against the high ground on the starboard side. Opposite is a big area of sand which dries, but a little sand beach, flanked by a grassy reserve and sheltering puriri, has more water and is a great picnic spot. Sandspit wharf and boat ramp are busy places, with boats and ferries coming and going often. On the end is a shop, handy for snacks, drinks, ice creams and takeaways. At the foot of the spit is the Sandspit Motor Camp, a family oriented place, with safe high tide swimming for little ones.

Beyond the wharf the river branches. The west fork beyond Lees Boatbuilders meanders several kilometres, but is mainly unremarkable, unless you have a small boat which can penetrate right into the headwaters, until the way is blocked by a rock shelf and cascade, set in remnants of native bush. The Matakana channel turns to the right. It’s unmarked, so you will have to work out its twists for yourself. After narrowing through mangroves, the river winds even further, with patches of bush, right to the waters edge. The final extravagant turn unexpectedly unfolds the view of the Matakana Wharf, boat ramp and a reserve with picnic tables. The journey’s navigable conclusion is right here too, a shady waterfall tumbling down over rocks into the river.

On any summer high tide, there will likely be kids fishing from the wharf and it is just a short stroll into the village where there’s a cafe and craft centre.

Matakana’s history is less colourful than that of Puhoi or Warkworth, but shares the maritime legacy of many early New Zealand towns, built on the banks of creeks, which formed part of the only practical transport network at the time. The first European settlers lived around Sandspit prior to 1840, mostly occupied in the kauri trade. By the 1850’s the town of Matakana had been surveyed to form the basis of an agricultural community, to take advantage of the good local soils.

The region prospered; logging and shipbuilding featured early on, but in time a dairy factory was built (now the craft centre) and significant orchards were also established. A steamer service began in 1870 and continued well into the 1930’s, carrying dairy products, fruit, vegetables and eggs to the Auckland markets. A shark processing factory at Sandspit was sited across from the present wharf, fishing the apparently huge numbers of sharks then found in Kawau Bay right up until 1925. Once again man upset one of nature’s balances; today sharks seem no more common here than  elsewhere.

Outboard vs Jet vs Shaft vs Sterndrive