“We’re targeting this boat at families, more importantly the wives of the bloke who’s buying it, because let’s face it, the wife always gets the final say in the decision making process.” Speaking with Ross Christensen, Managing Director of Fish City, I had to agree with him.

Whether we like it or not, the boss always gets the final say in something, especially if you’re making a purchase such as a boat. As the saying goes ‘Happy wife, happy life.’ “We’ve added in many features and options that will get the tick of approval from the ladies.”

So perhaps I should look at this boat from a female perspective? Can I even think like a female? Shit, if I could, my life would probably be a whole lot simpler.

The FC540 is essentially a scaled down version of their popular 580 model which they released late last year, and I also had the pleasure of testing.

As the FC580, the new FC540 is a bit of an all-rounder, targeted at those who want a bare and robust fishing tinnie, with a generous cockpit space for fishing, fantastic stability due to its flooding ballast system and now a large casting platform on the foredeck. But also a boat that can easily be transformed into a versatile and practical family boat for a great day out on the water.

One trick bit of engineering that is a big feature on the FC540 are two built in stability systems. Aft, there is a flooding keel, which floods when the boat is at rest, making the craft ultra stable, then when underway the water drains out quickly. Then in the forward section next to the helm there is a con-trollable ballast system, enabling the skipper to bring onboard the desired amount of the forward ballast, and then to dump it when it’s not needed. 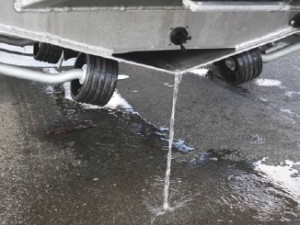 A simple release valve is located near the helm to easily control the amount of water. Extra safety comes in the form of a sealed floor and flotation foam under the side decks.

“The 540 is packed full of safety features that are very important to the female buyer. It’s stable, has nice high sides, has a good sized cabin, and bunks can be fitted to give the kids somewhere to escape too.”

As you step aboard, the open layout firstly sees an adequately sized boarding platform is on either side of the outboard pod, with the port corner featuring an aluminium boarding ladder. A grab rail has also been welded onto the rear of the transom to aid in re entering the boat from the water – great for divers and kids clambering back aboard after playing in the water.

The transom area has a built-in shelf that ideal for storing any miscellaneous items such as tackle boxes, etc. as well as housing all the boats onboard systems such as a battery. 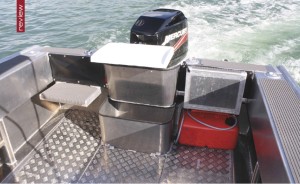 The cockpit is fairly sizeable, with long side shelves running right up to the forward seating area. Two welded rod holders, each side, are situated along the coamings with a further two situated in the transom. Other features include a passive live bait tank, which fills itself when at rest; a large under-floor storage locker and cockpit side shelves.

Seating consists of two pedestal seats which swivel the 360 degrees, a great feature that allows you to rotate the seat to face aft and have somewhere to sit while you watch your line. Should you want a different seating configuration, a king/ queen style arrangement can also be fitted – a better option if you’re looking at a more child-friendly layout.

Additional seating is available in the aft corners which on this test boat came in the form of lift up seats. The lift up seats are great as they allow you to get into the corners when playing that fish. These are fitted as an option, standard specification sees fixed corner seats fitted.

At the helm, small storage shelves are on either side, a great place for keys and cell phones. A handrail runs right along the edge of the forward dash area, and is great for passengers to grab onto when underway. Further forward in the well-protected cuddy cabin there is more space just to store gear out of the way. 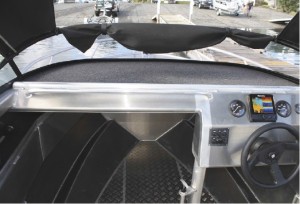 Bunks with storage underneath can be fitted if required, an option that mum and the kids will no doubt tick off. Above, a large aluminium deck hatch provides access to the forward casting platform and excellent access to the anchor locker.

As I recall experiencing on the bigger FC580 model, and likewise on the FC540 stability was fantastic. With two people to one side in the cockpit, the boat hardly shifted. Underway, there was excellent visibility forward through the curved windshield, which provided great protection from the wind when seated. Our test boat had a bimini fitted, with the centre canvas piece able to be zipped down out of the water. The only change I would make here would be to make the centrepiece clear plastic, so then in not so favourable conditions you could still stand to drive.

Extended gunnels and a raised sheer line provide minimal access around the sides to the foredeck; I cannot see this being used, given there is an enormous deck hatch, which you could almost drive a bus through. This gull wing design that has been successful in its smaller models, also lends itself to making the 540 very dry.

Powered easily with 60hp through to 90hp, the FC540 will achieve 42mph with the maximum rated power, while a 60hp two stroke will see it reach 32mph. Fuel storage comes in the form of two 25 or 45 litre tote tanks. Our test boat package comes with two tote tanks, which rest on the floor in the aft corners. While you cannot have an underfloor fuel tank as that area is used for positive buoyancy, there is space to store up to four 25L tote tanks. Tote tanks are a feature especially if you opt for the larger twin 45litre options. It means, you do not have to haul the whole boat down to the petrol station to fill up, just take your empty tote and you’re good to go. 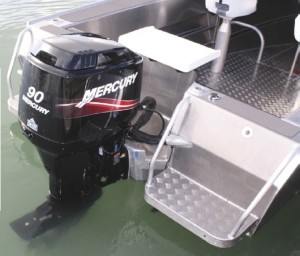 Power options for the FC540 are from 60hp through to 90hp outboards. Our test boat was fitted with a Mercury 90hp two-stroke outboard, and I felt was a good match for the hull. The 90hp pushed the boat along to 42mph with next to no gear and two adults onboard. A 60hp Mercury two-stroke outboard will push the 540 along to 32mph, and if fitted with that option, packages start from $35,995.

Back at the ramp, the FC540 is easily handled back onto its single axle trailer. Given the size and weight of the boat; beach launching is easily achievable, as well. This one was priced as tested at $39,995 and included the Raymarine fish finder. I think $39,995 present fantastic value for money, you’re getting a 5.5m alloy boat on the water that is packed full of safety features that many other boats out there don’t even come close to achieving. So will she like it?

I think she will. Once she understands how very safe the 540 is and how it will open up a whole host of boating activities for the family, she’ll be well and truly onboard. Excuse the pun.