With the Fleming 78, you are free to explore virtually anywhere in the world, from the upper reaches of the Amazon to the Fiords of Norway or cruising around the icebergs of the North West Passage.

The F78 is a completely updated replacement for the original Fleming 75 that the yard has been building since early 1999. The main differences on the exterior are that the hull is longer and carrying it aft under the swim step provides a greater waterline, more buoyancy aft and greatly increased storage space in the lazarette.

The 78 also have a bulbous bow, which has been designed specifically for this boat to provide reduced fuel consumption at speeds from 8-12 knots.

The F78 has many improvements on the interior including new systems, new crew cabin layout, improved engine room and machinery room layouts. There is a comprehensive central monitoring system with three 15” colour touch screens and new engine instruments.

This 80-ton yacht has been built to qualify for European CE certification for Ocean Class, and she presents the ultimate balance of rugged construction, engineering excellence and artful elegance.

Fleming prides themselves on building boats to the highest quality, with safety and convenience given top priority in the design of all deck areas. All hardware was selected for durability and functionality and much of it, such as the stainless steel cleats and roller-chocks, was designed and made specifically for the vessel. 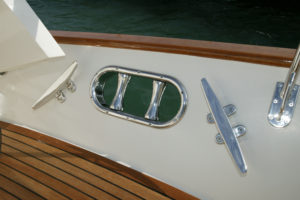 The foredeck platform has been set up for twin, matched Maxwell Model 3500 hydraulic anchor windlasses. Solid stainless steel fairleads are bolted through the bulwarks to allow the capstans to be used for warping.

The teak oval-section handrail has been brought inboard for security and additional stainless steel handrails are provided on the top of the non-skid cabin trunk for the convenience of children as well as providing tie-down points for optional cushions. 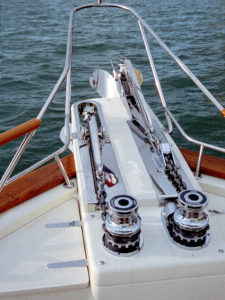 Solid doors, assisted by gas springs, give access to the forward deck to port and starboard from the wheelhouse onto the Portuguese bridge. Forward-facing windows have 9mm thick tempered glass for ultimate strength. Wide, well-protected side decks run down both sides of the boat with sturdy stainless steel handrails and the bulwarks have inward-opening doors. The spacious aft deck is surrounded by a wide caprail and fiberglass skirt concealing engine room air intakes and mood lighting. Warping winches to port and starboard eliminate the labor of adjusting mooring lines. The inward-opening transom door gives access to a 36″ deep swim step with nonskid surface.

Two lockable hatches provide access into the lazarette. A teak-dressed step across the aft face of the California deck provides seating and a place to put equipment for activities such as scuba diving.
The California Deck features a fixed settee around a teak-topped table. Access to the boat deck is provided by a curved ladder with radiused teak treads and oval section stainless tubes.

The flying bridge area is divided into two levels and has three distinct functional areas. The upper level is effectively an open-air pilothouse, which features a helm station with full engine, and thruster controls, instrumentation and a unique electronics console, which retracts into the flybridge structure when not in use. An aft-facing L-settee area includes a table and space to starboard for a bench-type freezer. The forward portion of the lower level is primarily for entertainment and is equipped with seating for a dozen people around a large table. Forward is a combo fridge/icemaker plus double barbecues and sink beneath a folding lid. 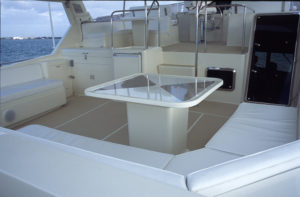 Aft of the seating area is the boat deck equipped with a 4.2m 1500 lb. capacity stainless steel davit. The boat deck will accept tenders up to 5.2m mounted fore and aft. Also on the boat deck is a lift-up hatch providing access to the California deck and cockpit. Available as options are hardtops for the upper bridge and for covering the seating area on the lower level.

With a combined area of 32.5sqm, the saloon, galley and dinette spaces flow together to form a luxurious yet functional area made even larger by the extension of the saloon onto the California Deck through the aft doors. Teak and holly soles are standard throughout as are wood mini-blinds recessed into the window frames The saloon is left empty in the standard boat and is built to suit owners’ requirements. The dinette area comes standard with a curved banquette, oval dining table, and storage cabinets with sculptured glass doors at the forward bulkhead with a granite top. Designer lighting is installed over the table with a dual circuit dimmer control. The galley features a 5.4m length of granite counter with a composite double sink, overhead lockers, ample drawers and storage and extensive appliances

The accommodations are reached from the pilothouse via stairs, which widen and flatten out as they descend into the forward lobby. The accommodation is similar to past boats but has been refined, and the forward VIP cabin has twin berths rather than the queen. The owner’s stateroom features a kingsize bed, which lifts hydraulically for easy access to a large storage area under it. A curved bureau with mirrors is on either side of the bed. Teak cove mouldings along both sides of the stateroom and a curved soffit over the bed contain concealed lighting. There is a walk-in closet, a desk with ample drawers and a space designated for flat panel TV. The owner’s head features a shower stall or optional whirlpool tub with a thermostatically controlled mixer valve in a fiberglass-lined enclosure. The port guest cabin is available with either twins or a double berth with an optional upper slide-out berth. The fiberglass-lined shower is divided from the head by a stainless steel and glass door, and the ceramic basin is set in a granite-topped counter with designer faucets. Access to the crew’s quarters and the engine room are from the port side deck, immediately aft of the aft side-roof support, via an access door and stairs, which lead down to the aft lobby. This location allows the crew to come and go from their quarters and the engine room without disturbing the guests enjoying the amenities of the California deck.

The Fleming 78 has a completely improved engine room and machinery space layout, which has made good use of the available extra space. The cabin sole of the machinery room is double thickness and filled with lead/foam sound insulation to isolate the accommodations from the area and is accessed through a hatch in the forward lobby.

The full height engine room in the Fleming 78 is spacious, brightly lit and laid out with easy access to all equipment. There are even lights illuminating the drip pans under the engines. Stainless steel overhead handrails run the full length of the engine room. The engine room is lined with a reflective alloy pegboard for easy maintenance and the access door is an internally insulated, submarine type with gasket, double latch and inspection window.

Naturally the main engines are the most prominent items of equipment in the engine room. The standard engines for the F78 are Man V12-1550, but 78-001 has the new model MAN V8-1000’s. Standard generators are two 32 KW Onan units in sound shields. Variable displacement pumps on both engines power the American Bow Thruster centralized hydraulic system, thus maintaining stabilizing and bow thruster operations even when running on one engine.

The spacious Fleming 78 pilothouse has the feel of a bridge of a much larger vessel and is the nerve and social center of the boat. Gently curving stairs lead down to the accommodations and short companionways lead up to the flybridge and down to the saloon. Sliding doors on either side give access to port and starboard bridge decks.

An L-shaped settee, raised up for enhanced visibility, is set around a teak table with storage built into the leg. An optional, hydraulically operated pilot-berth can be recessed into the aft bulkhead. There is space for a full range of electronics in full-width upper and lower consoles. Adjacent to the pilothouse is a day head with toilet and ceramic basin set in granite countertop with mirror and lockers.