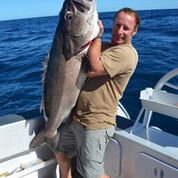 Most anglers know that if you want to catch hapuka then you need to go wide and fish in deep water. But there are also several other things that will help improve the odds to help you hook up on a big puka. Called hapuka in the north and groper in the south, they used to be found quite close to the shore in as little as 10m of water all around New Zealand, but constant fishing pressure has meant they are now more commonly caught in deeper water (60m+). They are usually found living in reefs, cracks or caves where good structure provides suitable habitat.

They are voracious predators, feeding on a large range of other fish species and crustaceans including; red and blue cod, hoki, crabs and crayfish. Similar to bass but more easily recognised, hapuka are grey-brown in colour with silver- white underbellies. They have 10 dorsal spines running along their back. Look for a rounded anal fin and rounded pectoral fins with a large, square-shaped tail. Their lower jaw protrudes from the top. Hapuka are a slow growing, long-lived species, reaching sexual maturity between 10 and 13 years and they can live up to 60 years. They can grow as large as 100kg, but are typically around the 25kg mark. They have an average size of between 80–100cm, but can reach up to 180cm in length. The New Zealand all tackle record is 68kg and this is a very large puka that probably won’t be beaten anytime soon.

Using braid is essential in such deep water as braided line doesn’t stretch like monofilament and you need to detect the bites with such a lot of line out. I use 24kg braid with a two hook dropper rig with sinkers between 15oz – 30oz, depending on the current and drift rate.Make sure you tie the sinker to your heavier dropper rig with lighter mono to ensure it will break off easily if you get snagged in the structure. You want to at least get your hooks and leader back. Look for reputable pre-tied dropper rigs in your local tackle store with circle or recurve hooks such as Gamakatsu or Mustad brands. 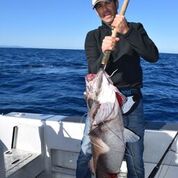 Large 30 –50 sized reels that will hold at least 300m of braid is the minimum reel that should be employed for the job. They need to be strong and handle the weight of large fish and heavy tackle. A matching 24-37kg rod with a roller guide tip is also ideal for this style of fishing. Lumo sticks are useful and attach these near your hooks to help attract attention down in the deep. 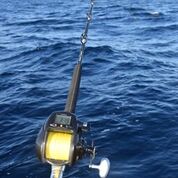 Fresh bait is best, on several trips the biggest fish and the angler with the most success was using fresh bait. I believe that down deep in almost pitch black conditions, scent is your best way to entice a hapuka to bite. So it makes sense that using juicy and oily fresh baits will be better over old, frozen baits. Jack mackerel, cod, barracouta or kahawai caught that day are top baits to use. Fresh restaurant quality squid, bought the day before from a fish market has produced for me too.

Firstly, you need to locate a suitable reef or mark in deep water that is likely to hold fish. Typically fishing from 100m-400m is where I have caught hapuka, although I did catch a small 4kg pup in only 30m when snapper fishing at The Mokes. The skipper needs to allow for the drift of the boat and to reverse when required to keep the baits vertical when dropping. It can take several minutes to reach the bottom in such deep water, so you don’t want to miss the mark. 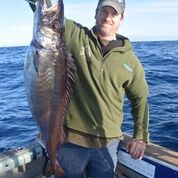 Its best to have the baits hit the bottom just before the structure and then you wind up several winds just off the bottom and drift over it. Most times if you get the drift correct, you will get bites and load up as soon as it hits the bottom.Drift over the marks a couple of times with your baits and if you have no success, move onto your next spot and try there. 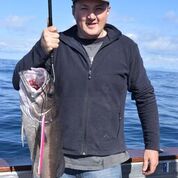 Many anglers scoff when they hear about electric reels, but I would argue they are the best piece of gear to use when puka fishing. Winding up all day from 300m+ takes its’ toll and I have done my tough apprenticeship doing it over the years. Using electric reels is still a lot of fun and you will still need the skipper’s boat skills to put you onto the fish. Shimano and Daiwa make the best electric reels and I have used them both.

Most of the rods are also bent butt and you leave them in the rod holder when fishing.Having the line counter is also beneficial as you watch the line read out on the drop. I would highly recommend investing in an electric reel if you intend on fishing a lot in deeper water for puka, bluenose and bass. Jigging for hapuka is also very effective. You do need to alter your style over the faster mechanical jig retrieve for kingfish. Use a slow-high-lift off the bottom, keeping in touch with the jig by winding on the drop and keep dropping the jig back to the bottom after a few lifts. I would recommend using lumo jigs for this to help attract bites or even small lumo sticks pushed up into the rubber sleeve on the assist hook.

Hapuka is simply one of the best! Pan fried in panko crumbs with fresh tartare sauce and lemon, it’s hard to beat. The other great benefit of targeting hapuka is you will also
encounter a few other deep water species that are just as good to eat – bluenose, bass and gemfish (excellent smoked). 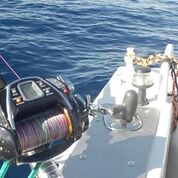 There is no size limit on hapuka, this is because they will most likely not survive being returned from living at such great depths.

Setting your boat up for game fishing