What is an EPIRB

EPIRB stands for Emergency Position Indicating Radio Beacon. An EPIRB is meant to help rescuers locate you in an emergency situation, and these radios have saved many lives both at sea and on the land since their creation in the 1970s. 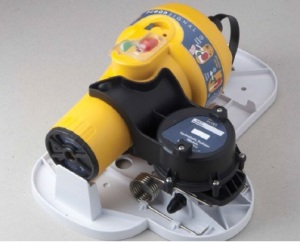 Once activated, both of the radios start transmitting. Approximately 39,000 km up in space, a GOES weather satellite in a geosynchronous orbit can detect the 406-MHz signal. Embedded in the signal is a unique serial number, and, if the unit is equipped with a GPS receiver, the exact location of the radio is conveyed in the signal, as well. If the EPIRB is properly registered, the serial number lets the Rescue Coordination Centre know who owns the EPIRB. Rescuers in planes or boats can home in on the EPIRB using the 406-MHz signal.

Older EPIRBs did not contain a GPS receiver, so the GOES satellite received only a serial number. To locate the EPIRB, another set of satellites (like the TIROS-N satellite) orbiting the planet in a low polar orbit could pick up the signal as it passed overhead. This would give a rough fix on the location, but it could take several hours for a satellite to come into range.

As of February 1, 2009, satellite processing of distress signals from the older 121.5 and 243 MHz emergency beacons was terminated worldwide due to unreliability and false alarms. When a 406 MHz beacon signal is received, search and rescue personnel can retrieve information from the registration database. This includes the beacon owner’s contact information, emergency contact information and details regarding the specific trip plan and any medical conditions of the owner or members in the party. Having this information allows the Coast Guard, or other rescue personnel, to respond appropriately.

EPIRBs use COSPAS-SARSAT an international,humanitarian satellite-based search and rescue system. SARSAT is an acronym for Search and Rescue Satellite-Aided Tracking, and COSPAS is an acronym for the Russian words “Cosmicheskaya Sistyema Poiska Avariynich Sudov,” which mean “Space System for the Search of Vessels in Distress,” indicative of the maritime origins of this distress alerting system. The system, which operates 24 hours a day, 365 days a year, detects and locates transmissions from emergency beacons carried by ships, aircraft, and individuals. Cospas-Sarsat is maintained and operated by governments all over the world; thus there is no subscription fee required for owning a 406 MHz EPIRB, ELT or Personal Locator Beacon.

There are many different types of batteries containing lithium of varying quantities and composition. Lithium batteries prove valuable in marine applications because while lithium battery packs are considerably more expensive than standard packs, they hold up to three times the capacity of alkaline packs. Lithium battery packs are designed to work well across a wide temperature range, even at sub-zero temperatures while still maintaining a long in storage life.

Regulations require manufacturers of EPIRBs to calculate the expected life of a lithium battery and then half it to arrive at the date the battery should be changed, to allow a buffer of battery life at that date. It would not be fun if your battery said expiry date 20/8/2014 and went flat the following day! 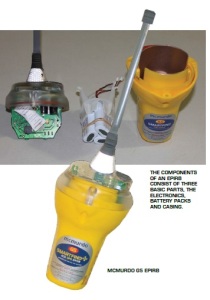 SOLAS certified EPIRBs must comply with IMO Shore Based Maintenance rules that require a full workshop safety check every five years, it’s recommended that the battery is changed then even if it still has some battery expiry life remaining. I have had many an EPIRB come to me for a new battery with an expiry date that is for 5 or 6 years ago, these EPIRBs will often still self test perfectly. However, the battery must still be replaced because aging effects will have reduced the remaining transmission run time left for use in an emergency situation. No one wants the EPIRB to stop working before the rescue is done so being strict about the battery change interval is a potential life saver.

Older models may have battery configurations that use large sized Lithium batteries that also have a much higher Lithium content than more modern designs. These will likely be classified in transportation as dangerous goods (hazard) and can be very expensive to re battery as the batteries are very costly to produce and to move around in transportation. It is recommended that, after 10 to 12 years in the marine environment, the beacon should be replaced, for instance at the end of the first battery change cycle after 10 or so years in service.

Contact your supplier or a distributor for relevant information and discuss your future needs including disposal of the old unit if applicable. The moral of the story is, keep an eye on your EPIRBs battery expiry date but don’t panic if it is over time. 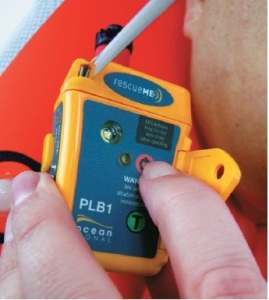 Shipment of Lithium batteries and items containing them are subject to dangerous goods regulations in transportation. This is because they can potentially become a hazard if accidently damaged to the extent of battery short circuit giving off extreme heating effects (fire safety hazard). When shipped as air cargo, any package with lithium batteries inside is required as a minimum to have a Lithium battery warning label on the outside of the package. And dependant on the size and quantity of the lithium batteries, may also be subject to further packing control measures before being accepted for air transportation. So before just consigning your EPIRB or PLB to the safe keeping of any postal services its a good idea to check with them first.

Why you should register your beacon

It’s FREE and easy to do – Registration of your 406 beacon is free and only takes a couple of minutes. Just visit www. beacons.org.nz/register and follow the easy to understand instructions. Registration forms can be submitted online, emailed or downloaded and sent through the post.

When you activate a 406MHz beacon, it is quickly identified by satellite, which then alerts RCCNZ. If registered, the identification code in your beacon can be searched in the database, so RCCNZ knows who you are, who your emergency contacts are and what type of vessel, aircraft or vehicle you are in, or if you are tramping, hunting or diving.

RCCNZ may also be able to find out exactly who is with you and how long you have been gone, and whether anyone has any medical conditions, so rescuers can be in the best position to help you when you are located. To register your beacon, Ph: 0508 406 111, E:[email protected] govt.nz or visit the beacons website www.beacons.org.nz.

How to dispose of old beacons?

Old or obsolete beacons need to be disposed of carefully, to ensure they are not set off by accident. Do not just throw them away, as much time and money has been spent on search operations to dig beacons out of rubbish tips.

The battery needs to be disconnected and the beacon disposed of according to local regulations, as many beacons contain hazardous materials. The names of distributors who dispose of old beacons can be found at www.beacons.org.nz.

FISHING FROM A PWC

BE CAREFUL WHAT YOU DREAM