High Speed to the Moks

Over 30 years ago Barry Thompson joined Dave Donaldson for a fishing trip to the Mokohinau Islands, so when the chance came to do it again, he didn’t hesitate.

The Mokohinau Islands are a small group of islands that lie off the northeast coast of New Zealand’s North Island. The islands are 54nm northeast of Auckland, 11.4nm northwest of Great Barrier Island and approximately 27nm from Leigh or Mangawhai. No matter which way you go there, it’s a bit of a journey and one that most of us who spend the majority of our boating time in a small trailer boat, never do.

So, when Dave Donaldson rang me and said he wanted to go fishing at the Moks and would I like to join him, I didn’t hesitate. Plus when he added that he wanted to go there and back in a day, plus venture out 20nm past the Moks to drop some baits 170m down for Hapuka, I was even more enthusiastic. As I didn’t have any Hapuka gear, I rang Composite Development’s MD, Marty Johanson importer of top fishing tackle brands such as Okuma to come along and bring the right gear. Fishing in 170m requires specialist equipment and as I expected Marty had it all.

To be fair, this wasn’t the first time I had been to the Moks with Dave. In early 1983 Dave and I took his twin Mercury 225 outboard powered 7m alloy cat, Woolywool Enterpriser for a fishing trip to Great Barrier and the Mokohinau Islands. While the weather cut up a bit going over and we negotiated the final hour in the dark, it took a lot longer than expected 2.5 hours. After staying the night at Fitzroy Lodge and been woken up in the morning to the screaming sounds from a muster of  Peacocks, we set course for a day at the Mokohinau’s.

This was my first ever visit to the islands, where Dave, well known Mercury mechanic, Bob Menzies and Dave’s son Craig went for a dive. While they were underwater hunting crays, I spent the time casting a lure into an ‘acre’ of Trevally mouthing on the surface. No trouble catching plenty and then a signal from Dave to come and get them, meant I had to stop right when I was hooked into a big Trev. I thought they did seem a bit anxious as I cruised towards them and when I saw two huge fins between the three divers and me, I realised why. Needless to say, it was a quick recovery, before cruising across to Flax Island for a lunch break in a sheltered bay inside Arch Rock.

I have recounted many times the story of what happened next. Anchored in about 3m of crystal clear water, on a mirror smooth surface and with a cloudless sky overhead I dropped a line over before grabbing lunch and a coldie. Well, the second part never happened as my reel screamed and it was all on.

The others saw my excitement and quickly joined in. We could see a large school of snapper on the sand below, and as soon as we dropped a bait, we had a fish. All the fish were of a reasonable size, some went over 5kgs but most were around 2.3 kgs. After a couple of hours we had 40 snapper aboard and were very proud of our efforts.  But we were outdone, when our spearo Bob came back with two snapper over 6.8kgs and the story of having lost one that went easily over 9 kgs. Sort of put our catch to shame.

As there was no limit in those days, we kept everything and back at Fitzroy that evening we spend a couple of hours filleting. One of the most productive fishing trips I have ever had. The next day we went around to The Needles and Rakitu Island where Bob managed to spear an 18 kg kingie and we caught another one around the same size on a bait.

After refueliing at Fitzroy Wharf we headed back to Arkles Bay, which in a 1-2m sea we covered in 58 mins.

This time around the boat Dave had to take us to the islands was his 54ft, designed foiling powercat, T2, a beast of a machine that runs to almost 46 knots and is the current holder of the PowerBoat Magazine Diesel Speed Record at 45.6 knots.

T2 started life as Tornado a high-speed tourist boat for the Bay of Islands. Nic de Waal designed it for Rex Sellers in 1997, and Duthie Lidgard built it in a shed in West Harbour marina. The name Tornado off course comes from Rex’s Olympic medal in the Tornado class.

Rex operated the boat as high-speed adrenalin trip from the ferry terminal out to Rangitoto, all around Waiheke, and back. It was the days before speed restrictions in the harbour. He later operated it in Bay of Islands to Hole in the Rock.

Top speed during sea trials was 55 kn, but Rex used to “cruise” around 45 kn with 50 pax on board. It has a foil machined from a solid aluminium billet. Tornado was, in fact, the very first boat de Waal designed in NZ.

The plan was for Dave and his crew of family and friends to pick me, business partner Doug Dukeson and Marty up at Gulf Harbour. The weather played into our hands all day with a 5-10 knot breeze and flat seas with a gentle swell. The sort of water that foiling power cats love. The ride to the Moks was silky smooth, and we covered the 66nm to our Hapuka spot in around two hours. We had been running at 33 knots most of the way, with the pair of Scania DSI14 69M engines purring at 2050 rpm. The DSI14 69M engines, (later the model code was amended to DI14 69M), are V8, 14.2 litre, turbocharged and intercooled, four stroke, with direct injection that produce 750 hp @ 2,200 rpm. Despite being “old timers” in the diesel engine world – by today’s standards anyway, they still run super smooth and quiet in T2.

It must have been an impressive sight for anyone who saw T2 fly by, with the Seafury surface drives pushing vast amounts of glistening rooster tail into the skyline behind the boat.

Unfortunately, our Hapuka fishing didn’t go well as we were forever moving off the small pinnacles that according to the sounder were holding big fish. Despite Marty’s best efforts with his top of the line Makaira 50 reel with 80lb line and 130lb braid, the big strikes never came. After an hour we decided to give the Hapuka a miss and went back 20nm to fish for snapper at Maori Rock, off the northern end of Fanal Island at the Moks.

The snapper was prolific, and while there was nothing big, we got plenty of pannies to feed everyone. Plus we had the bonus of Trevally mouthing all around us, and some made it aboard the boat.

BACK TO ARCH ROCK

We anchored up in almost the same spot Dave and I had fished over three decades ago and while I never expected to emulate what we did then, I thought it would be fitting to bring a few snapper aboard for old times sake. Dave’s son Craig, grandson Hugo and friend Mark all went off for a cray dive, which like the Hapuka didn’t prove productive. I did manage to bring aboard a few small snapper but nothing worth keeping.

After stowing all the diving and fishing gear away, we went for a leisurely cruise around the outside of Flax Island and attempted to run through a narrow gap on our way to Burgess Island. However, we bailed after seeing too many rocks ahead as it was low tide and unpassable in T2. We checked out the bay under the lighthouse which was operational from 1883 to 1980 as is rumoured to be the birthplace of well-known Auckland fisherman and restauranteur, Ginger Gibbs. At precisely 3.45 pm Dave got T2 on to the plane and again sitting on 2050 rpm we set a course to Gulf Harbour. Right at 5.00 pm we entered the marina. 1hr 15 mins to cover 33nm!

After unloading three of us and all our gear at Gulf Harbour, T2 headed back to Westhaven. For Dave and his team, it had been a 172.5nm round trip, and it was all done in a day. We had set out to show that if you have the right boat and the right weather, the Mokohinau Islands are a day trip from Auckland. Would I attempt that in my 4.8m McLay….no way! But I can’t wait to go again, especially in the comfort and speed of T2 and maybe this time with some Hapuka and crays to bring home. 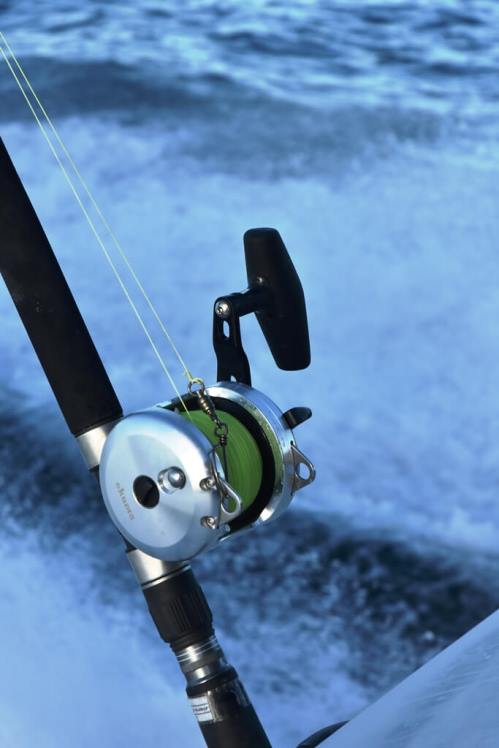