That this new, slightly larger boat closely follows the theme established by the 380 should be no surprise perhaps because the Integrity 380 Sedan is quite a success story. Widely acclaimed, it continues to sell very well indeed and will of course continue alongside its younger sibling. 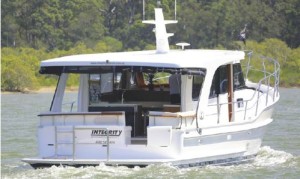 In fact, the most profound change in the 440 Sedan has probably gone unnoticed. This would be the raising of the deck level to increase headroom “downstairs” in the two staterooms and the bathroom. Surprisingly, the 440’s overall height hasn’t increased significantly– which is an important point for people based somewhere like the Gold Coast where bridge clearance can certainly be an issue for some.

Put the two side by side and the 440’s proportionally smaller superstructure windows do catch the eye but overall the height and size differences are largely absorbed in the mind’s eye.

Downstairs, the increased ceiling height’s effect is more profound in precisely the same way I suppose that any dwelling with higher ceilings LOOKS so much bigger. Some of the increased space is obvious though. The portside VIP stateroom is almost twice as big as the 380’s! It now has a full size double berth with ample space along one side and across the foot end. 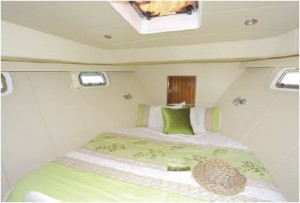 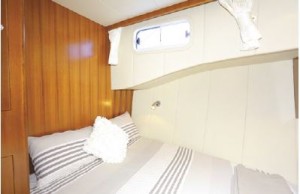 Although the bow stateroom is quite a bit more spacious, with space down each side of the bed (again typical of bow berths,) you do have to climb up into it and it’s entirely possible I should imagine that some owners will opt for the more conveniently shaped VIP suite and leave the bow stateroom for guests.

Downstairs, the central companionway is set slightly to starboard, with the bathroom doorway opposite the starboard stateroom door. The bathroom is shared between the staterooms and is again more spacious than the 380’s, so much so that the shower cubicle and vanity area would do some domestic ensuites proud.

I especially liked the roomy shower cubicle separated from the toilet and vanity with a glass door. No wet toilet seats after showering in this boat!

Like the 380 Sedan, the new 440 is still basically set up for two couples to cruise in comfort for a few days to a week or more at a time. For shorter voyages though, there are another two convertible double berths, the saloon dinette, and another in the cockpit, making a total of four separate private (with a strategically placed curtain here and there,) berths, for short term cruising at least. A full set of camper covers to weather (and insect) proof the cockpit, and to make the aftmost convertible berth user friendly, were in place on the boat reviewed. These are part of an introductory package offered by Integrity Motor Yachts Australia which also includes the teak table necessary to make the cockpit settee more of a patio dinette.

This $A620,000 package is an attractive one. It also includes a 4.7kW reverse cycle air conditioning system for climate control throughout the saloon and downstairs accommodation. If natural ventilation is preferable, the bow stateroom has a large rooftop hatch and four porthole style windows, all of which are fully insect screened; as are portholes in the portside stateroom.

One thing consistent between the 380 and 440 Sedan is the cleverly designed aft bulkhead in the saloon. This has two hopper “windows” and a sliding lower door which can be configured in various ways including separating the cockpit and saloon completely when closed up tight, and integrating them into a single open floor plan when fully open. 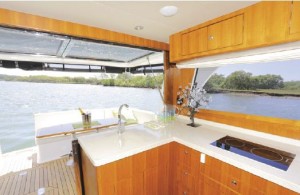 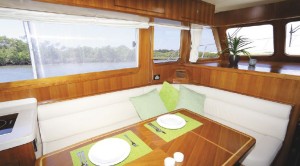 The saloon itself however has been rearranged. The galley has moved portside and is now an “L” shape aft of a lounge dinette formed into a similar, equal sided “L”. Moving the galley though hasn’t changed the way the bench top can be a servery through to the cockpit. Well, with the fitted covers over the sink in place it can, anyway.

The helm station remains to starboard with a very conveniently located electrical control panel below the helm seat and, in the boat reviewed, wall space along the starboard side back to a fridge against the aft saloon bulkhead filled with kitchen cupboards. Alternatively the cupboard can be replaced with a settee lounge.

In either case, a considerable amount of additional cupboard space in the saloon is afforded by overhead lockers, some of which are fitted with dish and cup racks. Domestic appliances in the galley include a twin-ring ceramic-topped electric cooktop and a microwave oven, twin stainless steel sinks with a single mixer tap, a trash bin, and an exhaust fan. A teak and holly sole throughout the galley and saloon, Corian counter tops, and an Onan 7kVA genset to run the electricals and air con are also included in the deal.

As I said before, it’s an attractive package. For your $A620,000 it also includes 4hp thrusters units bow and stern, an LCD TV and a DVD player, a freshwater deck wash system and a transom shower, teak decks in the cockpit and on the stern’s swim deck, a VHF radio, a Fusion sound system and an integrated Apple iPad navigation system, plus a Raymarine electronics package, including an autopilot and chartplotter. 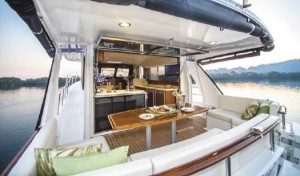 One thing I liked about the 380 Sedan that hasn’t changed is the way the hardtop extends aft over the cockpit and out to each side of the boat, covering the side decks. This quite effectively shelters the cockpit, and will keep a lot of rain and dew off the cabin windows. Also, it gives appreciably more protection from the sun – something that’s very important for those of us who have had too much sun already! The hardtop also extends forward far enough to shade the windscreen, working just like a cap to shade the view at the helm from sun and glare.

Like the 380 too, there’s 360 degree access around the 440’s periphery. The side decks are wide and easy to walk along securely, with a high rail beside you right up to the foredeck. A large sliding door beside the helm station means the helmsman can move easily from the helm onto a dock or pontoon whilst mooring.

Integrity makes no bones about the Sedan models’ suitability for serious cruising and this has only been extended by the new 440 Sedan. 380 owners have enjoyed some enviable trips including Bass Strait crossings, extended periods in the wonderful Whitsundays, and traverses of Australia’s east coast to the northernmost extent of the Great Barrier Reef.

For long range cruising, the extra space available atop the 440’s hardtop should come in handy then. There’s ample space for a sizeable solar array and you could definitely fit bulky but not weighty toys such as windsurfers or kayaks up there, too.

Regrettably, this review was restricted to the familiar waters of southern Moreton Bay. Oh how I’d like to tow my fishing dinghy around there using an Integrity 440 Sedan as a mother ship!!!

Integrity Motor Yachts Australia staff told me they expect a laden 440 Sedan to displace around 15 tonnes. The extra
weight, length and beam should only enhance the new 440 Sedan’s abilities at sea. In the confines of places like southern
Moreton Bay, it’s reassuring that Integrity’s displacement hull features a full-length keel forming a straight line from forefoot to stern. Both the rudder and propeller are situated above the keel line where they’re somewhat protected from any accidental contact with the bottom – a not uncommon occurrence in places like southern Moreton Bay.

The Integrity 440 Sedan is powered by the same John Deere 6068TFM diesel engine as the 380 Sedan. This is a 6.8-litre 6-cylinder engine producing 225hp. Complete data sets for the 440 Sedan were a work in progress when I reviewed the boat prior to its official release, but it’s reasonable to expect similar performance and fuel efficiency to a 380 powered with the same engine.

For the long term, the 6068TFM is freshwater cooled via a heat exchanger to separate the engine from the harsh saltwater environment. It’s an engine perhaps more commonly used in commercial vessels where its life expectancy of 30,000 odd hours is pretty encouraging for usage here. That’d be a staggering amount of hours for recreational use.

The 6068TFM has a whopping 780Nm of torque at 1800 rpm. It’s a pretty much under-stressed application here for an engine that’s taking over where the traditional Lister and Gardner units left off.

While we photographed it, the Integrity 440 Sedan was lazing along at 8-8 ½ knots where it seemed to find a comfortable slot much the same as the 380 Sedan I reviewed did. How fast it will actually go flat out at WOT has yet to be determined. Although no-one seemed in a hurry to do so because flat out is hardly the Integrity 440 Sedan’s style. Expectations of a top speed around 11 knots seem reasonable.

Indications are that cruising in the 8-8 ½ knot slot will provide a comfortable cruising range of around 600 nautical
miles from the 1500-litre standard fuel tank. The water tank holds 950 litres and the holding tank 115 litres. Like the 380, relaxed, comfortable cruising is quite the Integrity 440 Sedan’s style.

It’d be ridiculous to state that the new 440 Sedan is a better boat than the 380 – which I must say I love – to think of it as everything the (acclaimed and highly successful) 380 Sedan is, plus some worthwhile additions, would summarise it very well I think.