Most of us go fishing when we can get the time off; but when are the best times for fishing? and how much influence does the weather have on our success or failure? Weather guru Ken Ring offers some advice on understanding how a successful day on the water is open to more than just having the right bait.

Also fishing can be good during the “morning rise” (after sunup for a spell) and the “evening rise” (just before sundown and the hour or so after).

When the barometer is steady or on the rise is also ideal, as even during stormy periods, the fish aren’t going to give up feeding. The smart fisherman will find just the right bait. When the breeze is from a westerly quarter rather than from the north or east is also favoured.

Fishing with the Moon

There are no perfect fishing spots. Good fishing depends on timing. The timing depends on the Moon. It has less to do with tide times, and more to do with the Moon’s position and phase. The Moon exerts a gravitational pull on the land and the daily water tide is where water levels end up when the land expands and contracts. The land tide therefore controls the sea tide. 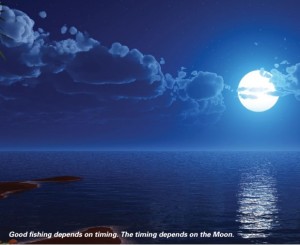 The Moon affects currents and together with tide times currents become sea surface currents which influence sea surface temperatures. These feed sea surface winds and become air pressure zones. As currents influence wind, so the wind affects weather. The Moon’s closeness speeds the currents and exaggerates all the tides; in the air, sea and land. It is why storms arrive at kingtide times.

The Moon moves between latitudes returning to the same position every 27.3 days. This is called the declination cycle. What latitude the Moon is at between its northern and southern hemisphere peaks, influences the levels fish tend to feed at, be it bottom feeding, mid ocean or surface feeding.

When the moon is approaching southern declination, in the southern hemisphere currents ascend in the ocean, and fishing is better near the surface, so trolling and net fishing are favoured. Approaching northern declination it is better to chase bottom feeders and the deeper species. Currents move faster when the moon is crossing the equator, akin to the midpoint of a pendulum. Smaller fish travel in the safety of schools on the faster currents, and their predators are more numerous at those times.

Fish are territorial. Small creatures work against tidal fluctuations in their environments in order to stay where they are familiar, and this makes them use energy. This energy must be replenished by food. It is why feeding times follow the orbits of the Moon. When the Moon is full or new, there is more water coming in and tides are higher, it means faster flows and more energy expended, more crud is floating around and churned out, which brings the curious small creatures out to investigate.

New moons in summer bring a different pattern to new moons in winter. The waters are warmer around summer full moons and cooler around winter new moons. Waters are cooler but new moon currents are stronger. On the way to the fishing grounds, check to see that animals are eating. If cows are pulling grass, if dogs and cats are foraging, if birds are diving into the sea, chances are that the fish will be biting also.

The Maori Fishing Calendar is essentially the same all over the world. A careful examination of the Canadian Rockies Hunting Calendar, the traditional calendars in coastal Asian, Eastern and African hunting and fishing-based cultures, and Australian Aboriginal folklore will show the same principles, adapted for each different set of geographical circumstances.

It seems that the world over, humans have noticed that out in the wild, the Moon controls best food-gathering times. We can all fish around in the kitchen cupboard for a tin of sardines. But to get the real thing, fresh, you might want to check out some basics.

Times of the Month for Fishing 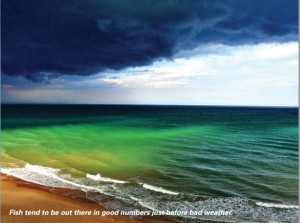 Fish bite best around full and new moons, and bite well but to a slightly lesser degree around the first and last quarter phases. For best results, allow a day or so on either side of, and including these phase positions. Also fish tend to be out there in good numbers just before bad weather. Then there’s perigee, when the Moon is closest to earth in about 27 days, and apogee when Moon is furthest away.

Fish either side of both perigee and apogee. Be mindful of these days for coastal fishing, because over perigee (moon closest for month and time of most swell turbulance) the fish won’t come in close. They may have fear of getting sand in their gills due to the action of the bigger waves. Perigees send fish into deeper waters out at sea, so if fishing from a boat try longer traces over perigee. Apogee can bring extreme calm or turbulence because the Moon is being acted on the most by earth’s gravity instead of the Moon as in perigee.

Times of the Day

The mid-moon is the best, when the Moon is in the sky over north or directly underfoot on the opposite side of the earth. The second best time is when the Moon is on the horizon either at moonrise or moonset. These positions slowly advance by approx 48 minutes each day. To find out these times, consult your local newspaper for Moon Rise/ Set positions.

Best Fishing Times of the Year

Some fish come in to spawn in particular months, for instance the kahawai in February on the North Is. East Coast, which go up the warmer waters of the river outlets to lay their eggs. After that they get into a feeding frenzy and the sea can boil with kahawai at that time. Most coastal and inland fish have a season, for instance whitebait. Of course one should be there at that time. You would not go hunting rabbits if there were none around. However, most fish in deep water are there throughout the year. Larger fish like marlin have an approx 19-year periodicity, due to the cycle of water temperatures. 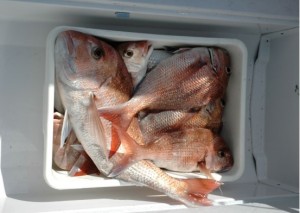 Weather plays a big part. Those who live or spend recreational time outside know that after a while, with a sixth sense about changes either imminent or happening in the environment, just as a mechanic does when listening to an engine. Familiarity breeds intuition.

Everything in nature is in some sort of intercommunication and operates in a series of waves which we recognise as rhythms. People have known for thousands of years that these are controlled for the most part by the Moon, which raises or lowers flexible fluids; water, air and land. Most creatures are largely made up of water and have internal tides. What controls weather and tides also controls us. Weather is as much tied to the Moon as are feeding cycles, energy cycles, and other agricultural factors like ground saturation.

The calendar we produce here was called the Maori Fishing Calendar when the early settlers encountered it, but it is universal. The Canadian Rockies Hunting Calendar will be found to be almost the same. At one time this was a globally shared culture and so it works for almost anywhere in the world. In NZ we still call it the Maori Fishing Calendar because it was preserved in its original form from whence it was brought here, either from Asia or the Middle East.

For many years around NZ fishing guru Bill Hohepa did a splendid job of popularising the concept which for many fishing families had been handed down as a set of principles. My own tutor was the late Herbie Careen, an elderly farming relative who fished almost every day of his life from his farm at Tutekehua on the upper reaches of the Hokianga River. It was always a joy to go fishing with this walking encyclopedia. Herbie also knew 1000 different ways of cooking mullet! 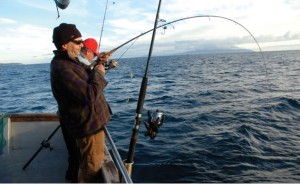 The Calendar, also called the solunar calendar has been worked out averagely true to the Moon’s midmoon movement from day to day between latitudes 45N and 45S, where most of the world’s population lives. But, the reader may ask, how can that be, after all, the weather isn’t the same for all places. But the whole earth revolves under the Moon once every 24 hours. That means that whatever phase the Moon is in is going to apply everywhere.

For example, it so happens that on the night of the Full moon, at exactly midnight the Moon is sitting above due north if you are in the southern hemisphere, and over due south if you are in the northern hemisphere. This is the midmoon on that particular night and that fact was once used as a directional night compass for travellers. If you knew the time and the date you could find north and south from it. Obviously then, every other Moon phase is experienced the same way all over the world also. Some commercial solunar tables will have you believe you need a different fishing table for each location. This is incorrect, except for the need for an occasional 12-hour adjustment for moon phase don’t let anyone sell you a “localised” one.