The owners of Luminaire were initially looking for a very serious fishing boat around 14.3 m., but after consultation with both the builders and designer, the project grew to 18m to accommodate all the owner’s particular requirements. The end result is a highly spec’d, high-end monohull of outstanding quality.

“When I first spoke to the owner he was after a basic fishing machine, but his wife was also looking for a more luxurious boat for entertaining, so we had to blend the two together and it sort of grew from there”, says designer Scott Robson. “This is a true sports fisher with the back end for fishing and the interior for comfortable living and entertaining”, adds Robson.

Luminaire is very much an owner-driven custom boat, with a layout that is quite different to what I have seen on previous Robson-designed monohulls and powercats.

One of the other requests by the owners was they wanted square and angular fittings throughout the boat, from the door handles to the tapware. This also carried though to all the joinery with a firm solid edge look on all the loungers, tables and seating.

The form is very modern, without going too much into a radical modernistic style as is now found on many of the European, and more especially French, production boats. Luminaire’s minimalistic design offers a pleasing-to-the-eye compromise between style and practicality. 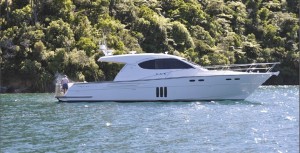 The hull is based on the well proven Cerveza, a Robson R50 built a few years ago for a serious sports fisherman. The deep vee hull has a transition-planing surface with a fine forward entry. It’s an extremely forgiving hull either punching into the sea, or in a steep following sea, is dry and stable at rest. Like all Robson designed hulls I have ever been involved with, its ability in handling moderate to rough water is exceptional.

Construction of Luminaire is an alloy hull and decks to the pillars with a composite hardtop, boarding platform and rear decks, all to survey standards. Built off a temporary mould, the finish is outstanding and a credit to the workmanship of the builders. All-up displacement is 23,500kg. 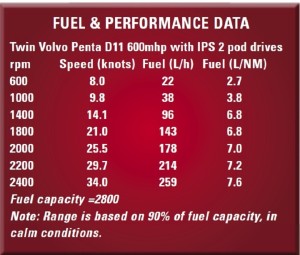 Power is twin Volvo Penta IPS2 600, which gives a top speed of 35 knots. If pods are not to your liking then the R545 is also available with conventional shaft drives.

Being a custom boat, the layout is very much owner driven and in the case of Luminaire one of the first requests by the owners was for a full-beam master, two guest cabins and two ensuites. While very much atypical of boats of this size, it is always a challenge for the designers to get everything to fit as required. In the case of Luminaire, Robson has done a great job of making all the cabins and ensuites as large as practicable. 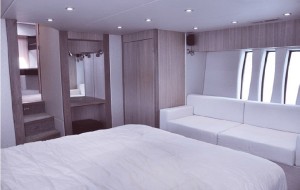 The full-beam master has the advantage of the IPS drive system allowing for the rear bulkhead shifted over a metre further aft than if powered by conventional shafts. The space has been well utilised, with a full-size queen bed, washer dryer in its own cabinet, and a full-length settee along the starboard side just aft of a very large two-door hanging locker. Entertainment is provided with a flat screen TV, plus there is a handy vanity unit with stool on the forward bulkhead.

Either side of the bed are nightstands with drawers and there are plenty of other storage options throughout the master stateroom. A nice touch are the triple vertical hull side laminated toughened glass ports either side which let in plenty of natural light and have become a signature for Icon Custom Boats.

All the timber throughout the accommodation areas and in fact the entire boat is solid French oak timbers and veneers. Ultra fabric has been used on the main bulkheads and Ultraleather Palomino on the feature panels beside the beds, offering a light and relaxing appeal to the cabin spaces.

The owner’s en-suite is a little different, with the use of a fully tiled shower stall and an interesting mix of black and white tiles on the walls. The sole is finished with a black and white chequered flag pattern vinyl. Subtle and not overpowering, it again generates the modern mode that the owners wanted to see throughout the boat.

The large vanity with storage under is complete with a squared edge raised bowl and like the rest of the boat all tap wear is in the angular style.

Both the guest cabins share a similar but smaller ensuite that is fitted out very much the same as the owner’s ensuite. Both utilise a Jabsco head and walk-in shower with glass doors and angular door handles. I liked the fact that there is room to move in the showers and you don’t feel like you are pinned up in a corner as found on some boats.

The forward guest cabin is reasonably basic in design and layout with two full-length upper and lower berths, but again as this is a custom design the layout options are very flexible. There is storage under the starboard lower berth and in a forward hanging locker.

The second guest cabin to starboard is designed with single upper and lower bunk berths with a lower bedside cabinet, upper shelves and a hanging locker forward. Again a nice use of the space available.

To achieve the necessary height in the master cabin, it was necessary to raise the cabin sole of the saloon and hence the whole outward appearance of the R545 is of a high profile saloon. However, my first impressions of the boat were of a very balanced design with the right proportions, that delivers an attractive and somewhat aggressive look.

The saloon layout has U-berth seating to port with a reversing seat back, that permits your guests to sit facing forward whilst underway and then reverse it and have full U-shaped seating around the table for dining. 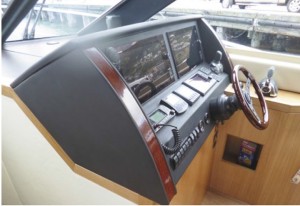 Navigator Ultraleather-covered dual helm seats to starboard face a very detailed and functional dash with full Furuno electronics, including a 14” glass bridge, Volvo smart gauges, autopilot, Icon VHF and auto anchor. Whilst there are no side opening windows, there is extra ventilation available via the large automatically operated overhead Webasto sunroof.

A nice feature is the port lights incorporated in the hardtop, offering both extra lighting and adding to the very stylish design. The aft bulkhead has another electrically operated drop-down window alongside the custom stainless sliding saloon door. This allows for a direct servery area between the galley and the cockpit. A Fusion 22” TV on a swing arm is mounted alongside so you can keep an eye on the latest game while waiting for the next fish to strike, or turn it around and watch a Masterchef episode while preparing the next meal in the galley.

There is no air con in the boat but the flow-through ventilation seems more than adequate. However, Luminaire does have a Hurricane diesel heating system that is vented throughout the boat, including the cabins – a great feature when the owners are cruising the Marlborough Sounds in the winter months.

The galley has been set up to cater for plenty of use, with a large U-shaped composite top and plenty of storage options above and below. Equipment includes a combination oven/microwave, induction cooktop and Bosch dishdrawer. Opposite is a full-size household fridge with freezer drawer and a pantry alongside the master AC/DC control panel.

As the first brief for Luminaire was for a serious fishing boat, it’s no surprise that the cockpit is totally focused around fishing. The owners love their line fishing and so there are all the necessary built-in bait tanks, cutting board, rod and tackle lockers and kill tanks. As they are not gamefishing types, there’s no chair or poles, although they could easily be added. The side coamings are flush and clutter free so you won’t get any lines caught on any exposed fittings.

The cockpit overhang is so high you’ve no chance of hitting it with a rod, but it does offer great protection from the weather. There’s a day head to starboard, which also doubles as rod stowage. Be for it fishing or socialising, the cockpit is orientated for both aspects. There’s seating for ten quite comfortably and space for at least the same number of fishermen.

Forward is an Isotherm icemaker, freezer and two-drawer fridge unit, a slide-out electric barbeque, a secondary helm as well as a couple of small settees. Four cockpit speakers help radiate the sounds from the Fusion system. For close quarter manoeuvring and docking, Luminaire has a Volvo joystick control unit either side of the cockpit.

The central transom island is multifunctional as a lounger, bait preparation area and dinghy stowage. There’s an aft table stowed away in the top of the dinghy locker at the rear of the bench seat and can be brought out when required, making this the ideal place to dine in a very relaxed atmosphere. The top is split between a soft cushion and a very serious bait station with twin sink units and large cutting board. Three live bait tanks are built into the full-width teak boarding platform, which is accessed via toughened glass doors either side of the central island. Stainless steel staples across the rear of the
platform can be removed for dinghy locker entry where there is also provision for a life raft and the tender’s outboard.

Luminaire is the largest monohull and in fact the biggest boat built by Icon Custom Boats and is certainly the most highly detailed. It is an outstanding example of the workmanship of the builders and the attention to detail that has gone into every facet of the boat, be it engineering or aesthetics. The blend of alloy and composite materials has been harmoniously achieved to create the right mix of alloy in the structural areas and the lightweight composite above the deck. There are also certain aspects of the design, layout and outward appearance of the Robson R545 that make it a standout example of Kiwi quality.