There were so many times when I was convinced that it couldn’t possibly get any more spellbinding, exhilarating or breathtaking. But then it did. Time and time again.

The memories, still fresh, form a kaleidoscope of captivating images. Like the countless times we found ourselves enveloped in swarms of impossibly coloured fish, or having a giant, active volcano materialise King Kong-like out of an impenetrable tropical mist. Then there was the dramatic and colourful welcoming ceremony on a stage perched precariously on spindly stilts over the mighty Sepik River, or the time we stumbled across a tiny, freshly born islet lapped by a sea of the most vibrant turquoise. There seemed no end to it, and for at least 10 magical days there wasn’t.

I have had the privilege of tasting adventure True North-style previously, when I experienced the Kimberley aboard the five-star luxury boat cruise a year ago. So I at least had some idea of what lay ahead when I flew into Madang, on the northern coast of Papua New Guinea. I knew that the days ahead would be filled with mouth-wateringly creative cuisine, an ever-helpful and cheerful crew and, most importantly, adventure on an industrial scale. 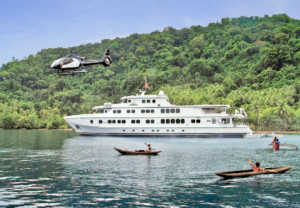 But nothing prepared me for the sights, sounds, scents and smiles that make up what the folks from North Star Luxury Boat Cruises call the Bismarck Bonanza. It is impossible to convey in detail all that makes up this rich, diverse and endlessly amazing voyage of discovery. Far better to try and conjure up verbal snapshots of the many encounters, both human and natural, that materialised throughout the cruise.

An indication of what lay ahead in terms of the relaxed approach to life of the inhabitants of the Bismarck Archipelago came as we touched down at Madang airport following the flight from Cairns. As we slowed along the runway, I glanced outside to see a teenager standing only a few metres away casually fishing in the adjacent waterway. He turned, smiled and waved before returning to the task at hand. I couldn’t help wondering how the airport authorities back home would react to an angler on the apron. Not too well I’d imagine …

Awaiting us at the nearby port was True North, and within minutes of our arrival lines were cast off, welcome drinks were dispensed and the bow was pointed north-west in search of adventure on the Bismarck Sea. For the remaining nine days, we would typically steam between destinations during the night, then drop anchor early in the morning and spend the day exploring local reefs and islands, or by being hosted with ‘sing sings’ by local villagers. 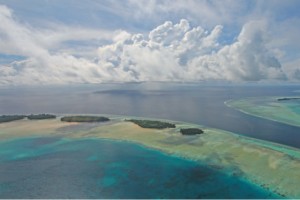 The plan was to head west to begin with, aiming for Bagabag Island and its explosive neighbour, the volcanic island of Karkar, before venturing up the Sepik River for two days of sightseeing and village visits. Then it was on to our western-most port of call, the Ninigo Islands for a day of fishing and diving indulgence. The Hermit Islands, including the small village on Luf Island, was next on the agenda before we dropped anchor off Ponam Island for the most colourful and energetic ‘sing sing’ welcome of our voyage.

Continuing east we took in Rambutyo Island, the large island of Manus and the sea-filled volcanic cone of Garove Island and then on to Baia on New Britain, where we explored the Pandi River. The port town of Kavieng on New Ireland completed our circumnavigation of the Bismarck Sea.

Fishing was an option on most days, while scuba divers explored the deep and snorkelers hovered in the shallows above. And hovering even further above was True North’s helicopter, piloted by the ebullient Rob Colbert. Passengers had the option of paying for a helicopter package prior to departure that included several flights throughout the cruise, or there was the option to choose flights on a daily basis and to pay accordingly.

The helicopter proved a popular option, allowing passengers to gain a broader perspective of the surrounding seas and islands each day. On most days we had the choice of fishing, snorkeling, visiting nearby islands or flying in the helicopter and the more energetic and adventurous passengers often managed to pack all activities into a single day.

But of all the enduring impressions that crowd my mind as I sift through the collected memories of my time in the Bismarck Archipelago, overwhelmingly I think of the people we met along the way. From one village to the next as we island-hopped each day, the people were generous and welcoming like none I have met before. Smiling, giggling children enchanted with their bright eyes and shy innocence, whilst adults unfailingly greeted us with warmth, curiousity and friendship.

Waving seemed like a second language everywhere we went, and within minutes of arriving at our daily destinations we were met by fleets of flimsy canoes bobbing precariously in our wake. Many times whole families, together with cats, dogs and even pet eagles, would venture out in primitive dugout canoes to greet us.

And everywhere we stopped we boosted the local economy, trading the PNG currency, kina, for fresh seafood, or visiting villages to shop
for souvenirs in small local markets. Traditional carvings and other artifacts, along with intricate shell necklaces, were popular items, many bargains finding their way into the True North hold each day.

Our onboard guide and Wewak resident, Hank proved invaluable during our village visits. Speaking several local languages, including the universal Pidgin, Hank was the link between two alien cultures; one ancient and traditional and the other technological and materialistic. During our visits, Hank would explain various aspects of the local culture and history, as well as act as a broker between passengers and local vendors.

One of our first encounters with indigenous communities was on PNG’s longest river, the Sepik. True North traveled almost 70nm up the river to the small and isolated village of Angoram where welcoming inhabitants invited us to select items from their artifact market, including traditional masks, carvings and woven items.

The following day we ventured further up the river in the helicopter to the even more remote Palebai village. Here we were met by village elders and given the rare privilege of entering the Yechtan Spirit House in which a group of young village men were undergoing a twomonth- long initiation process, which included having their abdomens and backs etched with painfully deep cuts. The resulting patterns are intended to mimic the scales of crocodiles and indicate that the initiates have attained manhood.

CATCH OF THE DAY 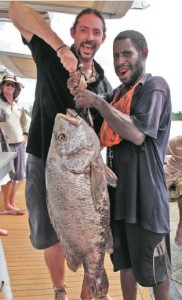 It would be a hardened angler indeed who wouldn’t find their adrenaline gland charged by the many species of sportsfish on offer during our cruise. Speeding Spanish mackerel were a favourite most days, while bruising barracuda, darting dogtooth tuna and wild wahoo took their toll on tackle and colourful tropical trout teased lines and taste buds. And every now and then we had the opportunity to try our luck with the classic PNG sportsfish, the legendary black bass. We first encountered these muscular giants in the upper reaches of the Sepik, with local fishermen showing off live, net-caught examples swimming at the end of a ‘leash’ tethered to their canoes. And some river-front huts even had their own live ‘pet’ black bass lashed through their gills to poles in the river, awaiting their turn on local dinner tables.

A couple of bonus features on our trip included an intimate encounter with a pod of curious and athletic pilot whales that wandered into a lagoon we were anchored in one morning, entertaining passengers with their antics as they approached our tenders for a closer look at the visitors. On another day we happened across a recently wrecked fishing boat that had come to grief on a remote reef. Most of the hull was still intact and the local wildlife, including a rather startled large Maori wrasse, had taken up residence in the ready-made dwelling. Each day’s diving activities were overseen by onboard marine biologist and resident ‘bio-encyclopedia’, Dr Andy Lewis. Andy’s knowledge of the fish and coral species we encountered throughout the trip was exhaustive and each evening he gave a detailed and informative presentation of marine life unique to each area.

Other highlights included anchoring inside the sea-filled, currently dormant crater of Narage Island. It is truly one of life’s rarer experiences
to lay at anchor on a 50m boat in the middle of a volcano that, with its last eruption, generated a 100m tsunami that obliterated everything in its path for hundreds of kilometres.

And speaking of eruptions, on another day we encountered Mt Ulawan, on the island of New Britain. Rising like a giant pyramid out of the surrounding jungle, it spews a constant plume of steam from its summit. Vulcanologists say it is overdue for an eruption that some are predicting might really be one for the record books. And then there was the magical sunset enjoyed with cocktails and snacks on a pristine sandy islet straight out of central casting. As the sun sizzled into the sea, we toasted our good fortune before returning to True North for another taste-bud treat in the dining room. 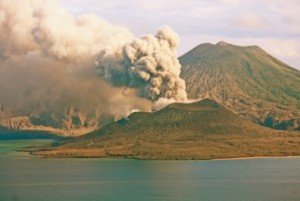 But on the same day that we anchored in the shadow of Ulawan, we were confronted with a sobering reminder that the jungle can be unrelenting and merciless in the price it demands of its inhabitants. On a tender ride up the fastflowing Pandi River, we stopped to speak with a family camped in a remote clearing in the jungle. It turned out that a 21-year-old male had disappeared while fishing that morning, the likely culprit being a large crocodile that had been seen in the area. It was left to our guide Hank to pass on word of the loss to the young man’s family in a nearby village.

The Bismarck Bonanza has it all, from soaring active volcanoes, to tranquil azure seas, eyewateringly beautiful palm-fringed islands and fish-laden tropical reefs. The meals, prepared by head chef Nikholas Flack and assistant chef Zac Johnson are works of gastronomic art, and the crew is ever-ready to ensure that passengers make the most of their time aboard. As skipper Greg Dunn remarked on our last evening aboard True North, Papua New Guinea is our nearest neighbour, yet we are largely ignorant of all it has to offer in terms of its culture, scenic beauty, the genuine warmth of its people and its incredibly diverse marine life and flora and fauna, all of which is so brilliantly showcased on the Bismarck Bonanza. North Star Cruises’s “Going Wild in Style” slogan perfectly sums up our time in PNG. It really is the Ultimate Luxury Boat Cruise Getaway.