A “passage maker” power vessel was defined by Robert Beebe (a retired US navy captain) in the 1950’s in his book Voyaging Under Power, as a “motor boat that can make an open ocean passage sufficient to at least cross the smallest ocean, the Atlantic”. The shortest route across is from Bermuda to the Azores; a distance of about 1850 nautical miles. A safety factor in excess of at least ten percent (I personally on passages use a reserve factor of a least 20 percent) should also be included. This in effect defines a passage making power vessel having a range of at least 2050 to 2250 nautical miles at a realistic speed through the water.

The cruising speed of any power boat dramatically affects its fuel consumption which in turn dictates the quantity of fuel it must carry to safely make the passage. The theoretical cruising speed of a power vessel, whether displacement, semi-displacement or planing, is dependant on its water line length and will not be in excess of a speed calculated by the formula speed in knots equals 1.34 multiplied by the square root of the water line length in feet.

In this article I’m not going into the virtues of the different hull shapes or designs. This subject alone could easily become a “book”. Whether a full displacement hull or a long range planing hull, the diesel engine or engines installed are the key as to how efficiently and safely the vessel will complete the voyage. 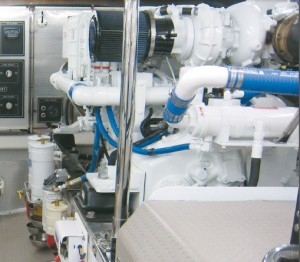 Engine Choice
Marine diesel engines are sold on the basis of horsepower or kilowatts that they can produce. They come in a wide variety of design configurations, displacement, cylinder numbers, gearbox ratios, cooling arrangements, turbo charged or naturally aspirated etc. By its definition, a passage maker will be running at a reasonably high engine load for a considerable time period, with no stops or breaks for possibly weeks on end. Here reliability becomes a key factor in your engine choice.

Engine manufacturers sell horsepower and any one of their engines can be rated at a wide range of available power and engine rpm. There is a great difference between a pleasure launch that might do 100 hours per year and a deep water trawler that spends 45 plus weeks at sea a year.

But surely 400hp for the pleasure boat is the same as 400hp for the trawler? Yes, the power required to push the boats is the same, but the same engine is not suitable for both vessels. Why not? After all, 400hp is 400hp! No, say the engine manufacturers. Put simply, the less horsepower extracted from a given weight of cast iron (engine) then the longer it will live before a major overhaul.

I had the pleasure of being invited to a seminar a number of years back where the guest speaker was the marine sales manager (world wide) for Detroit Diesel Corporation (now MTU). The company manufactured marine engines from less than 100hp to in excess of 2400hp used in all kinds of vessels from pleasure boats to deep sea tugs and ships. When asked how many hours owners expected from their engines prior to a major overhaul, he stated that the following was normal:

To make their engines last these hours, the four power ratings as defined by Detroit Diesel Corporation/MTU were as follows:

Marine Maximum: This applies to high performance vessels where speed is of primary importance and overall load factors are low. Normal or continuous cruising RPM should be limited to 90% of rated engine RPM, and the use of full rated power should be limited to 10% (average) of operating time. 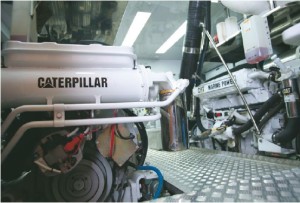 This rating is normally for privately owned vessels in non revenue applications with an average annual hour accumulation of less than 500 hours.

Marine Intermittent-Maximum: This rating is for privately owned vessels with long range cruising capability and/or seasonal charter operation. Normal or continuous cruising RPM should be no more than 90% of the rated engine RPM and the use of full rated power should be limited to 10% (average) of operating time. All boats in this category are limited to a maximum of 1000 hours per year.

Marine Intermittent: This rating applies to medium to high speed commercial boats that operate at moderate to low load factors. These are boats intended for commercial service where 3000 hours or less are accumulated annually. Normal or continuous cruising RPM should be limited to 95% of rated RPM, with intermittent use of rated power permitted. Typical examples include crewboats, water taxis, pilot boats, ferries, charter sportfisherman, and patrol boats. 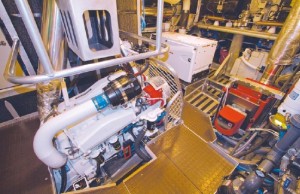 Marine Continuous: This rating applies to medium or low speed boats (normally of the displacement type) which operate up to 24 hours per day, 365 days a year at high load factors. Typical examples include tugs and deep water trawlers. An example of a Detroit Diesel 6V92TA model and its different ratings were:

From the figure above you can see that the continuous rating is less than 50% of the maximum pleasure craft rating. All engine manufacturers rate their diesels on a similar basis to ensure that they are correctly matched to the work that they are expected to perform. When they leave a manufacturer they don’t know whether they will be working in a tug on the equator or in the cold of Alaska.

Our passage maker will more than likely require an engine rating covered by Marine Intermittent or Marine Continuous (Caterpillar has similar definitions but define them as A for pleasure rating through to E for continuous rating) as it could be running a relatively high loading for 1000 to 3000 hours per annum, depending on the mileages to be covered.

Now we have established the correct engine rating for a passage maker lets consider the accessories that are required to increase an engine’s reliability. On a passage of 2000 nautical miles at an average speed of 8.5 knots the engine will be expected to run for at least 235 hours. Most engine suppliers specify an oil and oil filter change at around 250 hours so an oil/filter change would not need to be undertaken on this passage. However, if you were planning longer passages then it would be prudent to specify a larger capacity oil sump where the oil/filter change could be extended out to 500 hours or a bypass oil filter added to the lubrication system that allows extended oil change periods, based on oil periodic sampling. The ability to check an engine’s oil level via a “Murphy style level indicator”, while the engine is running is to me an added bonus, as it has been known that sometimes an engine will not restart due to a starter or electrical fault after a shutdown at sea. Drifting without power in a seaway is not a pleasant experience.

Likewise fuel filters. On a passage, a blocked or restricted fuel filter will entail an engine shutdown to clean or replace the filter,
unless the engine has been supplied with duplex style primary water separator/fuel filters and secondary fuel filters. These are an optional extra available on commercial rated engines and allow the operator to shut off and change a filter while underway. They are particularly useful if contaminated fuel is encountered on a voyage.

Salt water impellers fitted to the cooling system are another weakness in a marine engine as they have a finite life span. A number of passage makers will specify a keel cooling system for the main engines. This eliminates the rubber impeller that can fail and cause the engine to overheat and can again only be fixed by shutting down an engine, usually at an inconvenient time. 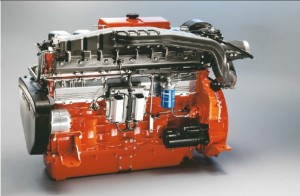 With the cost of diesel continuing to increase fuel economy becomes more important and this leads us into the question of whether electronic controlled engines are suitable for passage making?

Reliability and simplicity have been the key words of cruising yachtsmen the world over. Engines that are uncomplicated and easy to work on by owners or crew who are not marine engineers have always been in demand. Due to environmental regulations in the USA and Europe and the rising costs of fuel nearly all new marine engines today are turbo charged, inter-cooled and have computer controlled governing and fuel injection systems. To the layman these engines have there place in trucks and machinery where a mechanic or technician can easily analyze and fix a problem, but at sea where support is non-existent, they can be perceived to be a liability as the term “simplicity” no longer applies.

If a fault alarms up and the engine shuts down there is often no way of getting them to run again. With the older style mechanical engines a fix could often be made from the spares on board and the engine started again. Normal reasons for a stoppage were fuel or over heating orientated or a simple electrical connection which could easily be over ridden by a person with a reasonable engineering/electrical knowledge.

On the newer electronic engines repairs are just not possible and expensive circuit boards/computers are just not feasible to carry as spares, let alone the computers often needed to re-programme or override any fault settings that have come up. Personally I’ve done a number of long passages with electronic diesel engines and to date have had two minor failures that have been resolved by satellite telephone conversations with the engine dealers. They, like most new pieces of technology, have to be understood and as time goes by will become as reliable as the older style mechanical engines. 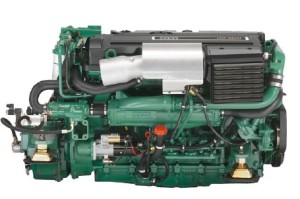 Make the Right Choice
To sum up, a diesel engine installed in a passage maker should be commercially rated, specified with duplex fuel filters, capable of extended oil change periods, have a low specific fuel consumption for economy, and have service/technical support available on a worldwide basis, as there is nothing more frustrating for a cruiser than being held up in an obscure port waiting for parts and technical assistance.

Engine manufacturers compete on a worldwide basis and to me, no particular engine supplier is better than any other, so let your personal preferences prevail in your selection of a suitable propulsion unit. Happy passage making!

A Look At Portable Smokers

PWC and How to Use Them