The Maritimo M45 has been referred to as the Goldilocks boat….not too big and not too small, but just right. Barry Thompson checks out the latest shaft drive version and finds a cruiser that offers plenty in a compact package.

When the first Maritimo M45 was released at the 2012 Sydney International Boat Show it came with an extremely sharp price tag just shy of $A1 million and was reasonably highly spec’d. This was a particular price point target that designer Bill Barry-Cotter set himself when designing the M45 and it’s right on the money!

Standard features for the M45 include either pod or shaft drive engine packages, bow and stern thrusters for the shaft drive version and joystick steering for the pod version, full air conditioning throughout, Onan generator, washing machine, Strataglass clears around the aft of the bridge and even a highly spec’d Garmin electronics package.

Well, things have not changed much and the M45 still remains as one of the best optioned boats of this size for the price on the market. From then on it’s all about what options you decide to add, such as upgrading the electronics, a watermaker and in the case of our boat Andiamo, a Seakeeper M800 gyro priced at $Aus84,000. The M45 is based on the 440 Offshore hull (released in 2010) which has undergone a hull extension at the transom and been given a whole new deck design and superstructure to bring it into line with the existing Motoryacht range. 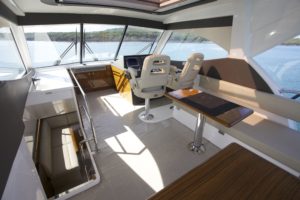 It is also the baby of the Motoryacht fleet. Difference is that while the M48, M50, M58 and M73 have fully enclosed flybridges, the M45 is covered on three sides only, with clears around the aft area.

Unlike the 440 Offshore, the M45 has full walkaround side decks, although still retains the same beam and the interior layout centres around two cabins rather than three as found in the 440 Offshore. 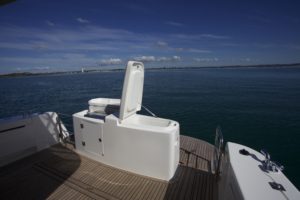 “We tried to cram too much into the 440, but with the M45 we have managed to deliver a boat with superior space and a layout that stays fresh and open, yet still has two generously sized cabins, larger bathrooms, a bigger cockpit, longer flybridge and a more spacious saloon”, says Greg Haines, sales & marketing director for Maritimo.

The M45 effectively starts a new trend for the Maritimo Motoryacht range with a new printline in the sides and bifold stacker doors, yet retains the internal staircase, aft galley and walkaround decks that are iconic features of all the Motoryacht models.

When you walk down the companionway from the saloon to the accommodation areas forward you are surrounded by high gloss teak timber panelling, doors and accents, with soft leather head linings and wall coverings. Such is the attention to detail, all the timber work is given 13 coats of varnish before installation. The same teak timber is carried right throughout the M45, but you do have the choice of other timbers such as cherry and beech and in either matt or high gloss. 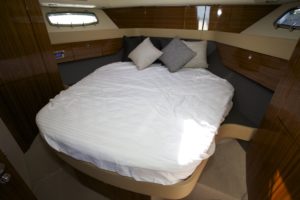 Forward is the traditional queen size island berth with easy access either side and plenty of storage in hanging lockers, side shelves and drawer storage under. There are even a couple of fold-out trays for your tea or coffee in the morning. Haines points out that it’s an owner’s choice as to whether they use the forward cabin or the centre cabin as the master and to date it’s been a mix of both.

Bomar opening ports either side and an overhead hatch, with bug and shade screens, allow for plenty of natural light and ventilation. All the accommodation spaces and ensuites have individual air conditioning as well. 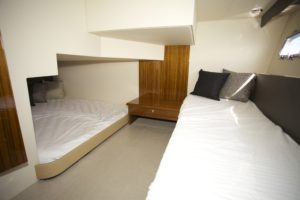 To starboard is a generously sized ensuite with full walk-in shower with glass screen, white Corian bench surfaces and moulded tile sole. There is plenty of headroom. Opposite is the second ensuite which also doubles as the day head for guests. This can be accessed from either the companionway or the centre cabin and it is simply a smaller version of the other.

While this is only a 15m boat, Maritimo has still managed to somehow sneak in a full beam ‘master’, although it’s a little different than you might expect. Under the sole of the saloon, the space has been reserved for either a huge double berth or two singles, with an infill.

There’s also another lounger running fore and aft that can double as a third berth, making this an ideal cabin for a couple and a young child or perhaps three people. Storage is plentiful in a deep hanging locker and drawers, plus ventilation and light comes through three hatches.

Getting the layout of the saloon right is all about best use of the available area and Maritimo has done it well. Light or dark fabrics and timber choices are about the only changes you can make to the saloon area. Split between an aft galley, dinette and lounger, the saloon imparts a feeling of space, with plenty of all-round glass to let in natural light. Sitting at the raised dining area you have fabulous views of what’s happening around you. There’s seating for 4-5 around the high gloss fixed mount teak table. A drop-down table to convert this area into another berth is optional. 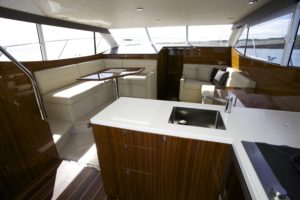 Opposite is the L-shaped lounger, with entertainment and bar area aft, complete with drinks and glass holder, storage drawers, plus a TV mounted on the back of the cabinet lid and hidden out of sight until required. 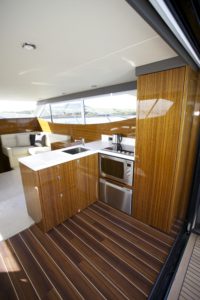 One of the things I really like about the M45 is the placement and design of the galley. Situated aft on the starboard side, the galley can be completely open through to the cockpit by simply folding back the stacker doors. Under the Corian bench is an F&P dishdrawer, microwave and plenty of drawer storage, with a large pantry aft and a full-size fridge/freezer opposite under the internal staircase. The internal staircase leads through to the ¾-enclosed flybridge, which is another area that has been earmarked for entertaining. Forward to port is a large moulded GRP wetbar complete with icemaker, with a wraparound lounger aft and a couple of swing teak tables.

This space can also be easily switched to another double berth, so extending the M45 into a three-cabin boat quite simply.

Twin Pompanette swivelling helm seats are standard and face towards a very large helm station with enough space for at least a pair of 15” MFD screens. Andiamo was fitted with the very latest 12” Garmin 7012 screens, with all electronics being the owner’s choice.

Strataglass clears around the rear and a Webasto sliding sun roof overhead allow you to control some of the light and air through the flybridge, which along with the full air conditioning is all standard.

Heading back outside, the cockpit, which is on the same level as the saloon, is uncluttered and lends itself to loose furnishings. Central to the cockpit is the transom island complete with a deep fridge/freezer and a Southern Stainless barbecue, plus handy storage lockers below. There’s access either side and stainless swing doors offer some security out to the large boarding area. Forward is another fridge/freezer to port and steps either side lead through to the wide side decks.

If you are into your fishing, as is the owner of Andiamo, then you will appreciate the live bait tank under the port coaming and the proliferation of rod holders. The uncluttered cockpit space also lends itself to mounting a game chair. The cockpit sole is finished in teak and Sikaflex and there is an optional rise/fall platform available.

Auckland Harbour is a great place to review boats as you never know what to expect when it comes to weather and while the inner harbour may be glassy calm, there’s usually a swell further out and a breeze to lift the tops off and toss a bit of white water around. Well, not this time.

The day I tested Andiamo, the sea state was so calm you could have barefoot skied to Great Barrier Island. The only ripples were the occasional fish boil-up that broke the tranquil surface or a passing boat that at least gave us a moment of ‘disturbed’ water. This was unfortunate from two points. Firstly, I was keen to see how the boat would handle some choppy water and secondly to check out the Seakeeper Gyro.

Although any rough water trials were not going to happen, I did experience the benefit of the Seakeeper while at anchor. It was very noticeable that every time a boat or ship wake rolled under the boat, the side motion and attitude of the boat remained perfectly level. Compared to the 9m RIB hanging off the stern, which heaved from side to side, we hardly moved and any drinks on the table remained exactly where they were, without so much as a drop spilled. I also found that the gentle hum of the Seakeeper wasn’t an issue and quickly disappeared with the stereo on, or once the four of us aboard started chatting. 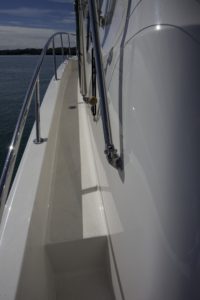 Maritimo has mounted the Seakeeper on the centreline in the lazarette and then when the boat got to New Zealand a custom made cover was made, which doubles up as a further storage area.

While we are on the mechanical aspects of the Maritimo M45, it’s also interesting to know that while the first M45 (released in 2012 at SIBS) was powered by twin Volvo Penta IPS600s, the six that have followed since have all been shaft drive, using a pair of Cummins QSB5.9s of 480hp each, one of the two standard power options. SIBS this year will see the release of a new 6.0L, V8, 550hp Cummins Tier 3 engine that will become the standard shaft drive engine option.

The difference with the shaft drive installation compared to the pod is that the engines and accordingly the weight are further forward. It is interesting that with an extra 550kg added by the Seakeeper Gyro right in the transom, the M45 retains exceptional trim attitude, with almost no squatting aft.
Handling in the dead calm water was superb and the whole boat feels perfectly balanced. Playing around with the tabs certainly helps to get the perfect trim angle and the hull responds quickly to any changes. 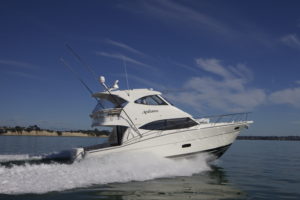 Maritimo has never been a company to sit still for long and while the M45 is now almost 12 months old, its popularity seems to be getting stronger. For me, some of the more endearing features of the M45 are the internal staircase, aft galley and enclosed flybridge. There’s no doubt that for the money it’s an awesome package and coupled with the excellent finish and styling, the M45 could very well be the next Maritimo model to achieve more than 100 sales.

As one would expect from Maritimo owner and designer Bill Barry Cotter, things are always evolving as he continues to grow and alter the fleet, with new models following new models. Certain to be one of the star attractions at the forthcoming SCIBS will be the all new S50, a boat that Greg Haines describes as absolutely outstanding.