Recently, Miss Coventry, one of New Zealand’s most famous circuit boats was seen back on the water. Built in 1968, Miss Coventry has been through a series of owners over the past 47 years, but it wasn’t until Malcolm Packer from Wellington got hold of it, that it was restored to its former glory. And what is really cool, is that it has not just been restored, it is back racing in the current Pro Stock class. Nearly 50 years old and still a winner!

In May 1971, I wrote an article for Boating World magazine, headed, A Champion & His Boat, which was all about the then current National Champion winning Miss Coventry and the Urquhart brothers. A lot has changed since then and while we have all got older and our appearances have changed, the same cannot be said for Miss Coventry. Malcolm has worked his magic in bringing back to life this iconic racing runabout. Every detail that could be rejuvenated has been and the boat looks very much like it did during its racing heyday.

Malcolm brought the boat about five years ago as a stripped out hull on a trailer. There was no running gear, no engine, no steering or engine mounts and the boat looked like it had been outside under the trees for years.

Sadly neglected but not unsalvageable. “While the hull was still sound, I had to replace the main bearers and do some work on the front deck, but otherwise it wasn’t in bad shape”, says Malcolm.
The hull has been painted outside with a custom White Eggshell colour and the interior in Mahogany Copper. The result, along with all the anodised parts is sensational and a credit to the countless hours that Malcolm has put into the restoration of this truly classic race boat.
Once the work on the hull was completed, Malcolm then had to set about completely rerigging the boat, from the steering wheel to the rudder. He was conscious of rebuilding Miss Coventry too much the same layout as before, although after looking at many photos he did notice that over the years, that too had gone through a few changes. For example, when the boat was first launched it was right- hand steer and then it was later changed to left to suit the anti-clockwise courses.
There is no original running gear left in the boat apart from the prop shaft and skeg. The rudder has been changed from internal to external and the Casale V drive while still 12 deg, is now running 17:1 gears. The 1956 Chrysler New Yorker 354cuin block, which was chosen especially to fit into the Pro Stock class.

Malcolm has moved the seat further back with a longer steering column as he didn’t like the idea of having his legs well under the dash if the boat flipped.

What is interesting is the engine, which is based on a 1956 Chrysler New Yorker 354cuin block, which was chosen especially to fit into the Pro Stock class.

This is a stock V8 class designed to make for affordable yet competitive V8 racing. The engines are limited to 358cuin(6000cc) and have restrictions on the carburetor size as well as camshaft lift and must run on petrol. Inside, the Hemi engine features K1 forged rods, 10:1 Ross forged pistons, s/s valves, 300 duration/485 lift hydraulic cam and a HEI Vertex style ignition. On top, Malcolm runs either a single or twin four-barrel Holleys on a tunnel ram, depending on the class he is running or if the boat’s on display at a show. All the other parts are by Hotheads or P.A.W and he also has the option of running headers or zoomie pipes.

“I have set the boat up as a restored American drag boat complete with the dual tunnel ram and rear wing, so it looks authentic but can easily change it when I run Pro Stock”, says Malcolm.

The first few outings in March this year at Petone and the Manawatu saw mixed success as Malcolm learnt not only how to drive the boat but also adjusting the set-up for the best performance. Although he managed to pick up a 3rd in the North Island Pro Stock, a pair of blown head gaskets sidelined him for the big meeting at Manawatu.

In the late 1960s and early 1970s, ‘flat bottom’ unlimited racing was popular in New Zealand and one of the best-known names was Miss Coventry. The first Miss Coventry, which won the NZ unlimited racing runabout championship in 1965, was powered by a 327cuin Chev Corvette engine, which was later changed to a big block 427cuin Ford. After she sank and showed signs of wear and age, it was decided to look for a newer and more modern design. And so came the second Miss Coventry that became one of the most recognised boats on the New Zealand racing scene in the early 70s.

Built by the masters of circuit boat builders, Frank McLeod and Jack Wedgwood, Miss Coventry, was a Fred Wickens design that in 1966 had won its class championship in

America. Glen Urquhart had earlier flown to the US and after talking with the designer, purchased a set of plans.
The 18ft long x 6ft 6” wide hull needed to be strong, so single sheets of 6m marine ply were imported from Australia. The bottom was two layers of 1/4” coach wood and the frames and battens spruce with mahogany ply on the sides. Even the engine runners were made of mahogany. The hull was then given a layer of fibreglass cloth and painted.

When Miss Coventry was first launched, it was powered by a conventional Ford 427, pumping out around 500 hp. This was still enough power to make the boat extremely competitive, but the Urquhart brothers wanted more.

“The 427 engine was a strong engine and very reliable and at best used to give us a top speed around 90 mph at the end of the straights, but we were looking for an engine that would give us a more consistent power torque at the top end of the rpm range and better acceleration out of the corners”, says Glen.

As luck would have it, about that time Ford released a limited number of Ford 427 single overhead cam engines – known as the Cammer – and the brothers managed to secure one. However the Cammer was, in Peter’s words,

“a bitch of engine to keep tuned and to work at peak efficiency”, but when it ran well, there was little the competition could do to stay in touch.

The 7 litre single overhead cam engine with a pair of twin 650 Holley carbs was reputed to produced over 600hp. It was also one of the rarest performance engines in the world at that time. Only 30 were made in the initial run and the Urquhart brothers managed to secure arguably the only one ever to leave the US from that first batch. However interestingly less than six months ago another 427 Cammer turned up in New Zealand for a hotrod. While the Miss Coventry engine cost not much more than $US2500, that same engine is worth well over $100,000 today.

The Cammer arrived from the States, by the way of their mother who brought it in as excess baggage when she returned to New Zealand on the cruise ship, SS Orsova.

However not content with just running the factory hand built performance engine, it was stripped, line bored, the crankshaft clearances increased, the heads polished and the block faced off. As well as been ported and polished, the short block was blueprinted and then balanced by the master balancer of the time,  Ted Thompson.

Throughout its tenure in Miss Coventry, the big high revving engine was left on carbs, although there was some thought about fuel injection and even supercharging, but neither ever eventuated.
Miss Coventry was clocked on Lake Karapiro at 98mph, although never official cracked the ton. “We certainly ran close, even during the racing, but never managed to get an official certificate through a measured mile”, says Peter.
The equipment in the boat was state of the art for the time. The full-width alloy trim tab and cavitation plate was hand operated by a control lever. The 3/16th plate was not hinged but fixed at the transom and flexed when the control lever was depressed. Two contoured bucket seats were fitted, although the boat. 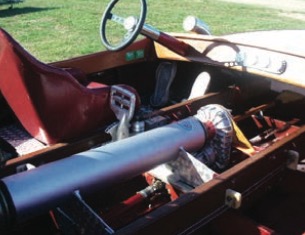 The drivers seat was moved further back and the whole raised foredeck area changed.

was only ever raced with a driver. The other seat was to take out mates and sponsors for a run. The Casale vee-drive box had a clutch handle, and the normal ratio used for racing was 18% step-up and a variety of gear ratios were available. A two blade Italian Cary propeller was the prop of choice.

Like any new boat, success was earned through trial and error. In the late 1960s and early 1970s, Miss Coventry won countless national titles, including dominating both the NZ Unlimited auto racing runabout and NZ Unlimited racing runabout classes. In those days, they had to race against V12 Allison aero engine powered boats, such as Aquanaut.

In the early 1970’s the Urquhart’s decided to retire from racing for a while and sold the engine and boat separately. The Cammer engine was sold to Kevin Gray, a dirt track

saloon car driver for $3000 and then onsold to Alex Hogg, the current owner, who has installed it in a classic dragster. The boat was sold to Ian Williams from Ruawai, who refitted a 429 Boss Ford and raced for a few years with some success.

The boat then went to Leo Meharry in Rotorua who campaigned it for a few years, before selling it to the Latimer family in Wellington. Then along came Malcolm who brought the well worn-out shell and spent the next five years restoring it back to its former racing glory.

While it would be great to see the Cammer back in Miss Coventry, at least knowing that both the boat and engine are in the hands of passionate owners who have lovingly restored them and more importantly still racing them is fantastic.