The Sea Ray SLX-W 230 is a luxurious family bowrider that can become a towsports machine with the push of a button.

The Sea Ray SLX-W 230 comes standard with three ballast tanks and the Dynamic Running Surface with Wake-Shaping tabs that turn the boat into a serious towing platform. An unusual option on a boat this size is the Mercury JPI system, combining the main propeller with an electric bow and stern thruster for precision handling not only around the dock but for retrieving those in the water.

Plus if you are planning to spend the day with the family and towing water toys isn’t [art of the plan, then it’s also a great bowrider that offers everything, plus more for fun boating.

There are a number of key features on Sea Ray SLX-W 230 which are quite cool. There’s a designated storage space for a carry-on cooler, a lockable wakeboard and surfboard storage with vinyl matting and a gas-assisted fiberglass lid. If you like your sounds, then a wireless Bluetooth stereo with JL audio speakers and iPod/MP3 functionality are standard. As is the manual gas-assist tower with Bimini, tow point and nav light Sea Ray designed the SLX-W 230 to be a luxurious family bowrider that can become a towsports machine with the push of a button on the dash-mounted touchscreen. The boat comes standard with three ballast tanks (870.90 kg capacity) and the Dynamic Running Surface with Wake-Shaping tabs that instantly turn the boat into a towing platform that should impress serious wake surfers.

As an inboard boat, it keeps the style consistent with the best in the industry. The engine is in the traditional spot, under an aft sunpad rather than in a large box taking up the centre of the cockpit. In this manner the family bowrider concept remains intact.

More to the point, however, is the fact that while most builders tout the family day boat/water sports crossover, Sea Ray managed to take it to another level with this boat. It is  truly a qualified blend of both worlds. Our tour of the SLX-W 230 shows a cleverly laid out bowrider with the luxury of Sea Ray’s SLX lineup and a high freeboard that translates into the safety of a deep cockpit that families with small children will be especially keen on. But hidden in all that luxury and comfort is the heart of a wake surf generating machine bent on competing with the best in the crossover industry.

Our test boat also had a feature that Mercury Marine rolled out recently… Joystick Piloting for Inboards or JPI. This put a fascinating twist on the inboard wake boat concept by making it joystick manoeuverable for close quarters. Let’s go over that again… a 7.01 m, single engine, inboard bowrider with joystick functionality. Impressive indeed.

The Sea Ray SLX-230 that we tested was one of the first to be introduced with JPI, Joystick Piloting for Inboards and it worked flawlessly. It combined the power of the main shaft-driven propeller with an electric bow and stern thruster for precision handling not only around the dock but for retrieving the person in the water. To make the driver’s job as easy as possible, the 12.5” (31.75 cm) Dynamic Display touch screen at the SLX-W 230’s helm has three modes. All the driver has to do is choose among Cruising, Wakeboarding or Surfing and the computer takes over. Choose Surfing and then touch L or R for Left or Right and the aluminium surf fins mounted on the boat’s transom abaft the propeller and rudder in the V-drive propulsion system adjust. Then the driver simply advances the gunwale-mounted shift/throttle control to full forward and steers where he wants to go.

Now with the joystick activated we have linked connectivity with the single engine shaft driven inboard propeller and the two electric thrusters. Move the joystick to move the boat in any direction desired, just as we’ve now come to expect from any boat with joystick functionality, only now it’s without pod drives.

The joystick is progressive. The further it is moved, the more power is applied to the main engine. The bow and stern thrusters are single power only, they’re either on or off. But our tests showed that adding power by advancing the stick will provide the kick you’re looking for with just the single engine providing the added power. It works. Now as is the case with electric thrusters, these will only take so much before they heat up and go into a protected shut down mode to cool off. However, we messed with this feature for well into the better part of 45-minutes with no such effect so this is a non-concern. Normal operations will never come close to that much of a workout.

The indicator ring around the base also shows direction of thrust. When we move the stick to the side, the green ring turns yellow and lights to the side. If we rotate the joystick the light rotates in the corresponding direction. Now is this just a gimmick? Perhaps, but truth be told, our test captain found himself glancing at the coloured ring to ensure that his hand was controlling the stick as desired. It’s a fine line between straight up and slightly rotated so we did come to embrace this feature.

So is it as simple as moving the joystick in the desired direction? Yes it is… and then some. A few minutes of messing with the stick allows for a touch that gives surgical precision to the handling. For example, we found that when moving the stick to the side, the two thrusters activate. But if wind or current affect the boat slightly and the bow or stern move ahead of one or the other then a slight opposite rotation kills power to the desired thruster and we can then straighten out the sideways slide to present the whole side to the dock at once.

Furthermore, we rotated the boat in between two slips that were spaced only cm beyond the length of the boat. With slight fore and aft motion of the stick we were able to achieve the precision that allowed us to pull off this manoeuver. It’s a flawless control system that will go a long way towards making even beginners look like pros. Big Enough For A Crowd

Because engine data is also monitored by the Dynamic Display, there are no additional instruments at the helm. The SLX-W 230 has Digital Throttle and Shift, and power-assist steering. There’s a remote for the stereo, which has Bluetooth, iPod and MP3 connectivity and the accessory switches are backlit stainless-steel models. The driver’s seat swivels and adjusts fore and aft and has a flip-up bolster.

Part of the fun of wake surfing is showing off for friends so the SLX-W 230’s cockpit is designed to accommodate a crowd with seating that wraps around from the port console all the way to starboard. The backrest for the seat adjacent to the helm can be converted for forward or aft-facing seating making it comfortable for the legally required observer when towing. There’s a cutout in the centre of aft sunlounge that makes it easy to head aft to the swim platform. The standard tower has a towrope attachment point and an integrated bimini top with space for up to four speakers. Having space for 13 people means storing all their gear. Because the boat only has a single centre-mounted ballast sack, there is nothing to take up space under the seats. This leaves the space beneath the port and starboard cockpit lounges wide open for storage, including a dedicated spot for a carry-on cooler to starboard. There’s also an in-floor board locker between the driver’s and companion’s seats.

Small sunpads on each side of the centre pass-through are comfortable to sit on when the boat’s not moving. For convenient storage of boards and towlines, there’s a large trunk locker on the boat that opens on a gas strut. This means that we don’t have to travel all the way into the cockpit to do a quick board change.

The bow is laid out in the usual configuration of a bow rider for more traditional family cruising. It includes angled backrests on the front of the consoles, stainless steel grabrails integrated into the deck for more comfortable use and there are speakers in gunwale inserts. There is storage beneath the seat bottom cushions, behind the backrests and a dedicated anchor locker in the foredeck. Sea Ray powers the boat with a 370-hp MerCruiser 6.2L ECT TowSport V-drive inboard with Digital Throttle & Shift and a ZF 63 IV transmission geared at 2:1. The advantage of the inboard is that the propeller is far forward of the transom so there is little chance of coming in contact with it. The disadvantages are in the close quarters maneuverability that, as we’ve clearly demonstrated, are negated with the optional JPI system.

Top speed was reached at 40.2 mph. Best cruise was measured at 3500 rpm and 23 mph. At that speed her 38.2 lph fuel burn translated into a range of 88.6m, all while still retaining a 10% reserve of the boats total fuel capacity.

As for handling, the SLX-W 230’s is consistent with the rest of the Sea Ray lineup in that it’s got both a nimble and agile feel. While we had calm conditions on test day we did get a sense of her ability to cut through chop with no hull slap or pounding as we crossed the wakes of our chase boat. We also failed to get spray onto the boat in spite of our best efforts. This isn’t just another bowrider with a surfing package. The Sea Ray SLX-W 230 was drafted and built for wake surfing and boarding with a bottom that was designed for the surf fins and triangular trim plates. Sea Ray committed to the boat with the touch screen control for all the on board systems that will appeal to millennials who don’t want to mess with a bunch of different switches for the ballast, surf fins and trim plates. The fact that the boat still has v-bottom with a 21-deg transom deadrise, means she’ll ride better than many other wakesurfing boats when the winds and waves pick up. 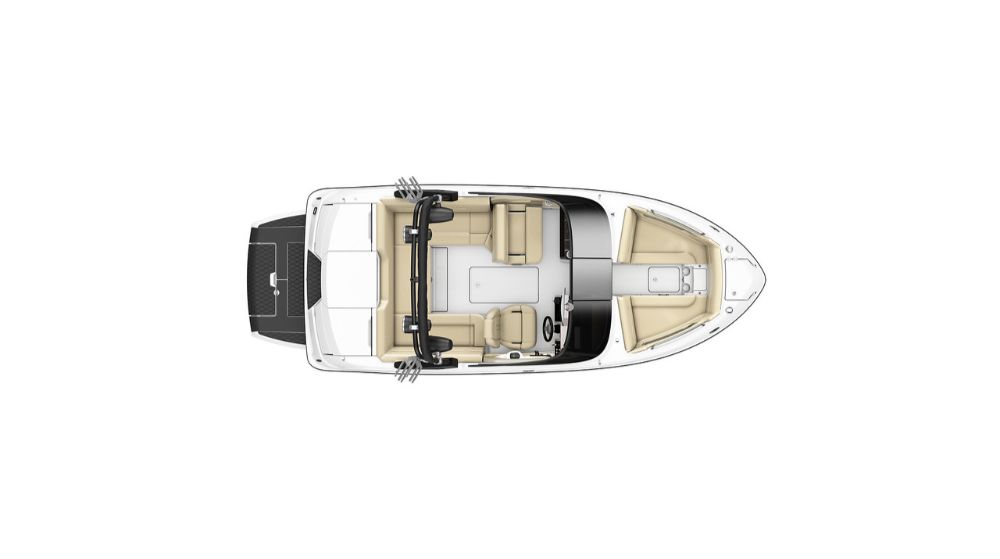