There’s no doubt that one of the most popular forms of vehicle on the road today are twin cab utes. People, like me buy them, (Isuzu D-Max) for their versatility, practicality and the amount of useable space they provide. Well according to Rick Lawrence, they were the same parameters that he set when he designed the Seaforce 530 Ute.

I wanted a fishing boat that offered more protection than a centre console, and more fishing area than a full cabin boat provides, hence the cuddy cabin”, says Rick. Apparently, other people thought the same, as the boat was awarded the 2008 GRP Fishing Boat under 6m award at the Hutchwilco New Zealand Boat Show. 30 years ago, the first boat the company built was called a Seaforce Ute and Rick felt that it had proven such a good concept, which when it came to upgrading the hull, it seemed only right that the name should carry on.

In 2008 he released the 530 Mate, the world’s first true fibreglass pontoon cabin boat and a year later came the 530 Ute, a boat based on the same hull but with a cuddy cabin design.

The hull of the Seaforce 530 Series (Ute, Mate & Skipa) is unique as no other grp manufacturers are producing pontoon style hulls. With the obvious success of alloy pontoon boats over recent years, Rick said he knew he had to join them, something that had never before been successfully tried in fibreglass.

“We took the existing Seaforce Utility hull and severely modified it with the result of both a wider and longer (350mm on the waterline) hull, which with the pontoon shape provides a massive improvement in stability and weight carrying capabilities. It also assists in the ride and makes for a very dry boat”, says Rick.

“After the immediate success of the 530 Mate, I was getting asked by clients for something the same but with a shorter cuddy cabin and even for a centre console,” said Rick. While he admits it was a very complex and challenging job making the master plugs, production is now very straightforward. 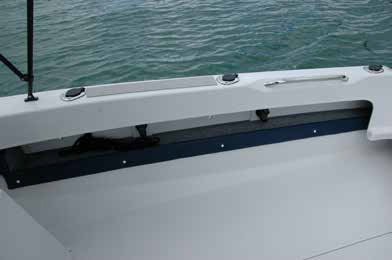 The hull is foam filled to the gunnels, providing a ring of confidence and is CPC Compliant for level floatation. There is no timber in the boat, with a full fibreglass stringer system under the cockpit sole, an inner liner and even an all fibreglass transom. Seaforce uses isophthalic resins throughout and polyethene foam. Nothing to rot in future years! There is 60% more foam in the 530 Ute pontoon model than was in the conventional 530 Ute.

While the same hull is used for all there 530 models, the decks are what determines the difference. The Mate is a full cabin version, the Ute is the cuddy and the latest model, the Skipa is the centre console model.

Being a boat that is indeed gone to be used predominantly for fishing, the simple, uncluttered layout reflects that. Firstly the side coamings are at a moderate height for fishing, not too low and not too high. They have wide flat surfaces which are ideal to sit on when waiting for the fish to bite. Standard in the 530 Ute is six-rod holders, three either side and they are not just cheap plastic ones. One thing that is noticeable about Seaforce boats is they don’t skimp on the fittings, so what you get is quality.

Full-length side pockets under the coamings allow for 2m plus rods and there is also provision for a large underfloor wet locker. A 70-litre fuel tank is standard and foam fills the rest of the underfloor cavities.

The cuddy is designed as a place to stow gear and comes with three side trays. However, if you are going to want to keep gear in this area, you’ll need to go for the option stainless floor rail to stop everything sliding back into the cockpit.

You can also add a squab if you want somewhere for the kids to go. The foredeck access hatch is positioned so you can open it from the cockpit, so you don’t need to stoop inside. This then easily falls back against the windscreen.

The Seaforce 530 Ute has an extra large and deep anchor locker, so you have the option of a drum winch, deck capstan, or as in the case of our test boat, nothing at all. Interestingly the boat comes prewired for winches or capstans. Nice touch by Seaforce. For the test, we had the very first Simrad GO9 chart plotter navigation display that I have come across. Behind a super-bright, multi-touch widescreen display lies a built-in GPS receiver, GoFree Wi-Fi, and NMEA 2000 connectivity. It is designed to bring up all the engine data, connect with smartphones and tablets and control your onboard sound system.

However, while it is certainly a great unit and no doubt it works beautifully, we couldn’t get any fuel data to record. To be fair, this was because it was the first time the boat had been in the water and we had not done any programming. The best thing about having a unit like the Simrad GO9 is you don’t need any instruments as they are all built into the system. Now that part I was able to read.

The seat bases in the test boat were twin moulded units with sliding bucket seats. Rick pointed out that he sells the 530 with a variety of seating options, from nothing at all to full back to backs. Rick likes to leave that to the owner. There is space in the aft deck area for twin batteries in a separate raised locker, with moulded steps either side. These can be filled in with seat cushions if required. Standard is a saltwater washdown, 12-volt accessory plug (ideal for electric reels) and the choice of what you do for a bait station and the cutting board is up to you. There is a broad range of options available from Seaforce.

The test boat was powered by a Honda 90hp, with the option being 80-115hp. We recorded a top speed of 40 mph, which I felt was more than enough for the boat. It’s a very stable platform and on a calm Auckland Harbour, it performed without any vices. With two of us sitting on the gunnel the boat remained impressively stable.

Coming home after a few hours on the water I sat the boat on 4500 rpm @ 29 mph and while we couldn’t get a fuel reading, I would estimate that we wouldn’t have been using much more than 25 lph. At 5800 rpm that would increase to around 35 lph. Still very economical boating. You can see and feel the pontoon shape working as the water is sprayed level and flat.

The Seaforce 530 Ute is a very practical and efficient fishing boat for inshore boating. There is a huge amount of useable space, right through to the bow area. It’s an easy clean with the hose and brush when you get back. The Ute has been the most popular model in the 530 series and it’s certainly easy to see why. If the 530 Ute doesn’t quite do it for you, then Seaforce are well underway with a new 7m version, due for a late 2017 release.