Smuggler Marine’s all new Strata Smuggler 750 Cabin, provides a new perspective on cabin RIBs, a market that until now has been dominated by one player. 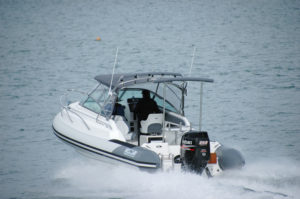 Dave Pringle, MD of Smuggler Marine has to be one of the most innovative and progressive boat builders of RIBs in the country. He continually breaks with tradition or at the very least improves on it. Firstly it was his ultra luxury superyacht tenders, then adapting the Sealegs technology to his larger RIBs, introducing a very inventive walk around mid cabin and his latest a full cabin RIB.

Cabin RIBs from Kiwi manufacturers are not new. Lancer had one years ago, Aquapro released their Raider in 2003 (the moulds were later brought by Rayglass and discontinued) and of course, the most successful of all has been Rayglass with their Protector series, first launched in 1997 and now with over 1000 boats sold. So what’s different about the Smuggler Strata 750m Cabin? Firstly it is currently the only full cabin RIB manufactured in New Zealand. While the Rayglass Protectors have an open forward section, access via a large bulkhead door, the Strata 750 cabin and deck continue right through to the bow. No other Kiwi manufacturer is offering this full cabin concept.  The deck line and cabin top have been adapted from the Smuggler 695 and it uses the same hull as found under the Strata 750 Mid Cabin and Centre Console models. If you are at the helm looking forward, you don’t see anything to indicate you are in a RIB. It’s not till you look aft and see the big 600mm Hypalon tubes either side of the cockpit that it is obvious.

“We were continually being asked for a full cabin boat as while we had people that liked the Strata 750 mid cabin model they were looking for something that offered overnight accommodation and more all weather protection”, says David. The result is the Strata 750 Cabin, which brings together the RIB technology already well proven with the 750 Mid Cabin and the fibreglass cabin top of the Smuggler 695. 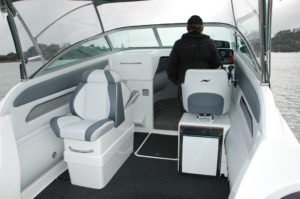 While Smuggler also wanted to produce a boat that didn’t need a seriously big rig to tow it – all up on trailer weight is around 2100 kgs, which is in fact 250 kgs lighter than the Smuggler 720 – they didn’t want to make it so light it wouldn’t handle the rougher water. Construction of the hull is a combination of three layers of triaxial and five layers of chop strand, with four full-length grp bearers under a grp liner. The bulkheads and rear deck supports are all structural, so the entire grp componentry is free standing. The five chamber per side Hypalon tubes are computer cut and assembled by Southern Pacific and then taped to the purpose designed hull. The finish is exceptional, with no hint of a glue strip anywhere. The profile of the tubes was also designed not only to be functional but also to look right and feature a tapered design forward that blends in seamlessly with the grp deck. The appearance of the boat is one of a well balanced and stylish design that is in keeping with the Smuggler family of boats. 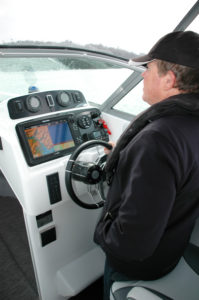 The first Strata 750 Cabin has gone to a Perth based client, where it will be used extensively along the coast for fishing, cruising and as transport to out of the way paddle boarding areas. Hence, the paddle board racks. A pot hauler was to be installed when the boat arrived in Perth to retrieve crab and crayfish pots. The layout is the same as the Smuggler 720 but is longer by 300mm in the cockpit. The cabin comes with the standard V-berth accommodation with an infill, toilet under the centre squab and plenty of standing headroom. The bulkhead means you can have a solid door fitted if required or a privacy curtain.

With no dedicated access around the outside, Smuggler has installed an extra large deck hatch should you need to go forward and on the deck for any reason. The grp bowsprit carries on well passed the front of the tubes and all the anchoring is done from the helm, courtesy of a Lewmar auto winch. Just like the Smuggler 670 and 720, the dash features a split-level display with instruments mounted above a Raymarine Hybrid Touch 127 and all necessary controls, switches and displays alongside and below. A Cobra VHF keeps you in touch with your mates, the weather or Coast Guard, while the Fusion 650 provides the good sounds. The Isotto custom soft grip wheel gives the boat a classy look, plus I liked the fact that Smuggler has provided a couple of dedicated recesses for your cellphone and keys. The driving position is good, either standing or seated and there is good visibility through the screen or the clears. The soft top bimini and clears can be replaced with a fixed grp hardtop and windows, which as expected is precisely the same as found on the Smuggler 670 and 720. Seating is again as you would find in either the Smuggler 670 or 720 and there are plenty of options. The owner had opted for a single fully adjustable helm seat mounted on a 12 & 24-volt fridge, with a king/queen back to back opposite with a massive storage bin base. Storage is also provided in two under floor lockers, a dry one forward of the 330-litre fuel tank and a wet one aft, plus forward side shelves. Missing from the Smuggler 670/720 layout are rear side shelves, which have obviously been replaced with the tubes. There is a trio of lockers in the transom, housing the batteries and access to some engineering and electrical systems.

Jump seats either side provide some extra seating and the boat comes with a large central mounted Manta combo bait board and rod rack. There’s also provision for six-rod holders above on the rocket launcher. This can be folded down should you have a height issue when storing the boat. The second Strata 750 Cabin was also well underway when I visited the factory in early June. The difference is it will be a twin outboard version, which has required some alterations to the transom. The transom is moved back further and the two seats are replaced with removable bin seats and the stern ladder is replaced with one over the side of the tubes. 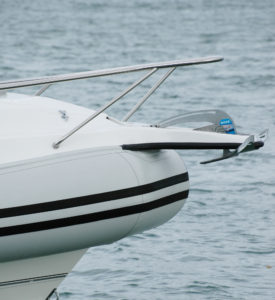 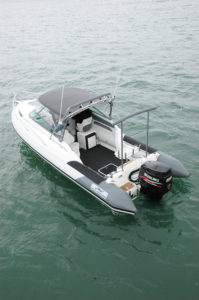 Auckland Harbour in winter can be so unpredictable, that half an hour can make a difference between whether you are going to get sunshine, rain or a howling gale. When we arrived at Hobsonville, the weather was flicking between rain and drizzle, so as for getting great photos, it was not so good. The moderately calm water was no match for the Strata 750, with the hull as predictable as I would have expected. I didn’t need to go and prove its ability in rough sea conditions, as I already know that this ultra deep vee 27 deg Smuggler hull is unsurpassed in rough seas. It may date back to the late 70s, but the hull has been tweaked and lengthened by Smuggler Boats in recent years and it’s unquestionably even better than it was 40 years ago.

Top speed with the single Suzuki 250 DFA was 45.5 knots @ 5500 rpm with a fuel consumption of 82 lph. Drop that back to a more sedate cruise speed of 33.5 knots @ 4000 rpm and the fuel usage drops to a very acceptable 47 lph. The engine is backed up by electronic fly by wire shift and power steering, so driving is an effortless task.

If you are looking at the RIB version of the Smuggler 720, then expect to pay a little more as the Strata 750 Cabin is higher speced. The tubes alone are around $NZ22,000. But David says that if you look after them, they should last you 25 years plus. The Strata 750 certainly brings a whole new perspective to big RIBs and it isn’t about to stop there. Smuggler is well underway with their first Strata 11m Full Cabin, powered by twin Volvo Penta D4 sterndrives. And what about adding Sealegs technology to the Strata 750. Not going to happen says David, as the boat is too heavy. 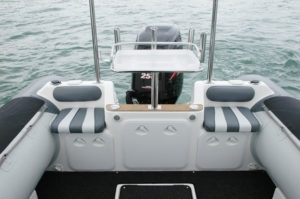