Fresh from conquering Cape York this group of adventurers now head south to Tasmania in the very capable Hamilton Jet boats. The Island state of Tasmania lies some 240km off the coast of Australia’s mainland and remains virtually untouched by development, where even the Holden Kingswood, Chrysler Valiant or Humber Super Snipe can still be seen operating as daily drivers and boats are still constructed using traditional methods using ancient Huon Pine timbers. Despite its 68,401 square km size and a population of half a million people, Tasmania is a pristine island with 45% of the land mass protected under Reserves, National Parks and World Heritage sites. The terrain is made up of mostly hard Dolerite; even the high tensile 6083 10mm thick alloy jet boat hulls are no match for this unforgiving terrain, yet do survive to complete the expedition. 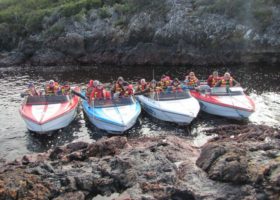 The groups expedition boats and equipment were shipped directly to Tasmania in their bespoke 40 foot Hamilton Jet sea container fresh from the recent and successful Cape York Expedition earlier this year. The boats and trailers have been subject to extensive repairs by local Tasmanian engineers in anticipation of the unforgiving Tasmanian terrain. The alloy Hamilton Jet Boats whose design was developed and proven in New Zealand over many decades to tackle the shingle river beds, soon faced the unforgiving and ancient terrain of the Tasmanian Rivers, as did all the expedition members.

Day one of the Hamilton Jet Van Diemen’ s Land expedition saw the group launch into the Huon River at Huonville, with some assistance and advice from local Jet boat tour Operator John Allport. The river was not clear, but rather like rich dark tea, coloured from the heavily woody tannins leaching from old growth forests; making river navigation all that much more difficult. It was not long before the low and challenging river conditions saw the four boats making their way through ‘ rock gardens’ as they climbed upstream, eventually being stopped by a large fault in the river, the impassable weir like barrier dictating it was time to head back to the trailers.

One boat had to stop briefly as steam poured from the exhaust, a consequence of the Cape York Expedition, as sand had blocked one of the 383ci Chevrolet V8 exhaust manifolds. Another boat had a small jet unit failure with a bolt coming loose, blamed on the previous expeditions poor roads. All drivers reporting ‘ hits or touches’ on the way back downstream where ‘ reading the river’ is more difficult, the tough Hamilton Jet hulls stood up to the punishment with all boats safely back on the trailers, albeit one suffering a split in the hull bottom. 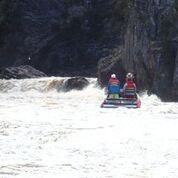 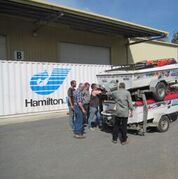 The group headed to Strahan to meet local Ron Morrison, who would act as a guide for the next couple of days. The King River was first to be tackled, an exciting river that is heavily colored by tannins and old mine tailings, the river is flanked by steep hills and an old historic mine ‘ rack’ railway line. Eventually after going up a few good rapids and into a steep gorge, an impassable rapid was encountered. The rocks are volcanic hard and don’ t wear smooth, resulting in sharp long geological formations; that are difficult to see as they don’ t have a visible telltale as they shed water, essential for jet boat navigation in shallow rivers. A few of the boats had ‘ touches’ and big hits, frequently even for the most experienced jet boaters.

What better way to visit pristine areas of wilderness than in a jet boat, no footprint is left behind, virtually no wake and no local resources are used or constructed, like trails, roads, etc. to get there. 22km across the infamously dangerous Macquarie Harbour is the mouth of the Gordon River. Ron owns a landing barge used to service the many Salmon farms in the harbour, the plan was to load  the boats onto the barge for safe passage across the bay. 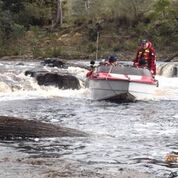 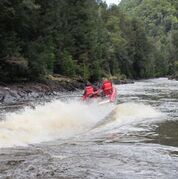 However, after checking the forecast and it was decided to aim for a 5 am departure and drive the jet boats across the harbour and past the treacherous ‘ Hells Gates’ . If the weather turned foul during the day, there was still the option of having Ron’ s son bring the barge over. 5.00am and 30 minutes before daylight, with Ron in the front of the lead boat, he assured safe passage across the harbour, avoiding the rocky outcrops and salmon pens.  Passing by the very small Sarah Island, which was home for 320 convicts sent from the UK in 1820 for crimes as minor as stealing a blanket or bread; 10 years ago it was home for two jet boats that did not make it across the harbour!

All four boats made it to the Gordon River and into the Franklin-Gordon Wild Rivers National Park, famous for it’ s Huon Pine trees up to 2000 years old; stands of trees as old as 10,500 years have just been discovered! While a relatively large river in jet boat terms, it is a real magnificent part of the world, the group progressed on upstream through a series of rapids before coming to a massive waterfall the locals call “a river split”, the end of the road for the boats. This allowed for a short trip up a tributary, the

Dennison River. From the waters edge, Ron pointed out logs he had fallen back in the 70s as a timber getter. The group were now some 120km from town and in the 70’ s, Ron rowed that entire journey, upstream to work felling Huon Pine. That trip is done in just 3 hours by jet boat. We carried on downstream stopping for a look at the Franklin River confluence, as river motorised craft are no longer allowed on this river. From here Ron takes the wheel of a jet boat and takes the group back to the river mouth. The harbour came up a little choppy, so the group hug the bank the entire way home, stopping for a tour of a salmon farm and harvesting barge. The round trip for the day was 230 km of boating, the last kilometer saw one boat towed back on the plane with a failed starter motor.

short run down to the sea. Back on the road and crossing the Piemen Rope Ferry at Corinna, the boats are again launched and head upstream on the Piemen River towards the Wild Rivers National Park. After around 17km progress is halted by a large dam not noted on the maps, so it’ s back downstream, past the launching site for a run to the river mouth. The night is spent in some cabins at Corinna, a population of 3 and a diesel electric generator for power. 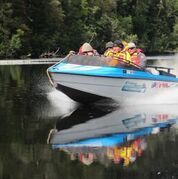 It was a relatively slow start to the fifth day, the objective to boat the Arthur River farther north-west. An eager crew left the expedition leader to wrap things up at Corinna after a big night of Mutton Bird and Wallaby Patties. With limited cell phone coverage outside the Arthur River township, three boats were launched at 11 am as there was no sign of the fourth boat and her crew. For 25 kilometers the river wound its way through bush lined shores until it met the Frankland River.

It was only a short two kilometers before the rocks and trees finally spelled the end forcing a return to the Arthur River. Ten kilometers upstream the rocks had become bigger, and the path narrower until finally, a un-climbable chute through a solid rock garden was the final straw, it was decided to turn around and meet up with the missing boat and crew. Meantime the fourth boat was being repaired in the Parks and Recreation Yards after the trailer had tried to swap ends with her tow vehicle en route on a gravel road, no wonder they were late. After the jet unit steering nozzle was straightened and reverse bucket reinstalled, she was launched into the Arthur River, only to explore deeper and further into the Tasmanian Wilderness on the best adventure river of the trip.

The Duck River at Smithton is tackled the next day, a short but challenging run upstream climbing over logs, rocks and navigating rapids before heading to Burnie and ultimately a 1950’ s Diner in Deloraine.

The South Esk River is a stark contrast to the previous weeks boating, willow trees lining the banks often through

farming country, much easier on the Hamilton Jet Boats and drivers. A little challenging at times with low hanging limbs, one boat losing its windscreen for the second time in as many expeditions. “Tasmania – Explore the Possibilities” is written on the vehicle number plates, fitting as that has certainly been achieved on this expedition. The boats will now head back to New Zealand and the CWF Hamilton Jet workshop for some much-needed repairs and overhauls before departing on the next expedition to Central America, including Panama, Costa Rica and Columbia. 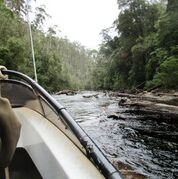 First Ascent of the Snowy River