Becoming the fastest person on water is unquestionably the hardest and certainly the most dangerous record to attempt on water. The challenges are unimaginable and many have died trying to set it. It is now almost 36 years since anyone has seriously attempted the world water speed record, but 2014 could see a rash of new interest.

The main problem with the water speed record is that the boats are going into territory that has never been explored before. The current record stands at 317.595 mph, set by Australian Ken Warby in 1978 and with speeds of this magnitude, it is very difficult to forecast just what is going to happen. Make a mistake and the boat will probably end up in a thousand pieces and the driver will probably be dead.

The statistics are daunting. Over three-quarters of the men who have attempted to break the world water speed record have died in the attempt. The history books are littered with famous names who have died in the two-way high speed runs required for the record – Sir Henry Seagrave, John Cobb, Donald Campbell, Lee Taylor and Craig Arfons – the list goes on. In all these tragedies the main cause of disaster has been the boat becoming unstable, either because of the aerodynamics or because the boat has hit a disturbance or debris in the water. Debris can only be avoided by carefully clearing the course before the record attempt, but there is no guarantee that more debris will not surface between the two runs. Getting perfectly calm water is equally difficult and most of the accidents on record runs have come from this problem. It is interesting to note that most accidents occur on the second run, suggesting that the quick turnaround required by the record rules does not leave enough time for the water to settle down.

The problems of record breaking is that you firstly need to have a boat that is both hydrodynamically and aerodynamically stable without any assistance from movable aerodynamic surfaces, which are forbidden by the rules, and preferably one which could accommodate very small disturbances on the water. At these very high speeds, there is virtually nothing the driver can do. Any change in the throttle setting or to the steering is only going to make things worse and more importantly, the driver’s reactions would be far too slow to even have a chance of correcting a problem if it arose.

You see this in circuit racing when a driver gets it wrong and the boat starts to lift at the bow. Drivers say that once they have discovered that the bow is lifting then it is too late to do anything about it. Too much air has got under the boat and the resulting aerodynamic lift is so great that there is no possibility of correction at this stage. This is a problem at speeds of 120 mph, so imagine what the problems might be when the speed rises to the 350 mph needed to break the current record.

One solution that could be developed is computer control. A computer could be programmed to sense the smallest difference in trim that could affect the boat, and the reaction time of the computer would be much faster than any human being could achieve. If you had the boat running on three or four computer controlled surfaces like flaps then the computer might be able to control things before they reached the level of catastrophe.

Even then, this would not be enough because the basic concept of record-breaking design is to make the craft both directionally and
longitudinally stable. So how about using the technique found in modern military aircraft?

The latest Euro-fighter is made purposefully unstable and is only able to fly by the computer making constant corrections to the control surfaces. The benefit of this is that the response to the controls is much faster so control is better.

Translate this into boat design and you could have a design that would be able to cope with very high speeds on the water by detecting problems almost before they started and the control response would be fast enough to meet trouble before it happened. Then, if you follow this line of thought, why not have the whole boat computer controlled so that you take the risk of killing the driver out of the equation? Unfortunately, the rules require a driver to be on board for the record run, but at least you could do all the trials in unmanned mode. 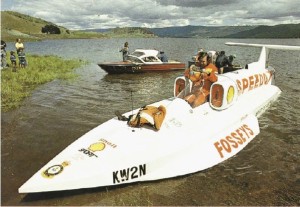 Ken Warby from Australia is the man who currently holds the world water speed record with a speed of 317.596 mph. This record was set following a series of Australian and then world records set between 1974 and 1978 in his jet boat, Spirit of Australia.

Warby is a typical Australian, brash, speaking his mind and very confident in what he is doing. He took highly qualified advice in developing his boat design, but on each side forward and one aft. The design was developed largely intuitively and Warby is highly critical of the designs of other record boats that reverse the concept by running on one point forward and two points aft, suggesting that this leads to instability.

This is where the arguments about record boat design start. There seems to be logic in riding on one point forward and two aft because it would seem the aerodynamic lift is much easier to control but there is the risk that if one sponson dips it will cause the boat to swerve. With the alternative configuration, there is a flat surface under the boat forward, which can generate aerodynamic lift just where you do not want it. Warby seems to have managed to control this lift in his design but is highly critical of a Swedish catamaran design, which he says would trap too much air under the hull. At least with a three pointer there is the chance for the air to escape out of the sides before it reaches the stern.

For over 35 years Warby has closely watched the activity of other teams who have set their sights on the record and a number of years ago even had a new boat already built and nearly ready to run. This one was still tiny at a little under 9m in length and a 9000hp gas turbine has been packed into the structure. Warby claims that he never used the full 6000hp of Spirit even though he reached 345 mph at one point, so the new boat should have more than enough power to reach 400mph. However, the boat has never been trialled in anger as no one has ever made a serious attempt on his record.

About 10 years ago there was a lot of talk about record breaking from both sides of the Atlantic. In America, Russ Wicks’ American Challenge talked up the record run, but it all came to nothing. The initial design looked more like a plane than a boat, with short stub wings to attach the rear sponsons to the main hull. Each sponson supported an angled fin designed to improve lateral stability and like most record boat designs, the huge air intakes for the turbine engine dominate the design.

The British Quicksilver project which was started in 1988 was based on a boat developed by Ken Norris who worked on the Bluebird designs years ago. Quicksilver was radically different from Bluebird, featuring a long, almost tubular centre hull with twin small sponsons at the stern. The tiny cockpit was dominated by the semi-circular air intake above it and this air intake feeds the 35,000hp Rolls Royce Spey gas turbine. This sort of power unit, coupled to the considerable size of this design, takes recordbreaking boats into new territory. The 13m Quicksilver was the largest water speed record boat ever built and there is no doubt that increasing the size of a record boat makes it easier to get good stability at high speeds. Quicksilver was the first record boat to use moveable control surfaces on the hull.

These contact points between the boat and the water would be constantly monitored and adjusted by computer and will give audible warning to the driver if certain parameters are exceeded. Are we perhaps looking at a pre-cursor to Emirate Team NZ’s foils? This is going some way down the route of a completely computer controlled boat for record breaking and this could be one way in which the technology of record breaking could feed back into everyday boats.

There is also the UK based K777, powered by a Bristol Siddeley Orpheus turbojet. The K777 hydroplane is based on Donald Campbell’s Bluebird K7 design and the Bluebird Project team, who are rebuilding the original Bluebird K7. The Bluebird Project aims to rebuild Bluebird K7 to its original glory, although its record breaking days are over. The K777 team entered the arena towards the end of 2011, and have a goal of 400 mph.

Belgian Daniel Dehaemers is well on with his World Water Speed Record challenger and is running a Rolls Royce Olympus engine with after burner, producing 40,000 pounds of thrust, in the boat he calls “Dartagnan SP600”. Dartagnan is the name he has used for his offshore boating activity and the significance of ‘SP600’ has still to be explained.

Australian Colin Johns is building a challenger called The Rush and it, like most projects, has been long in the build process. The current boat is 9.75m long and 2.4m wide and will be using a Westinghouse J34-WE48 which is expected to produce 6000lbs of thrust to power himself and his craft at over 300mph across the surface of the water.

Those daring people attempting to break the world water speed record maintain that the risks are acceptable and suggest that modern technology can minimise them. The problem is that there is virtually no experience of what might happen at 400 mph on the water and nobody knows just how accurate the computer simulations will be. Record breaking is a huge step into the unknown and the only way to find out for sure that a design is good enough is to get out there and try it and there are still men who are brave enough to do just that. Just like the America’s Cup sailors have had to do. Suck it and see – it’s the only way you’re going to know!