When the Auckland PBRO held this country’s first offshore power boat races of 40 and 100 miles in 1964, there were no specialized offshore race boats in existence. However, as the circuit expanded throughout the North and South Islands in the late 60s and early 70s, the first race boats began to appear: Ivan Boyce used a 7L Chev and a Casale V-drive in the Rex Henry-designed ‘Tara Too’. Bill Stevenson and John Meredith raced their triple Mercury outboard-powered ‘Mystic Miss’ and ‘Formula’ boats. Car racer Spencer ‘Spinner’ Black used a quad- Webber carburettored 5.4L Corvette engine with a Casale V-drive in the Plylite-built ‘Turtle’.

In the early 70s, North Shore boatbuilder Jim Mackay used a 5.7L Chev and a Casale V-drive in a hull he designed and built himself called ‘Fury’. Mackay had served his apprenticeship at Bailey’s in Auckland before starting his own business building everything from rowing skiffs, surf boats and yachts to launches. His earliest success came at the 1964 Tokyo Olympics when Earle Wells and Helmer Pedersen won a gold medal for New Zealand in the Flying Dutchman sailing dinghy class in a cold-moulded wood veneer boat built by Mackay.

Unfortunately, ‘Fury’ caught fire and sank off Rakino Island before it had been proven, but Spencer Black had noticed the meticulous workmanship and approached Mackay to build him a new hull. Spencer showed Jim a picture of a period USA Cigarette offshore racing boat and asked him if he could build something similar. The result was the first Mackay 8.23m ‘Old Crow’ and the start of the Mackay offshore racing dynasty. Mackay-built boats won the NZOPBA championship for five years from 1974 to 1978. Mackay crewed for Black in 1974, but there was a difference of opinion over the need for trim tabs. Mackay believed his hulls did not need them, and built a new boat, ‘Topaz’ to prove his point. 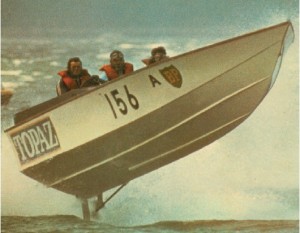 ‘Topaz’, launched in 1974, bearing ‘Fury’s former 147 race number, was very similar to ‘Old Crow’: a 8.23m 23o deep-V plywood hull, fibreglassed inside and out, and using a Casale marathon V-drive and a tunnel-rammed 7.4L Chev. There were differences in the strakes, and new technology allowed ‘Topaz’ to be lighter than ‘Old Crow’. However, the first season was dogged by niggling breakdowns.

In 1975, with new race number 156, and with engine builder Jim Carlisle, the team dominated and won the championship. Jim Mackay became the only New Zealander to design, build and race a boat to a championship win. Having made his point, Mackay in 1976 sold ‘Topaz’, along with the parts to build a 8.1L Chev engine, to Roger Wood. Wood campaigned the boat as ‘Paul Jones Bourbon’ and later as ‘Stars and Stripes’, on the North and South Island circuits until the early 1980s, after which he joined the catamaran revolution. A highlight of Wood’s ownership was the 1977 three-day Citizen Watch marathon from Tutukaka to Auckland. On the last leg from Stanmore Bay to Takapuna Beach, the boat suddenly and spectaculary barrel-rolled, throwing two of the three crew members into the water. The one remaining in the boat managed to pick the other two up and finish the race.

NB: Editor Barry Thompson had crewed in the first legs of the marathon in Paul Jones Bourbon and gave up his seat for the last leg to Auckland to Ho Gray, who had had a miserable run in his boat and looked like sitting out the last leg to Auckland. This turned out to be a very fortuitous move on Thompson’s part. He also ran in Topaz in a 6-hour marathon and spent a full lap of Auckland harbour sitting in the engine bay, holding a spark plug lead on, while being continuously zapped by the Joe Hunt Magneto.

Auckland engine builder Kevin Green next bought the hull in the early 80s, renaming her ‘Aurora’ and continuing to race in the offshore series. Meanwhile the Cook Strait and return record, known as the ‘BP Straits Cup’, captured his imagination as a true test for his engine building ability. He built a 7.9L Chevrolet with an [exotic for the time] Kinsler fuel injection system. After two attempts he and his crew of Des Deacon and Ned Rowe took the BP Straits Trophy with a time of one hour, 43 minutes and two seconds at an average speed of 69.6 miles per hour.

The 1984 deed of the BP Straits Cup decreed that the challenger must leave Wellington carrying a letter from the president of the Wellington Power Boat Club, and must, with no air support, cross to Picton (slowing to 5mph in the Picton Harbour), stopping at the wharf where the letter was to be handed to the mayor of Picton. The letter was to be signed by the Mayor to verify that the challenger abided by the speed limit within Picton Harbour, and the arrival time was to be noted. The journey would then be retraced to the finish in Wellington. Graeme Horne and Tony Banks lowered the record in 1994 to 1hr 41min in the twin 6.2L/600hp MerCruiser powered Fleetlease, a 9.75m Robson cat.

In 2012 Warren Lewis and Chris Hanley claimed the BP Straits Trophy in their twin MerCruiserpowered 10.7m Skater cat ‘Fairview’ with a time of one hour, 33 minutes and 19 seconds. However, ‘Fairview’ was given permission to turn at full speed in Picton Harbour before returning, without stopping, to Wellington Harbour. Green, who had initially sent a congratulatory email to the ‘Fairview’ crew, later became aware of the discrepancies between the challenges, and was most upset. Green is adamant that either the rules of the historic BP Straits Cup should be adhered to, or a completely new challenge should begin, leaving the original record standing.

Green later became involved in other projects, winning, with Graeme Sutherland, the 1981 World UIM Class 2 Championship in the triple-Mercury outboard-powered Scarab ‘Continental Airlines’. Later there was the twin MerCruiser inboard-powered Apache hull ‘Warlord’, which he still owns in the USA today.

Green sold ‘Aurora’ to Auckland marine enginebuilding legend Peter ‘Mudguard’ McGrath. Enter Muddy McGrath Although he was heavily involved in Peter Turner’s ‘Sleepyhead’ offshore racing team, McGrath still used ‘Aurora’ for the odd offshore race, poker runs and even fishing. The last time he raced it in the original V-drive form was in the late 80s Auckland to Tutukaka (and return) marathon. ‘Aurora’ with its deep-V was in its element. McGrath filled the ballast tank up and put his foot down, outpacing the cats in the rough water. Unfortunately an ill-placed finish line at Kaipara Harbour sent ‘Aurora’ into the wharf at speed, necessitating a rebuild.

When McGrath stripped Kevin Green’s old engine, the block, crank, rods, pistons and cylinder heads were all so badly cracked everything except the injection unit was dumped. McGrath had grown tired of the impractical aspects of the V-drive and experimented first with a Karma surface drive (which proved excellent in a straight line, but diabolical when trying to turn), then with a sterndrive. His final make-over comprised a supercharged 8.4L Chevrolet with a MerCruiser leg. McGrath was disappointed with the stern leg, noting that the V-drive had lifted the bow better.

By the early 2000s, McGrath was rigging Australian Bill Barrie-Cotter’s Maritimo offshore racing team, and New Zealand’s most famous bogan moved to Australia, regretfully putting ‘Aurora’ on the market. Mike Cameron purchased ‘Aurora’ to aquire the engine and leg for his copy of the Manville Brother’s ‘Musketeer’ that he successfully raced in the classic class of the offshore series.

Things looked grim for the famous old boat. The bare hull and rusty trailer were sold to a Hamilton buyer. Her deck was removed with the intention of converting the hull to a center- console fishing boat, with a Detroit diesel engine. However, the white knight of the story arrived in the form of Ian Reeves of Rotorua, a forestry contractor, and a very successful veteran waterski- and offshore-racer. Reeves had purchased a 5.8m Mackay hull around 1975, named it ‘Pathfinder’, and has raced it ever since. With his daughter Sharon he rebuilt it in 2010, and it is now immaculate with its twin turbo-charged big block Chevrolet. Reeves is possibly the longest continually involved competitor in the sport of powerboat racing in New Zealand and all his boats have had V-drives.

‘Aurora’ was soon back in the Reeves’ Rotorua workshop, and a huge restoration job began. The original V-drive was traced and purchased, and boat builder Danny Pearse began a full check and rebuild of the hull. Pearse’s credentials include a number of meticulously restored wooden launches still used in the Rotorua Lakes district. 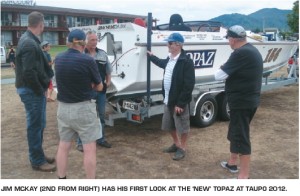 ‘Aurora’ uses the rudder from another Mackay hull that raced as ‘BOP Real Estate’/’Vantage’. Naturally, and with the blessing of Jim Mackay, the hull was re-christened ‘Topaz’, with the original signwriting replicated by Bear’s Signs in Gisborne. A Gale Banks twin turbocharged 8.2L Chevrolet now powers her to a top speed of 80 mph. Mackay is delighted with the quality of the ‘Topaz’ restoration, describing her as magnificent, and ‘better than new’. ‘Topaz’ is indeed a credit to Mackay and her subsequent owners and restorers. 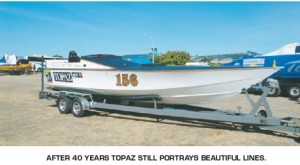 Forty years old this year, ‘Topaz’ can count some of the legends of powerboat racing amongst her present and former owners and drivers. She still turns heads with her classic lines, and these days races in selected NZ offshore races, but is most frequently heard and seen disturbing the late afternoon peace on Lake Rotorua.