Who would have thought that DIY kitset aluminium boatbuilding was a realistic option? Yet young Joshua Jones has proved that with the DIYNO 701, with no prior boatbuilding or even welding experience.

Think about home-built boats and how most of us tend to imagine either a relatively small dinghy style of vessel or one of those “front garden yachts” that appear to take forever (sometimes several decades) to complete. What we don’t generally think of is a 7 or 8m aluminium hardtop family fishing boat. Yet that is just what young Joshua Jones has recently built.

Joshua is one of those restless souls that like to keep busy. Needing a new project, he thought to build the DIYNO 701 for his father Peter, would be just the ticket. As well as giving him the necessary challenge, it would provide the enthusiastic father and son fishers with a boat far bigger and better than they could otherwise afford.

Things progressed reasonably quickly after Joshua found Jim Pauling’s Revolution Yachts on the Internet. Jim is one of those amazing Kiwis, who does a lot of things remarkably well, yet has virtually no profile at all. An incredibly versatile designer, Jim has drawn everything from aluminium powerboats and catamarans to offshore sailing cats, a mahogany runabout, a welded polyethylene flyfisher and composite deck cranes and motorhomes. Of particular interest to Joshua was his line of DIYNO 701 aluminium kitset boats. These come complete with a full set of CNC-cut panels and even the pre-cut pieces of timber for a jig on which to build a boat.

Jim, who has been offering kitsets for “8 or 9 years” and as so far sold around 50, says new manufacturing and welding technology is making the DIY boats a more realistic option for a wider range of reasonably “handy” people.

“One of the problems with DIY aluminium boats is that even very experienced welders struggle when there are gaps to fill between the panels,” he says. “However, modern CNC technology means the panels fit together perfectly with no gaps. “New single phase welders, with built-in electronic technology, also make it easy for first timers to get a good clean weld.”

Jim also has an experienced welder who offers a sort of Welding 101 course to those who buy the DIYNO kitsets. As well, both he and the welder are available throughout the build to answer questions, offer advice and help solve any problems that may arise. As anyone who has undertaken a major project will know, the adage that it “will take twice as long and cost twice as much” as planned is more often true than not. While that wasn’t exactly the case with Joshua’s DIYNO 701, Pretty Beaut, the build did take three years and involved what he admits was a pretty steep learning curve.

The result is rather striking. On its double axle trailer at the Waikawau boat ramp (on the western side of the Coromandel Peninsula), the maroon-coloured Pretty Beaut is: a) substantially bigger looking than its stated 7 m and b) more than a little too modestly named. Pretty Beaut looks really good.

The DIYNO 701 has a professional-looking finish, good balance between the hardtop and the rest of the boat and absolutely no signs at all of this being a “home build.”

Pretty Beaut’s impressive transom also catches the eye. The Joneses have installed a self-imported Mercruiser 200hp diesel inboard and then designed and built a special aluminium platform that provides places to stand on both sides and on top of the engine’s Bravo 3 leg. Peter says the economical diesel is ideal for game fishing. “On a recent trip, we went from Tairua out to the Aldermans, spent the day fishing and returned to the ramp having used just 54 litres of fuel.” 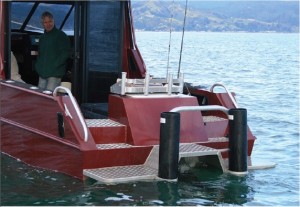 On board, that initial feeling that the 701 was a big volume boat is reinforced again. There is a big cabin, spacious “bridge” section under the hardtop and more than adequate cockpit. There is also a surprisingly small hatch in the fully lined cabin, way too tiny for anyone to climb through. Joshua explains: “We hardly ever need to go forward anyway and, when we do, we just use the side decks.” 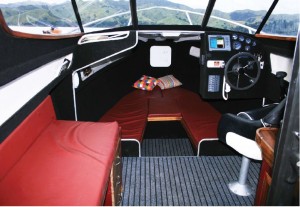 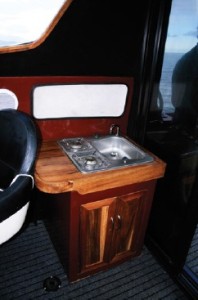 The cabin’s side pockets are big enough to accommodate fishing rods and the Joneses have used black Frontrunner on the sides and a lighter grey for the top to ensure the area is not too cave-like. There are two reasonable sized berths and a portable toilet under the centre squab. The DIYNO 701 has obviously been designed for guys who like to be on the water for more than just a couple of hours at a time. Behind the sole pedestal seat is a small galley with a stainless steel unit consisting of a two-burner stove and a sink (the latter linked to a 30-litre fresh water tank further forward). This unit sits on a timber cabinet that houses the gas bottle.

There is stowage in a three-drawer console and under the bench seat over on port. A hinge-up flap helps convert this seat into a third berth if required. Ventilation is provided by a large opening hatch above and Peter says that, with both this hatch and the small one in the cabin open, there is more than enough cooling airflow, even on the most windless days.

There are also handrails everywhere, a sure sign that the Jones are prepared to battle big seas in order to land those trophy fish.

The steering station features a Lowrance HDS7 MFD, instrumentation for the Mercruiser diesel, a BEP DC panel, Uniden VHF and control panels for the bilge pumps, spotlight and Quick windlass. There is also a stereo above and a huge amount of additional stowage in a variety of well-placed lockers.

The DIYNO 701 is protected by a triple sliding door that, when open, gives good access between the two areas. There are more well-positioned handrails at the front of the cockpit and a custom-built shade on the back of the hardtop. 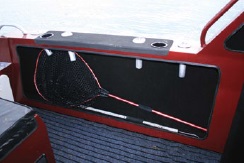 The beauty of building this DIYNO 701 is that you can decide exactly what type and size of lockers you want and where. Joshua and Peter have opted for two fairly conventional side lockers on starboard, with a single large one (big enough for their landing net) over on port.

They have also created a couple of handy small lockers (one per side) in the inside of the trailing edge of the cabintop. These are great for sunglasses, cellphones and the like: the sort of things you don’t need all the time but want to be handy for when you do need them. 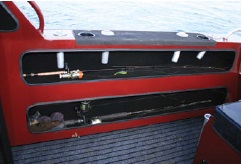 As with most inboard-powered cockpits, the engine box dominates this area. The Joneses have tried as much as possible to turn that into a positive, with a big cushioned pad covering the entire box. Above this, is baitboard, complete with rod holders. There are more rod holders, all set at deliberate angles, in each of the coamings. Add a brace of drink holders is set in among them.

There is a live bait tank under the starboard transom step and two tuna tubes grace the wide platform. To balance the extra weight of the inboard engine, Pretty Beaut’s fuel tank lives, launch-style, under the hardtop floor. It is also worth mentioning the upstand that the Joneses have added to the two side decks.

In rough weather, this prevents water from flowing back down the decks and into the cockpit. They are another example of the advantages of a custom boat, built by people who have spent a lot of time out on the water.

With a trailerable weight of 2500kgs and powered by a 200hp inboard diesel, one would not expect the DIYNO 701 to be a speedster and it is not. However, it is no slug, either. At WOT (3400rpm) on a fairly flat sea with very little wind, its top speed was reasonable 28.3 knots. Peter says 32 knots is the best they have seen.

While it was not possible to test Pretty Beaut’s rough water capabilities, Peter says they have experienced, with no problems, an unpleasant 1.5-metre chop and confused seas on a trip back from White Island. The fact that there are still no wipers on any of the three forward-facing windscreen panels possibly says it all.

In the conditions we had, the DIYNO 701 handled easily, planed without too much fuss, turned tightly without wanting to let go and was very comfortable. The only slight downside was when reversing reasonably sharply (as when backing down on a fish). Then that clever platform, which was so good in every other respect, proved to be just a little too low with a tendency to dig in. Not a problem as long as you are aware of it, but probably one of the few things the Joneses would change if they were to do it all again.

Since the Joneses bought their kitset, Jim has refined the process even more. Now, instead of being timber, the jig will be made from pre-cut pieces of aluminium. Once the jig is no longer required, the unit will be part of the kitset trailer.

“That means the DIY-er will start off by welding the jig/trailer instead of the boat, gaining experience and confidence along the way,” he says.