It’s more than a decade since the first Fleming F65 was built and now with more than 50 sold, it still ranks as one of the most popular passage makers of its size in the world. Barry Thompson went to Australia to revisit this timeless classic.

It is 11 years since I reviewed a Fleming 65 and remarked then that it was a very traditional pilothouse trawler that had been designed with experienced cruising in mind and had a layout that reflected that very function. While I would have considered that first boat to be as perfect as the builders could make it, it seems that what owners want is not always the same.

Fleming Yachts Duncan Cowie says that every boat is built to order, so no two are ever the same. “While we have two basic saloon layouts, for example, the owner of Maude Hess has changed the shape of the countertops, lounge layout, added more bookshelves, glass rack and entertainment system. The master cabin was also tweaked with a bulkhead moved aft so he could add a small sofa. Stepping up from a Fleming 55, he knew exactly what he wanted”.

Externally the Fleming 65’s are the same, but it’s inside that the changes are noticeable. Maude Hess is the 53rd F65 – the third F65 into Australia – to have been launched since hull one in 2005, Currently there are three more in build. Interestingly F65 #1, Venture, is still owned by company founder, Tony Fleming and recently clocked up 66,000nm. That’s just over three times around the planet. Indeed, a well-used passagemaker doing what he designed it for.

Tony Fleming says that his design philosophy was to create a refined and dependable cruising yacht, capable of taking her crew in comfort and safety to wherever they might wish to go. The selection of every item, from the shape of the hull to the choice of each piece of equipment, reflects this philosophy.

The layout of the Fleming 65 is very similar in concept to the F55, but the F65 is 70% larger in displacement and offers much more interior and deck space than her smaller sibling. A timeless classical pilothouse, the difference between the Fleming and many of its competitors, is the unquestionable dedication by the builders to achieve the highest standards possible in every boat that leaves the yard.

The Fleming 65 is a very traditional pilothouse trawler that has been designed with experienced cruising in mind and has a layout that reflects that very function. The pilothouse, therefore, provides for several opportunities from the conventional raised L-shaped port side settee with a swivelling table that swings out of the way to enable you to turn it into a pilot berth, to a Pullman fold-down or a slide-out canvas berth option.

The electronic package on all Flemings is optional and the choice of the owner. On this particular boat, the owner had chosen twin 24” Raymarine Axium XL screens plus the Fleming First Mate engine management system – standard on all Fleming Yachts – which can all be displayed on a large touch screen. There is generous dash space for a vast array of navigational and control systems both on the panels and overhead. A single Stidd helm seat is standard, but there is space to accommodate a second optional seat.

There are access doors either side to the Portuguese Bridge, a day head area to starboard that often incorporates a wet locker. The small ship feel is exemplified in the teak interior and teak and holly sole that are used throughout the boat. The Fleming 65 is a low-profile pilothouse design and hence the stairways to the forward accommodation area, flybridge and aft saloon are short and not overly steep, as are those in some boats of this style. There are plenty of handholds and shallow treads on the steps, making access easy. Bi-fold doors at the rear of the pilothouse are neatly stowed back into an own cavity, so they don’t diminish the saloon companionway beam. Close these, and you have two individual zones that separate the guests when you need to. Cocktails in the pilothouse with guests, while the kids are watching TV in the saloon, sounds just perfect!

The galley has granite countertops with loads of storage, a double sink, induction cooktop, a Miele conventional oven, convection microwave and a trash bin. Again, how you equip the galley is your choice, with an F&P dish drawer and a trash compactor a common option. Opposite is the pantry area with more storage, dish lockers and space for a built-in coffee machine.

There is a spacious and homely feel to the saloon that is available in various arrangements aft of the galley. The boat reviewed had a settee and coffee table to port and a solidly fixed dining table to starboard. Two swivel barrel chairs with ottomans provide additional flexible seating. Aft, there is a drinks fridge and wet bar with stainless steel sink set into the granite countertop with overhead storage for glasses. Large side windows offer a panoramic view from the saloon.

Access to the forward accommodation area is either from the pilothouse, or the saloon, depending on what layout you choose. The Fleming 65 has several options which, while all being three cabins, have a very varied mix of berths and also offer both two and three ensuite alternatives. This includes the recently introduced a full-beam master aft which is only available with the pilothouse entry.

Currently, Fleming has two F65s in build, and both have the full-beam master option. It’s your choice entirely as to what you prefer. The port-side cabin comes either as a large ensuite double or with two generous singles, and the starboard cabin is available with twin cross-over or stacked berths.

Like all the cabins in a Fleming, there is independent climate-controlled air conditioning, LED lighting, CO & Smoke detectors, Manship ports, teak and holly soles and plenty of storage space.

A compact laundry is neatly hidden away on the starboard side of the companionway with a Miele vented dryer and washer. A forward master stateroom was chosen by the owner of Maude Hess and features a central island queen-size berth with storage underneath that is easily accessed, thanks to a hydraulic ram that raises the bed base. A neat feature is a fact that the bed can be manually slid aft away from the
forward bulkhead to make it a lot easier when changing the sheets.

The ensuites are beautifully finished with Marble in the shower stalls and a solid surface vanity tops, with heated towel rails, and some of the best stainless work I have seen for some time.

Just like the interior of the Fleming 65, the outside has also come in for the same sense of purpose when it comes to finishing. Solid teak flooring is used throughout, from the cockpit, through the wide walk-around decks to the forepeak. LED lighting and handholds are strategically placed, so they are where they need to be when required, with high bulwarks and the Portuguese Bridge providing additional safety. The interior of Maude Hess is all hand rubbed satin Teak which gives a warm, smooth matt finish with Arcadia raised panelling.

The roomy cockpit is well equipped for stern docking, with a separate console housing engine and thruster controls, plus there are warping winches mounted either side. A central transom door leads to the full-width boarding platform, which is finished in either genuine or faux teak. Access to the engine room and lazarette is via a lockable hatch aft of the saloon doors and to the flybridge from either the pilothouse or by a ladder from the cockpit.

Sure to be a popular area when cruising in the right weather is the open flybridge. The raised helm to port has an electronics console that is big enough to handle a double-up of just about everything in the pilothouse. There is a U-shaped settee opposite, with a fixed table, and an optional BBQ and custom freezer can be substituted for seating on the port side behind the helm. The RIB tender is stowed on the upper deck, with a Steelhead 1500 crane used for launching and retrieval. There is also a secondary upper helm and control station to assist when docking.

Overhead, the radar arch provides a secure, and solid mount for the variety of antennas, lights and domes, plus you have the option of a full fibreglass hardtop with clears or a soft bimini.

It has been said that to say that a Fleming is well-engineered is a vast understatement and I certainly have to agree. From the lighting to the seacocks, every aspect of the equipment and engineering fit-out of the vessel is exceptional.

Naturally, there has been huge importance put on the fuel system, with twin Racor filters, fuel polishing and a fuel transfer management system that looks after the fuel from four fibreglass fuel tanks with a total capacity of nearly 6500 litres.

The F65 is equipped with the Seatorque bolt-on shaft system, which is now standard on all Flemings. Called, The Boss, it is an enclosed driveline system with thrust bearing complete from the transmission to the propeller.

Fleming hulls are hand-laid GRP reinforced by an interlocking matrix of frames and full-length box-section stringers for maximum strength and stiffness. The superstructure and decks are built using cored material to save weight. Underneath, the Fleming 65 has a full-length keel that extends well below the rudders and propellers. The keel is filled with closed-cell foam and isolated from the hull to prevent water intrusion in the rare case of a severe impact.

The Fleming 65 hull is a semi-displacement design with moderate deadrise, a fine entry forward and a hard chined, modified vee aft. It is designed to run most efficiently at 9 to 10 knots. And, as has been proven many times, will take you anywhere in the world in safety, comfort and style. 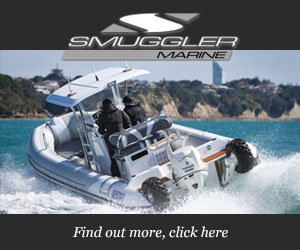