When Bill Barry-Cotter launched the first Maritimo, an 18.3m (60ft) model, in 2004, he made a statement that the company would release a new model every year for the next few years. The Maritimo 48 fulfils that promise for 2006, following on from the Maritimo 52 in 2005.

Sanctuary Cove was chosen to unveil the Maritimo 48 and instantly it proved a winner. With 40 deposits paid even before the show opened, this is a boat that is destined to make a serious impact in the market and has all the attributes of becoming an iconic model for Maritimo.

The success of the Maritimo 60 and the Maritimo 52 gave this new company a huge boost and confidence to hit the market hard and fast. While some builders talk about what they have planned, the Maritimo team goes ahead and does it – and does it well.

Dreams that are turned into reality almost overnight, reflect the passion and desires of owner Bill Barry-Cotter and have found willing buyers who obviously share those same dreams. While the larger, but strikingly similar 60 and 52 cater for a more affluent sector of the market, the 48 was developed to introduce another Maritimo that is both less expensive and more compact. In fact, the Maritimo 48 is around $Aus295,000 cheaper than the Maritimo 52.

To achieve this, the company took a Maritimo 52 hull and simply cut 1.2m (4ft) out of the centre. The major changes are a 600mm (2ft) shorter cockpit and about the same amount sliced out of the saloon/galley area. The differences are noticeable when there’s a 52 right alongside, but they certainly don’t impact adversely on the overall look and layout of the smaller model.

Maritimo has maintained the status quo as far as forward accommodation is concerned. The 48 is a three-cabin boat and like the rest of the layout there are no cabin options. With production geared at a boat every 10 days, there is no time for customising the interior, apart from fittings and appointments and a few standard option packages available from the factory.

The forward guest cabin has a large island berth with access below to the bow-thruster. There is a two-way shower/head, which is shared by the guests in the starboard cabin. Good bathroom design is all about practical solutions with aesthetic considerations and in the Maritimo 48 both have been harmoniously catered for. The timber vanity is complete with an above counter glass bowl, with a glass divider between the head and large shower box. There are generous storage areas, in side lockers and under the bed, which are easily accessed from either side of the bed. The blue forward bulkhead is colour matched to the throw cushions on the bed and a 2.3kW (8000 BTU/h) air conditioning system allows you to individually control the temperature in the cabin.

The starboard guest cabin has under and over single bunks, a full height locker and like all cabins individual air conditioning. This is also where the combo washer/dryer is kept.

The main stateroom has a queen size island berth with sprung mattress and lifts to reveal large hanging and storage areas. Concealed lighting and individual berth lights provide the right ambience to this spacious stateroom. The owner’s ensuite is similar in most aspects to one used by the guests. The contemporary style blends with the classic look of the tongue and groove ceiling panel, moulded tile sole and the classic relief of either teak or myrtle woodwork.

In Maritimo 48 #1, high gloss finished South American myrtle timber is used throughout the accommodation areas and continues through all internal spaces. There is the option of teak and either can be finished in satin or gloss. The dark rich hue of the timber is accentuated by the soothing lighter shades of the ultra suede (vinyl option) wall coverings that provide an ambient mood throughout.

Maritimo calls the main saloon the wheelhouse in the 48 and while the first boat was not fitted with a lower helm station there is provision made for it. There is a framed glass-opening door alongside which leads to the starboard side deck and is a great bonus when you are docking the boat from below.

The interior could best be described as contemporary modern, with an understated decor that faithfully duplicates the unique craftsmanship that goes into all Maritimos. The open plan layout gives a feeling of space and at first glance it’s hard to see where the 600mm was taken out.

The dinette table provides seating for six to eight with the addition of a couple of occasional chairs and can be folded in half when used as a coffee table. To port is a large L-shaped leather settee, with the entertainment centre, wet bar in polished timber and icemaker conveniently built in under the internal staircase to the flybridge. A 7kW (24000 BTU/h) air conditioning system controls the temperature levels in this very open and expansive area and there are the usual overhead and concealed lights strategically placed. The galley, with its poly-warble bench top, is not large, but very effective, with a two-door fridge / freezer, F&P dish drawer, 4-burner cook top and microwave. There’s enough space for a generous-size pantry as well as drawers for plates, cutlery etc. The step-down aft galley concept allows the servery to be lower and not intrude on the natural flow-through of the sight lines from the internal helm to the transom.

A framed double sliding glass door leads through to the cockpit. This has the added bonus of being able to be opened either side, in favour of either the galley or the main cabin, or can be locked centrally so there’s access from both sides.

The cockpit has recessed toe kicks, deep fender storage and a central island entertainment centre, which incorporates a eutectic freezer, tackle lockers, sink and cockpit shower. An optional BBQ can be fitted. It’s an open, uncluttered area that is multi-purpose in its design – great for fishing, entertaining or just relaxing with a good book in some quiet secluded bay. An internal staircase provides access to the enclosed bridge, which in the Maritimo 48 is available in two variants, Sports Bridge (boat #1) or Cruising Bridge. The basic difference is that the Cruising Bridge has the helm further forward with a large lounger and dinette area aft and follows the same concept as the 60 and 52. The Sports Bridge has the two helm chairs aft and a forward L-shaped settee, which converts to another double berth by lowering the table and lounge upholstery.

Since the first Maritimo 60 and the 52 were launched there has been some comment about the external lines of the flying bridge. Addressing this, Maritimo has totally redesigned the hardtop, which is now offered as the sports hardtop on all models. However, the original enclosed hardtop design has been retained as the cruising version.

The flybridge area is enclosed on four sides with sliding side windows and a double sliding rear glass door onto a large upper deck. The helm station is minimalist in design, a trend that is fast catching on and provides three flat panelled areas for large screens and the least number of extra gauges, switches and controls. This is the sort of modern approach being taken by many designers who see the benefits of large multi purpose screens, rather than banks of instruments. With the downsizing of the Maritimo 52, the flybridge also fell victim, with a 600mm reduction in overall length. While the 60 had a walk-though centre screen, the 48 is offered with a central hopper-window as an option.

With the Maritimo 60 capturing the 2005 Cruiser of the Year and all-round Australian Boat of the Year for 2005, the Maritimo 48 could well be destined for the same gracious accolades. Formed in 2002, Maritimo is arguably the fastest growing cruiser company in Australasia and production levels have risen dramatically in just a few years. Targets for the 2006-07 year are for three 48s, two 52s and one 60 per month, or 72 boats a year. With new models already under development and the opening of a huge new facility at Coomera, Maritimo could very easily see that figure double within a few years.

In a media press release at the launching of the Maritimo 48, Maritimo’s marketing manager said “Now with the Australian dollar in a healthy state, allied with Bill Barry-Cotter’s vast knowledge and undeniable skills, we’re buying better, improving our production schedules and the new 48, I believe, will set the cat among the proverbial pigeons.” How right he is! 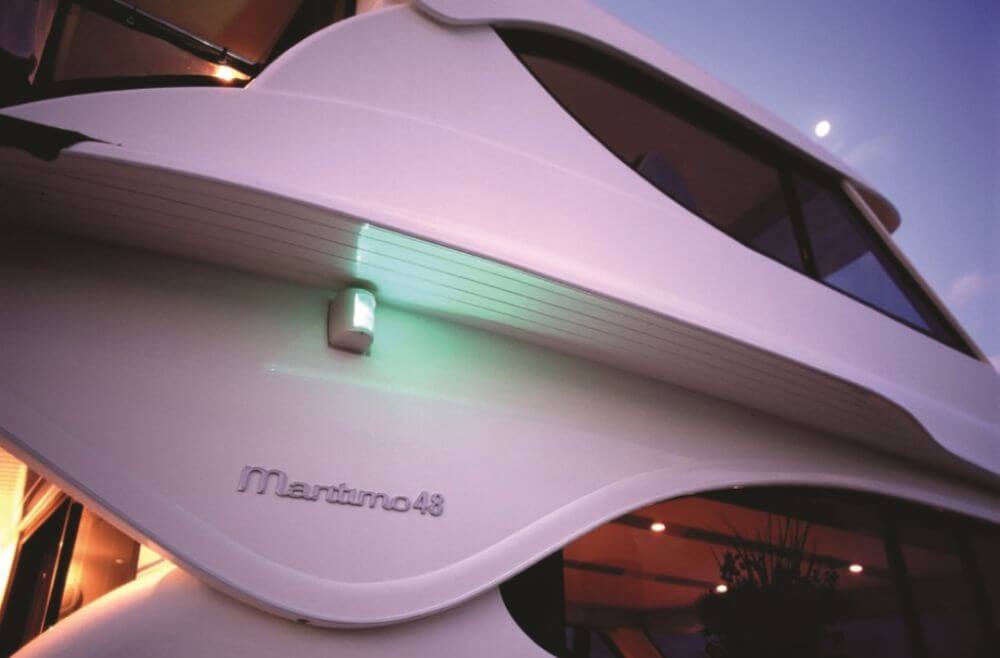