In Part 2 of our three part series about power on board, we look at inverter/chargers, how they work and suggest what might suit your needs.

Inverters convert the 12V or 24V DC energy stored in your batteries into household 240V AC electricity to run standard business and household appliances, televisions and tools when shore power is not available, or when running a generator is impractical or inappropriate. 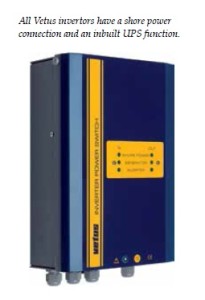 Inverters convert the DC energy by electronically increasing the voltage roughly tenfold from 24VDC or twenty times from 12VDC, and by changing direct current into alternating current. So why not use a generator to do this instead?

While both inverters and gensets (generators) create 240V AC electricity, inverters are better for variable demand and loads up to 2,000 to 3,000 watts. Unlike noisy, fossil fuel-driven gensets, inverters are silent, require virtually no maintenance, and are easy to install. On the other hand, their effectiveness is limited by your battery capacity.

Gensets are better for large, continuous loads like air conditioning, heating, and cooking. If your 240V energy requirements exceed 2,000 watt-hours per day, a genset is probably indicated.

Another option is to use an inverter/charger with a genset. The genset is operated during meal times, and other high-load times, during which it recharges the house batteries using the inverter’s battery charger. During off-peak times, the inverter takes over, silently supplying power for smaller loads.

How Big Should My Inverter Be?

Inverters range from tiny 100W models, good for laptops, to 4,000W models that can run electric galleys and refrigeration systems. The size you select is governed by the maximum power needed at one time or the capacity of the house battery bank. A computer (100W), TV (80W), and microwave (800W ~ 1200W) all running at the same time will need an inverter that delivers more than 1400W of continuous power. Inverters typically fall into three categories:

Portable inverters, generally connect to your DC electrical system using the common “cigarette lighter socket”. These DC sockets are often restricted by their current rating, poor plug contact or insufficient gauge wire constricting the flow of current and contributing to DC voltage drop at the socket.

Portable Inverters are instant gratification products: just plug ’em in, and start using their modest AC outputs (typically up to 300 watts). Ideal for laptops, small lights and tools. AC appliances are plugged into the front of the inverter. Portable inverters are also excellent for family trips in the minivan or SUV.

Permanent-mount inverters (400 watts or more) are hardwired directly to the battery bank. Inverters in this range usually have receptacles for appliances to plug into, but do not integrate with your boat’s existing AC wiring. Some allow you to easily wire more receptacles in remote locations. Top-of-the-line models include built-in transfer switches enabling full integration with existing AC wiring.

Inverter/chargers should be professionally installed because they draw a lot of amps, with the potential for dangerous shorts and electrical fires if they’re wired inadequately. They become an integral part of your boat’s electrical system and can rapidly replenish battery banks in the 400-800Ah range. We find that many trawler owners are drifting away from a large diesel generator, and are instead installing a large inverter/charger for their AC loads complemented by propane ranges and DC refrigeration systems.

What To Look For

Wave form: inverters today generally produce one of two types of AC power: Modified Sine Wave (MSW) or Pure Sine Wave (PSW). Affordable MSW inverters are the most popular type, and work well with common appliances you are likely to use. PSW inverters are more expensive, but will run all AC loads, and are best for stereos, computers and other sensitive electronics.

Portable tool chargers, light dimmers, variable speed tools, plasma screens, home theatre sound systems and certain other items may not perform as well with MSW. MSW inverters are prone to electronic noise known as harmonic distortion, which can cause disturbances in some electronic circuits. Modified sine wave may have only one step per cycle. 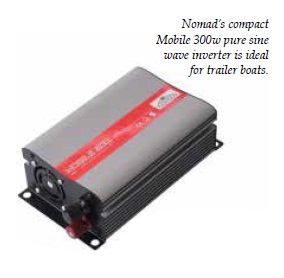 A good pure sine wave inverter can have as many as 1,333 steps per cycle and have a total harmonic distortion (THD) of less than 5%, typically around 2%.

Remote controls: Being able to control, monitor at-a-glance and program your inverter from inside the cabin is an important consideration, especially when the inverter is in a hard-to-reach place. Remote panels are a “musthave” for inverter chargers.

Powerful surge capability: An inverter must be powerful enough to handle the “surge” or starting requirements of appliances. A 125 watt TV might need 625 watts for a few seconds when starting cold. If you are using an inverter without the adequate surge capability, it won’t start the appliance.

Use common sense here, but always err on the side of the inverter. After all, nobody wants to have to remember to turn off the entertainment centre when using the microwave to pop the popcorn! If there is any possibility of the loads running concurrently, include both in your calculations.” 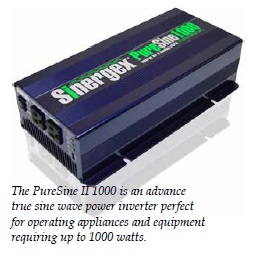 Low electrical interference: High-frequency inverters frequently produce some EMI, or electromagnetic interference. This can cause problems with SSB and Ham reception and weather fax reception. However, many of the newer designs, especially true sine wave inverters, are meeting FCC Class A requirements so there is great improvement in this area. Of course, a simple solution to the problem of radio interference is to turn off your inverter.

How Much Battery Capacity Will I Need?

Design Rule: To be effective, we recommend inverters have access to a battery bank that is 20% as large in amp-hours as the inverter size in watts. This means a 1000-watt inverter should be supported by at least 200Ah of battery capacity.

The rationale behind this rule is that inverters use about 100Ah of electricity for every 1,000-watthours of use. So if a 1000 watt-hour were used at its maximum capacity for an hour, it would consume 100Ah. This would discharge a 200Ah battery by 50% if it started out fully charged. This is a recommended minimum: as usual, more battery capacity is better.

Calculating electrical loads: Many appliances and electronics have their wattage on a back panel. If only the amp rating is provided, use the following conversion formula: Volts x Amps = Watts. For each appliance, its wattage, multiplied by hours run per day, divided by 10 will approximate the number of amp-hours consumed from your batteries. 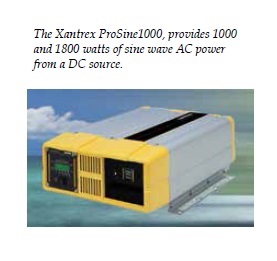 If an inverter is going to run a 500-watt load, it will draw around 50A DC. The math behind this rule is as follows: 500-watts AC ÷ 85% efficiency ÷12.5V = 47A DC. Keep two things in mind: 500W is not very much power (think about a small cabin heater that draws 1500W or a large hair dryer that draws 1000W); and 50A is a heck of a lot of DC current use. Not many DC loads on boats 40’ and under would draw 50A or more for more than a few minutes. Therefore, an inverter frequently becomes the largest DC load on most boats, and may require substantial changes in the battery capacity and wiring of the boat in which it is installed.

We recommend installing a fixed-mount inverter no more than 3m from the battery bank, to avoid a voltage drop or extra large cables. Inverters are not ignition protected, so are not safe for installation in gasoline engine compartments, but can be installed in a diesel engine space. In general, you should pick a location that is cool, dry, well ventilated and safe from explosive gasses produced by batteries, engines and fuels.

All about Inverters Efficiency

Inverter efficiency is a rating of how much of the DC energy gets converted into usable AC power, ranging from about 85% to 95%, with 90% being about average.

Efficiency ratings often are created using a resistive load (basically something like a light bulb or electric heater). When running loads such as motors, we split efficiency into two parts, the efficiency of the inverter we
mentioned above, and the efficiency of the waveform. Waveform efficiency means that most motors and many electronic appliances run better and use less power with a pure sine wave. Typically, an electric motor (such as a pump or refrigerator) will consume from 15% to 20% more power with a modified sine wave than with a true sine wave. When choosing an inverter based on efficiency, you should also consider the type of appliances you’ll most often be running.

The charger in an inverter/charger presents a large, inductive load for a small generator (under 8kW). Chargers with a high “power factor” are desirable because they are less sensitive to peak voltage and need less AC power. It is usually accepted that a generator be sized at 2.5 times the power draw of the charger. 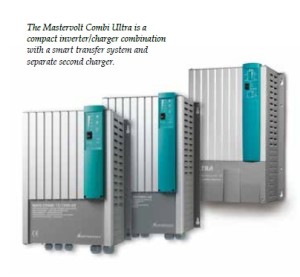 Inverter/Chargers such as the Mastervolt Mass Combi and Combi Ultra have high efficiency chargers with virtually unity power factor so there is no need to oversize a generator.

A Word On Inverter Wattage Rating

Not all manufacturers use a wattage rating to describe the output capability of the inverter. Some use Volt/Amps ~ VA.

To convert VA to Wattage, one must multiply the VA by the powerfactor ~ PF of the inverter. Typically, this could be 0.85

FISHING FROM A PWC

BE CAREFUL WHAT YOU DREAM