Sir Richard Branson’s great nautical feat took place in 1986, when he crossed the Atlantic aboard the Virgin Atlantic Challenger II in just over three days.

Branson thought that breaking the Atlantic record would be an effective global advertising campaign for his company. His first attempt was in 1985, setting sail from New York aboard Challenger I, but the vessel sank just 120 miles from the finish line at the Bishops Rock lighthouse.

He wasted no time in preparing for his second attempt at the Atlantic, with the Virgin Atlantic Challenger II, twelve months later. The new ship crossed more than 3,000 miles across the North Atlantic at full throttle, cutting through fog with the threat of icebergs and a storm astern. 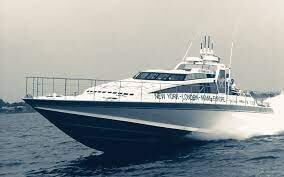 Finally, she made it across the ocean in three days, 8 hours and 31 minutes, two hours less than the record set in 1952 by the SS United States.

He never received the Blue Riband Transatlantic Challenge, a trophy awarded to the ship that spends the least time crossing the Atlantic, having broken two of the rules: stopping to refuel and using a boat that was not for commercial purposes. After conquering the Atlantic record, the boat passed through different hands. It was bought by a sultan and later acquired by another owner who sailed with him on the Mediterranean. In 2013, she was found on a dry dock where the yacht spent seven years on land, until she was bought in a semi-abandoned state by an English businessman who took it to Plymouth after paying 290,000 euros. Today, 35 years later, she continues to sail from time to time through the waters of South West England with her 4,000 horsepower.

YOURS FOR $US4 MILLION A WEEK

TYPHOON 19 HAS THE WOW FACTOR