While Kiwi-Kraft has been the well known brand name  of rigid pontoon alloy boat builder Kiwi Engineering  & Marine Ltd for 25 years, it was only when Rodney  Harris, managing director and founder, saw a need for a  strategy to break into the Australian market that the Aqualine brand was introduced. “Selling a boat in Australia with the  name Kiwi doesn’t go over well with a lot of Australian buyers,  so we thought the easiest thing to do was to change the name  to something more generic”, said Harris. The Aqualine range  is identical to Kiwi-Kraft, except for a number of new models  introduced recently. It is a move that has certainly paid off,  with sales to Australia over recent years steady and increasing.  “Our market is quite broad and even includes an 11m custom  boat to Darwin, plus quite a number of smaller boats sold in  North Queensland and Victoria”, added Harris.

However, it seems that Aqualine boats are not just destined  for Australia anymore, as the company has appointed a sole  North Island dealer, Boat City Paraparaumu, and now sells  the brand direct from its factory in Invercargill. Harris has stated that he has no intention of becoming a mass  producer of boats – he enjoys the one-on-one interaction  with his dealers and boat owners that small-scale production  allows. This also leads to a high level of customisation and as  he often says, “If you can dream it we can build it.” There’s probably no more beautiful and picturesque a venue  to test a boat than Queenstown’s Lake Wakatipu. It is some time since I have been on the lake and its appeal for me  is undiminished. Although it was raining heavily when I  arrived, the old adage of “two seasons in one day” played  true, with brilliant sunshine breaking through the grey  clouds on various occasions. Fortunately, we were able to get  some great photos in Bob’s Cove.

The cove was a campsite for Maori on the greenstone /  pounamu trail to the head of the lake. In the 1870s, seven  lime kilns were built there to burn limestone for building  mortar and agricultural fertilizer and a very derelict wharf,  which we used for our photo shoot, still remains. One intact  kiln can still be seen alongside the track.

Testing the boat on the mirror smooth waters of Lake  Wakatipu didn’t give me any indication as to how the boat  would perform in the rougher water. However, from my past  experiences with Kiwi-Kraft boats and talking to owners of  similar sized Kiwi Kraft boats, the ride and performance in  moderate to rough water is exceptional.

The underwater hull shape is very traditional, with a fine  entry, 20° deep V at the transom and two strakes either side.  There is the added benefit of very wide tubes that act not  only as stabilisers, but trap air and provide both extra lift  and softness of ride. 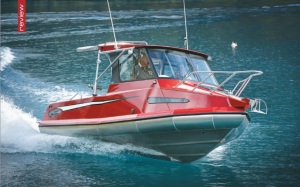 Kiwi Engineering uses its own aluminium boat technology,  called Kiwi Hushtec, that incorporates a variable deadrise  hull coupled to the cushioning pontoons. This, according to  Rodney Harris, is to increase straightline speed and improve  manoeuvrability and all-round handling in any conditions.

The Aqualine 645 is available in single or twin outboard, or  single diesel or petrol sterndrive or waterjet. Our test boat  was the first with a MerCruiser Diesel TDI 3-litre V6, a 265hp  common rail diesel engine that is a mini power house. I have  now tested a few boats with the TDI V6 and what a great  little engine it is. It’s compact, runs smoothly and provides  a solid power curve right through the rpm range. What’s  nice about the V6 configuration is that it compacts nicely  into the rear of the cockpit and the engine box is far from  obtrusive. It doubles generally as another seat or is also great  as a bait prep area.

It was interesting that on the mirror smooth water, with the  throttle wide open and the rev counter touching 4200 rpm,  the speedo hovered around 38.5 knots. On the way back to  Frankton Arm after our photo shoot in Bob’s Cove, with 10  knots of breeze right on the bow and a very slight ‘jobble’ on  the lake surface, the speed increased to closer to 40 knots for the same rpm. Clear indication of how the air entrapment  works to provide extra lift.

I was very impressed with the quick acceleration from an  idle speed start, and you really feel the ‘kick’ when the  turbo comes in at around 2000 rpm. The 645 runs from 0  to 15knots and on the plane in just a touch over 5 seconds.  A nice cruising speed on the lake was almost 28 knots @3000rpm, with the TDI 3-litre using 28L/h for just on 1.0L/NM.

When you see the optional pot hauler on the side of the boat it’s reasonably safe to assume that the owner is into  his fishing/diving and that the layout would reflect that.  However, while there are obvious signs of a serious fishing  machine, the cabin and wheelhouse area has been finished  to a high standard of comfort and one would expect that  staying away overnight wouldn’t be a hardship. 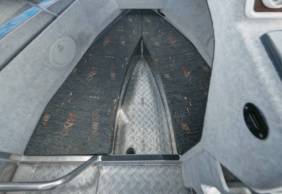 Forward is the large cabin with the standard single berths either side, with a cushion infill to form one large double.

There’s storage under the squabs, in side trays and in covered  side pockets built into the pontoons. The cabin is all lined in  a soft grey fabric so apart from the chequer-plate sole and  squab bases, there is no alloy panelling visible. You could  always cover this with carpet if you wished. Overhead, a  large deck hatch allows some access to the foredeck, but  also provides a natural air flow and light for the cabin.  Should any water find its way into this area, the cabin sole  is self draining.

There’s a bulkhead to starboard for the helm, but the layout is completely open to port so the flow though is uninterrupted and blends the two areas together well. The wheelhouse in our boat was complete with a rear opening door, but you  do have the choice of leaving this completely open.

The wheelhouse seating is reasonably simple with a pair of  single swivelling buckets on storage bases. However, you can  really change things around here and add a galley unit and  even a small fridge if you want more overnighting functions  built-in.

I liked the look of the white instrument cluster and  diagnostic panel on the raised facia and the positioning of  the Lowrance HDS8 GPS/plotter. Overhead there was a GME  VHF. The driving position is fine either seated or standing,  with more than enough headroom for taller boaters. Auto  anchor allows you to do all the anchoring tasks from the  comfort of the wheelhouse. Sliding side windows let in extra  ventilation. 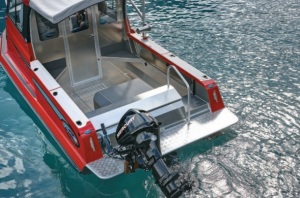 The 1.72m cockpit is plenty large enough to fish four  people without getting in each other’s way. The overhead  soft bimini slides out over the forward area of the cockpit  when you are looking for some shade or weather protection  and slides back out of the way if you’ve got some serious fishing going on.

The standard package includes five deck-mounted rod holders in the wide, flat coamings, a full-width boarding  platform with telescopic ladder and auxiliary outboard  bracket and step-through transom with drop-down door and  conveniently placed handrail. There are a couple of small auxiliary seats forward and the  engine box also doubles as a great seating space. 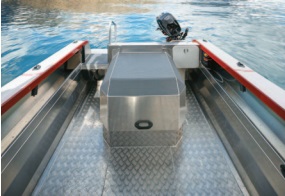 Storage shelves either side take care of a lot of your fishing gear, plus there is limited storage in the transom, either side of the engine box. Again, this is a space that you can personalise with things like a live bait tanks and extra seating. Under the chequer plate sole is a 260-litre fuel tank and an optional kill tank.

No matter what you want to call it, Kiwi Kraft or Aqualine, the 645 is a great boat for anyone looking for a rigid pontoon boat of this size. Designer Rodney Harris has certainly got it right with the 645 and I especially liked the intelligent layout and overall finish of the boat. As one of New Zealand’s longest established builders of pontoon boats, Harris and his team certainly know what they are doing and their Aqualine 645 is a perfect example of their workmanship.

Plus the bonus of an alloy boat like this, is if you want to change something from the standard layout to suit your needs, then it can be done a lot easier and much less expensively than with a stock GRP boat. Plus, I think you will agree, when photographed in the right light in the right location by an internationally recognised photographer, it’s a damn good looking boat as well.

Summerland 40 – Changing for the Better