RIBs have for quite a few years been very much mainstream when it comes to production trailer boats and there are now plenty of options to pick from. Through the 70s and 80s, the choices were very, very limited and RIBs over 6m were few and far between. However, if I was to make a list today it would very substantial, with offerings from such places as France, South Africa, USA, Australia, China and Ukraine. New Zealand too has a number of companies building RIBs for a reasonably buoyant local market, and some are even exporting.

One of those is Explorer NZ, which manufactures a wide range of RIBs from 2.9m to 8.3m. The company also specifically designs and builds RIBs within the weight and size constraints of specific yachts’ tender systems.

The 6.5m Explorer 6000 Blue Water is part of a family of four models that make up the 6000 Series Blue Water range, the others being smaller 6.0m and 6.3m and a larger 6.8m. All share the same well-proven GRP hull, which utilises a sliding plug at the transom end of the mould. The only real difference in layout and design between the four models is the available space. Also, maximum horsepower ratings increase as the boats get bigger.

The hull has four longitudinal timber stringers, with a fibreglass over plywood sole. The tubes are the heavier grade 866 grade Hypalon, which is tougher and stronger than the more common 828 grade. The tubes are joined to the hull through the conventional method of adhesively bonding the tubes to an outer GRP flange.

All models are available in four different variants, console waterjet, console sterndrive, console outboard and open tiller-steer outboard. There are some variations on those also, with the console available at two different heights, one designed more for stand up driving, the other seated. Our test boat had the higher version that I found to be a perfect height for both seated and stand-up driving. 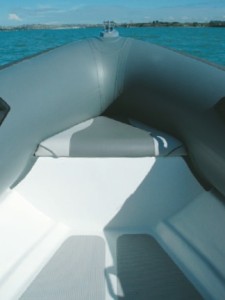 There is also ample space on the console for a 12” MFD, plus all the necessary displays for engine functions and controls. I particularly liked the dedicated glove box for keys, cellphone, sunnies, wallet, etc., something that so many boat builders forget to include. There are some seating options, with either a double moulded bin base with cushion seat and storage under or a pair of twin swivelling pedestal seats. You could set this up as a fully functioning fridge/freezer or simply drop in the right sized chilly/esky bin.

Our boat came with twin rear jump seats, one either side of the outboard, as well as a small bow seat over the anchor locker. Overall, it had seating for seven. Storage throughout the Explorer 6000 Blue Water is reasonably good for a RIB and most available spaces have been well utilised. Dry storage lockers can be found in the console and under the forward facing console bench seat. There are also wet lockers in the cockpit sole, fore and aft and within the transom. 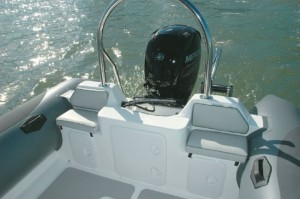 Although the standard anchoring system on the Explorer 6000 Blue Water is a GRP fairlead glued onto the tube, the company makes provision during the build process to retrofit a stainless steel post and anchor capstan just aft of the bow seat.

With the outboard version you will find a small boarding platform either side of the engine. In the inboard version these are replaced with a full tube to tube platform with drop-down ladder. The cockpit sole is finished with anti-skid rubber panels and is either self-draining into a lower sump and auto bilge pump or through large scuppers in the transom.

Overhead is a very robust stainless frame bimini, with fabric top and optional drop-down clears to complete the overall protection from the weather. The thick sections make obvious hand holds and the frame is so placed on the side of the console that it’s still an easy fit past the console through to the bow area.

If you are into your fishing then rod holders will have to be mounted on the stainless steel bimini frame or onto the rear roll bar. This is also your attachment point for ski and wake board ropes and the detachable bait board.

Your choice of power plant and drive for the Explorer 6000 Blue Water covers a broader range than most and adds to the versatility of the model. If a single outboard from 150-200hp doesn’t suit, then you can go either petrol or diesel inboard driving through a sterndrive or jet unit. The company recently delivered a Explorer 6000 Blue Water powered by a Mercury QSD 2.8 (220hp) via a Bravo sterndrive. Prior to this a similar tender powered by a 260hp Yanmar BY2 and Hamilton jet unit was delivered to the owner of the LoMoCean designed 32m Black Pearl.

Our power was the very latest Mercury 150 FourStroke, the lightest four-stroke of its horsepower and in my opinion it is one of the best engines Mercury has produced in recent years. This is a 4-cylinder engine that packs the punch of a six, yet runs great economy numbers. Computer controlled sequential multi-port electronic fuel injection helps keep the engine lean and mean when it comes to fuel usage.

My test run on the upper reaches of the Auckland Harbour saw a maximum speed on the SmartCraft gauge of 40 knots @ 5800 rpm with a maximum fuel burn of around 55L/h. When I pulled back the throttle to a more sedate 4000 rpm, the speed dropped to 27 knots, and fuel burn dropped to a very economical 23L/h. Given we had a 200-litre fuel tank and allowing for a 10% margin, we had enough fuel for a 211 nautical mile (NM) trip. 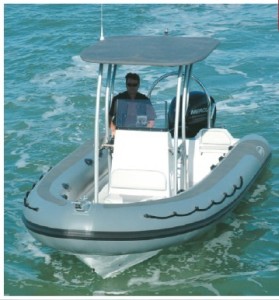 What really surprised me was at the lower end of the rpm range, the Mercury 150 proved extremely economical. At 1500 rpm – about average trolling speed – we recorded 6 knots and only 5.6L/h, giving a range of an impressive 193 NM. Acceleration was excellent with the Mercury 150, helped no doubt by the relatively large 3L engine displacement, with the three blade 17-inch pitch Enertia stainless prop biting hard and hanging on right through the rpm range. The hull handles extremely well, is light and nimble on the controls and in the smooth to light choppy sea conditions did everything right. There were no tabs on our test boat but I think they would be a worthwhile option, especially if you have the bimini with clears.

While the Explorer 6000 Blue Water has been available now for four years, for 2013, the company has made some changes, with the sheer line at the bow raised by 100mm and a new-style narrow tube design forward. The result is an improvement in the rougher water and an extremely dry boat. The Explorer 6000 Blue Watermay have found a niche market with superyacht owners and as a tender for larger cruisers, but it is now also proving popular with recreational users for diving, fishing and general family boating. In its class it’s well worth looking at.